Janhvi Kapoor Was Recently Called To Unveil The Book Of 'Calling Sehmat', A Story Based On Real-life Indian Spy Who Gave Herself A Fictional Name, Sehmat.

Janhvi Kapoor is has repeatedly been troll fodder for her fashion choices or public appearances. Recently the Dhadak actress graced a book launch occassion in Delhi and was mercilessly trolled again for an unintentional act.

The actress was recently called to unveil the book of 'Calling Sehmat', a story based on real-life Indian spy who gave herself a fictional name, SehmatÂ written by Harinder Sikka.

Celebrity photographer Viral Bhayani shared photos from the event and soon enough, netizens pointed outÂ  that the actress was holding the book upside down while unveiling of it and even when posing for papparazzi with Sikka and Naval Staff Admiral Karambir Singh.

#janhvikapoor today for a book launch in the capital #viralbhayani @viralbhayani

Needless to mention, some of the comments were unreasonably insensitive. 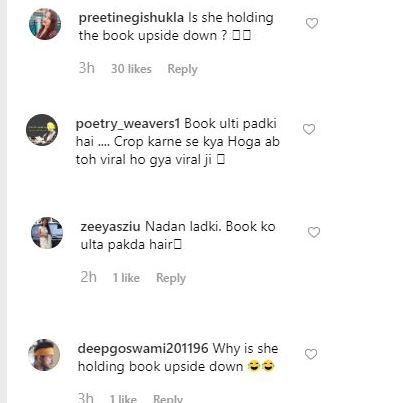 The young actress was dressed up in offwhite floral print saree for the event and looked absolutely resplendent. Some of her fans also praised her for looking a spitting image of her mother and late veteran actress Sridevi.

On the work front, Janhvi Kapoor has a slew f interesting releases fromÂ  is Gunjan Saxena biopic to horror comedy alongside Rajkummar Rao, Rooh-Afza. Janhvi a fabourite of Karan Johar will join the cast of his upcoming directial Takht alongside Ranveer Singh, Kareena Kapoor Khan, Alia Bhatt, Vicky Kaushal, Bhumi Pednekar and Anil Kapoor and Dostana 2, with Kartik Aaryan and a newcomer whose name hasn't been unveiled yet.