Filmmaker Sanjay Gupta, Who Is Currently Filming John Abraham, Emraan Hashmi, Mumbai Saga Took To Twitter To Share An Untoward Incident That He Had To Face At The Sets Resulting In The Staling Of The Films Shoot.

Filmmaker Sanjay Gupta, who is currently filming John Abraham, Emraan Hashmi, Mumbai Saga took to Twitter to share an untoward incident that he had to face at the sets resulting in the staling of the film's shoot.

Gupta, who had directed a host of films including Kaabil, Jazbaa, Shootout at Wadala via his Twitter post claimed that a political leader showed up with his "cronies" and disrupted the shoot.

"In the '80s & early '90s when we shot outside city limits invariably the local Dada, Bhai or goon would land up, disrupt shoot & demand his share. Same thing happened today on the location of #MumbaiSaga only this time the goon was a political leader with cronies from his party," he wrote.

The leader to resume shoot demanded creaking a coconut, photograph with the stars, and cash payment in exchange for his "permission". When he refused to give in to the politician's demands, the local police arrived and asked the team to pack up.

Although Sanjay had finished filming the main scene, he was very unhappy with the entire incident and stated that he would never shoot at that place again. "Fortunately for us we had finished filming the main scene. We had around 450 Jr Artists & a crew of 250 plus. Can you imagine the loss we would have to face had we not finished in time? We packed up, cut our losses & left. Don't think I'll ever shoot in that place again. Sad," Sanjay wrote. 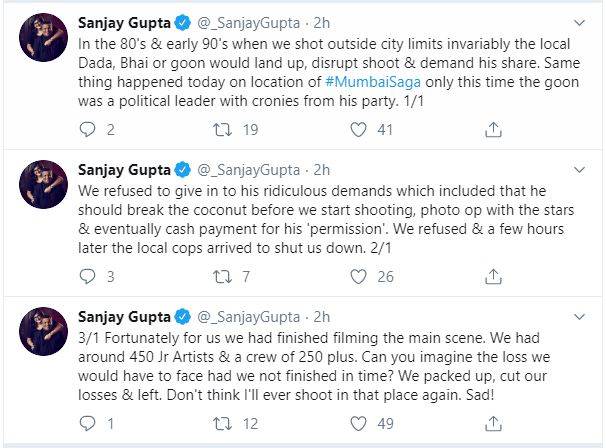 Set in the 1980s-'90s, the film revolves around all that went into transforming Bombay into Mumbai. According to the media reports, one of the leads will be playing a police officer while the rest are gangsters.

Gangster drama "Mumbai Saga", written and directed by Sanjay Gupta, will hit the theatres on June 19, 2020.

This kind of unfortunate happened didnot rock film or TV show shoot for the first time. Recently, the cast and crew of ALTBalaji's under-production show "Fixer" were allegedly attacked during its shoot.  The team members claimed they were shooting near Ghodbunder Road when they were beaten up by drunk goons.