Kangana Ranaut's sister Rangoli Chandel repeated digs on actors for not appreciating the actress after the trailer of Judgementall Hai Kya launched is getting nastier by the day. After slamming Varun Dhawn for not mentioning Kangana in his tweet, her latest prey is Taapsee Pannu and now even Anurag Kashyap has been dragged into the war of words.

Recently, Taapsee Pannu took to her Twitter page and re-tweeted Ekta Kapoor's tweet on Judgementall Hai Kya trailer. The actor tweeted, "This is so cool!!!! Always had high expectations out of this one n this looks so worth it ! #JudgementallHaiKya"

Rangoli calls out Varun Dhawan for not mentioning Kangana in tweet, CHECK out what he replied

Soon after Taapsee's tweet, Kangana Ranaut's sister Rangoli Chandel replied to her and called her a 'sasti copy'. Rangoli wrote, "Kuch log Kangana ko copy kar ke he apni dukaan chalate hain, magar pls note, they never acknowledge her not even a mention of her name in praising the trailer, last I heard Taapsee ji said Kangana needs a double filter and Tapsee ji you need to stop being a sasti copy"

Anurag Kashyap who has worked with Taapsee in several fims like Game Over, Manmaarjiyan came to her actress defense. He came up witha an apt reply to her tweet. The filmmaker tweeted, "Come on Rangoli.. this is going too far.. this is really really desperate.. I really don’t know what to say to this. Having worked with both your sister and Taapsee .. I just don’t get this ..praising the trailer means praising all aspect of it. Which includes Kangana"

Anurag taking Taapsee's side didnot go well with Rangoli, who starting bombaring her feed with multiple tweets directed towards the Gang of Wasseypur director. angoli asks Anurag not to get "desperate without understanding the real issue." She said, "Sir you can see it’s not about mentioning Kangana so much, clearly lot of people I have thanked haven’t mentioned her, it’s just that I am tired of people taking digs at her, who is this Taapsee to claim that Kangana needs double filter...." 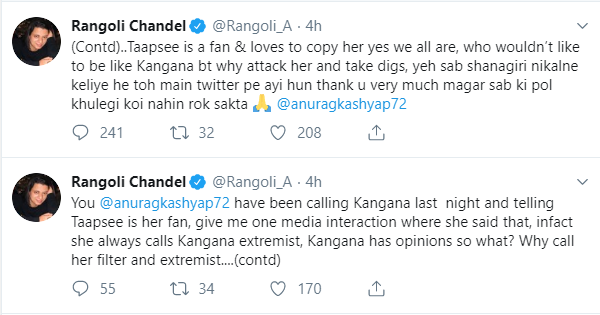 Rangoli has time and gain thrashed Bollywood celebs and enterred into a verbal battle on Twiter. earlier she has hit out on Alia, Ranbir and even Mahesh Bhatt.

Judgementall Hia Kya trailer introduces us to Bobby and Keshav, portrayed by Kangana and Rajkummar respectively. The two are suspects of a murder. Bobby is charming, paranoid and innocent, who chooses asylum over jail term. Keshav, on the other hand, moves to next door with a girl.