Bollywood Celebs From Swara Bahshkar, Anurag Kashyap To Saif Ali Khan, Akshay Kumar Received Much Flak For Their Opinions, For And Against Nationwide Protests.

Bollywood celebs received much flak for their opinions, for and against nationwide protests. While actors and filmmakers like Swara Bhaskar, Anurag Kashyap remained undeterred with all the criticism they faced, A-listers like Akshay Kumar, Amitabh Bachchan, Aamir Khan, Karan Johar chose to stay mute, leaving netizens even more enraged.

Nevertheless, Bollywood celebs enjoy huge fan base on social media profiles and anything they say creates a huge stir and so the Modi government reportedly will take recluse to the celebs to make sure that this influence remains in favour of CAA.

According to a report in Huffington Post, the Modi government has invited Bollywood’s top stars and filmmakers to a Mumbai hotel for a meeting with Piyush Goyal, the Union Minister of Railways Commerce and Industry to discuss the controversial Citizenship Amendment Act. The report suggests that it includes some big names from the industry such as Karan Johar, Farhan Akhtar, Kabir Khan, Ritesh Sidhwani, Vicky Kaushal, Ayushmann Khurranna among the invitees. As per the report, the dinner is being organised by film producer Mahaveer Jain.

Anurag Kashyap retweeted a post regarding the same made by popular YouTuber Dhruv Rathee who shared a screenshot of a message forwarded to him by a Bollywood star about the invitation for a dialogue on CAA with Union Minister Piyush Goyal. It is not clear yet as to whether the said celebrities will attend the meet. 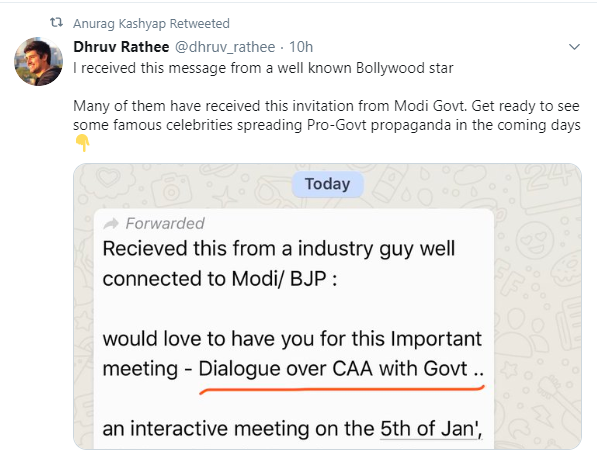