Kangana Ranaut feisty role as a national level Kabaddi player eying for a comeback was received with applause by her fans after the release of Panga trailer and now her trainer Gauri Wadekar has revealed that the actor took only weeks to become a pro in the sport.

Talking about Kangana’s prep for the role in Ashwiny Iyer Tiwari’s film, Wadekar revealed that she went through rigorous training but learnt the dodging technique  in a couple of times of observation. Gauri said, “She told me to teach her the basic moves on our first meeting itself. I was shocked as I teach young girls and even they take almost six months to reach that level of training. Kangana picked up the dodging techniques just by observing it a couple of times. I was awestruck.”

Regime and diet Kangana went through for Panga preparation

Explaining the rigours regime and the actress dedication to the process, Gauri continued, “Starting at 8 am every day, we would train for two hours. Kangana never missed a session and was punctual throughout. We shot in Delhi, Kolkata and Mumbai in different weathers, but Kangana’s dedication never wavered.”

“Kabaddi requires swift legwork, so her workout routine included squats and lunges. We trained on attack strategies, defence, how to go for the bonus and which leg to put the weight on in each position.”

Gauri explained how pre-pregnancy and post-pregnancy working and training modules were different. “She had to weigh more than usual for the post-pregnancy shoot, so for that segment we focused on gaining muscle rather than losing weight.”

How Kangana gained and lost weight for Panga 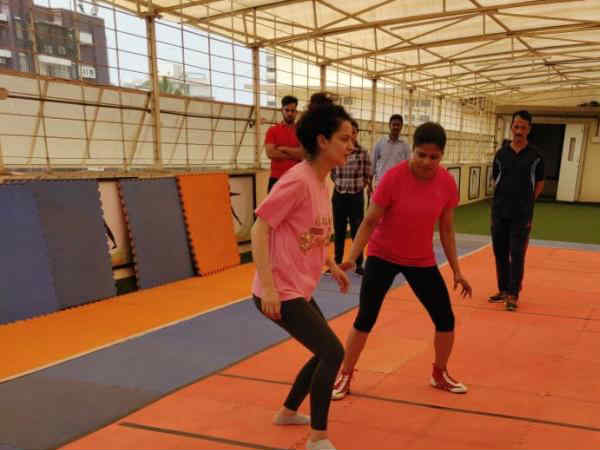 Explaining her own preparedness, Kangana said, “You need a lot of stamina in Kabaddi, just like wrestling, so I stuck to a wholesome diet that included carbohydrates, fat, raw vegetables and juices. I had to gain a lot of weight in my legs to look authentic as a raider (player who attacks from the opposing team), but I had to change it for the part where I am shown as a retired player.”

Also Read: Kangana Ranaut Reveals Panga Director Ashwiny Iyer Tiwari Used To Get Warnings To Not Work With Her

Gauri further revealed that Kangana became as good as professional players in few weeks. She said, “It was almost impossible to distinguish her from them when she was raiding. I was scared as those players could have easily tackled her.”