The Film, To Be Directed By Ribhu Dasgupta, Is An Official Remake Of The 2016 Thriller Featuring Emily Blunt.

Parineeti Chopra has started shooting for the Hindi remake of Hollywood blockbuster "The Girl on the Train".

The film, to be directed by Ribhu Dasgupta, is an official remake of the 2016 thriller featuring Emily Blunt.

Dasgupta made the announcement on Twitter.  "Hopping on to a train ride today with @ParineetiChopra," he wrote.

Meanwhile Parineeti Chopra too shared the news along with her look on the first day shoot. 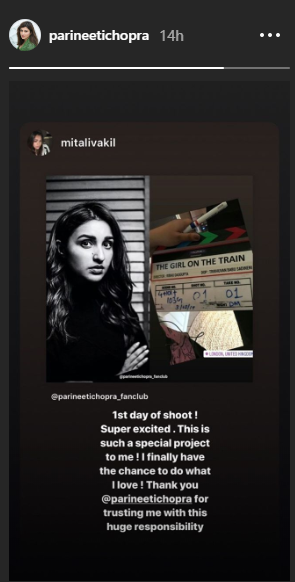 In the movie, Parineeti will play an alcoholic divorcee. The Hollywood movie tells the story of an alchohol women who gets obsessed with a stranger and then gets involved int her investigation, when she goes missing to realize the stranger has links to her past.

The role was originally played by Emily Blunt, who received critical acclaim for her performance in the 2016 film. Parineeti said the viewers will see her in a different avatar with this film.

"I want to do roles that audiences haven't seen me in before and ones that require a lot of prep and homework, which is why 'The Girl On The Train' really worked for me. The character is an alcoholic and a victim of abuse, and I haven't explored anything like her on screen before," she said in a statement.

The yet-to-be-titled film, based on Paula Hawkins' 2015 bestseller.

It is produced by Reliance Entertainment. Set in the UK, the film will also feature Aditi Rao Hydari, Kirti Kulhari and Avinash Tiwari.  The makers are eyeing a 2020 release.

The Girl On The Train Parineeti Chopra Emily Blunt