Bollywood’s Diva Priyanka Chopra’s Wedding To American Singer Nick Jonas Has Turned Out To Be An Exotic And Fun-filled Vacation. The Quantico Star, In Her Instagram Stories, Shared A Picture And Video Of The Wedding Party Playing Cricket Inside The Wedding Venue, Umaid Bhawan Palace In Jodhpur On Saturday.

Priyanka Chopra and Nick Jonas’s wedding has revoked Lagaan all over again! Surprised much? Well, don’t be. Bollywood’s diva Priyanka’s wedding to American singer Nick has turned out to be an exotic and fun-filled vacation. The Quantico star, in her latest Instagram stories, shared a picture and video of the wedding party playing cricket inside the wedding venue, Umaid Bhawan Palace in Jodhpur on Saturday.

The match was played between #TeamBride and #TeamGroom. In the pictures, Nick can be seen carrying the bride in his arms as the other men from the wedding party pose for a group picture. The video shared by Priyanka featured Nick hitting the ball, and the actor captioned it as “It’s a six #CRICKET”. 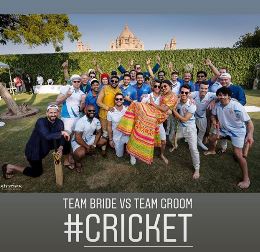 Priyanka, on Saturday shared pictures of her Mehendi ceremony. While Priyanka’s brothers carried her 'dulha' on their shoulders, the actor looked every bit of beauty in a fabulously folksy, multi-hued organdy ensemble by Abu Jani Sandeep Khosla. Dancing and cheering their way, the 'baaratis' seem to enjoy the Indian festivities with sheer jubilance. Nick looked his handsome self in an aqua bakhiya Indian traditional attire, also by the same designer.

The ‘Desi Girl’ took to her Instagram account to share the gleeful pictures of both the families, immersed in the joyous occasion. She also stressed upon how, for an Indian bride, Mehendi ceremony is one of the most important festivities.

One of the most special things that our relationship has given us is a merging of families who love and respect each other's faiths and cultures. And so planning our wedding with an amalgamation of both was so so amazing. An important part of the pre wedding rituals for the girl in an Indian wedding is the Mehendi. Once again we made it our own and it was an afternoon that kicked off the celebrations in the way we both dreamed. @nickjonas

Following the extravagant dual wedding of Deepika Padukone and Ranveer Singh, Priyanka and Nick will also have two nuptials ceremony. After the Christian wedding, the couple will now have a Hindu traditional ceremony on Sunday.

Priyanka is expected to wear an Abu Jani Sandeep Khosla outfit for her Hindu wedding.