Rangoli This Time Has Targeted Aamir Khan, Javed Akhtar Shabana Azmi And Accused Them Of Running A Negative Campaign Against The Film

Kangana Ranaut’s sister and spokesperson Rangoli Chandel has praises for Kareena Kapoor but cannot stand industry stalwarts who did not come in support of Manikarnika: the Queen of Jhansi. Known for her outspoken tweets Rangoli this time has targeted Aamir Khan, Javed Akhtar Shabana Azmi and accused them of running negative campaign against the film. After she was done bashing them, she also revealed that Kangana will make her directorial debut with Ayodhya.

Rangoli started her Twitter banter with praising Kareena Kapoor for her positive comments about Kangana. “Actresses are braver now. Be it Kangana or Vidya, they are all taking different paths and relevant roles. It is such a good time for women in the movies,” Kareena was reported to have said by one of her Twitter fan accounts.

“Appreciate Kareena ji for working with the likes of papa jo (Karan Johar) having good friendships with movie mafias yet she never demonised or ignored Kangana’s contribution to cinema, says what she feels, true blue star, beta alia ananya and all papa jo changu Magnus leant something from her. She supported Kangana during Manikarnika also her first directorial, when Jhansi ki Rani came alive and delivered one of the highest grossers of last year, magar papa jo and bolly Islamic extremes did everything to destroy the film and not a word from them, respect for Kareena ji,” she said.

“The way you treat others get ready to be treated the same way, you gonna attack Manikarnika we will attack Gully Boy then don’t cry humari pol khol di (you outed us), give respect get respect, stop targeting Hindu martyrs films and give them their due, peace shall prevail,” she added.

“Kangana always knew elite movie mafia who looked at outsiders as poor and Hindi speaking people but she never knew dirty Islamic extremists mafia who will destroy anyone who try to bring glory of Hinduism back ... well you all messed with the wrong person,” she said. “You guys have only made her determined to bring back lost glory of Bharat, get ready for her first directorial .... Ayodhya .... Jai Shri Ram,” she added. Kangana also got primary director’s credit for Manikarnika in 2019. 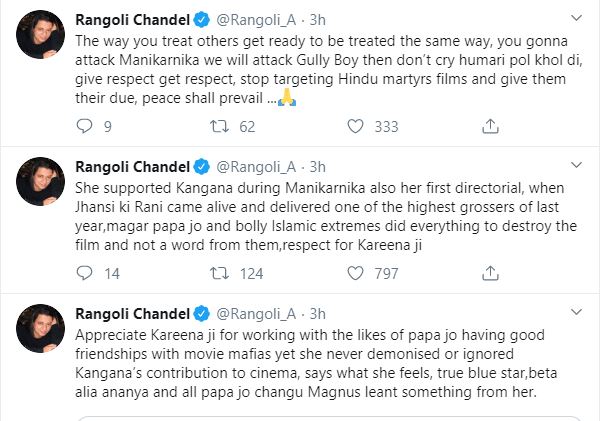 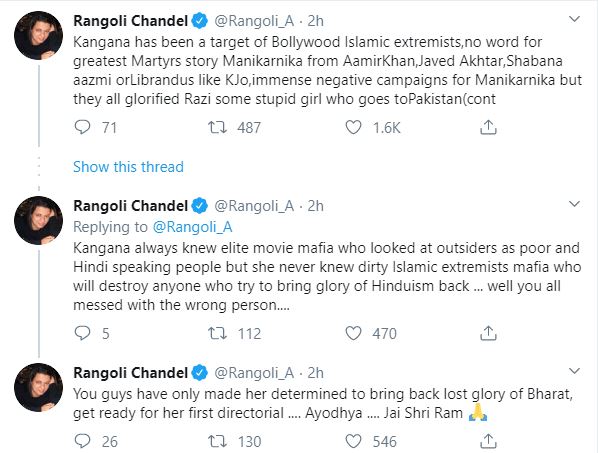 It was reported in November that Kangana would turn producer for a film titled Aparajitha Ayodhya, which revolves around the lonf-running Ayodhya case. Kangana stated that the film will pay tribute to the unwavering faith of devotees and how the country continued to remain a nation of believers.

A few months back Kangana started her production house, Manikarnika films. The actress is currently shooting for Thalaivi, Jayalalitha’s biopics that releases in this year.