Ranveer Donned A Black Tee And Trousers And Teamed It Up With A Hot Pink Overcoat That Looked More Of A Cross Between A Raincoat And Abubble Wrap.

Ranveer Singh's sartorial fashion choices have raised many eyebrows in the past. Recently the actor was spotted at the office of Dharma production and the actor's attire has sent her fans in a state of frenzy trying to comprehend the style statement he wants to make.

The actor donned a black tee and trousers and teamed it up with a hot pink overcoat that looked more of a cross between a raincoat and abubble wrap. While we still wonder what he was flaunting if it is preventive clothing for the erratic Mumbai weather or a new fashion trend that he wants to start to have a look at his bright ensemble.

Some of his fans who cannot make out his wacky fashion choice commented that he has swapped wardrobe with wife, Deepika., while others called it a designer raincoat appropriate for New York streets. not Mumbai. 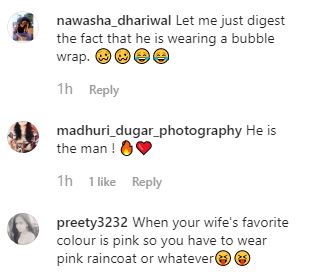 Ranveer who is shooting for the Mumbai schedule of Kabir Khan sports drama based on India's 1983 Cricket World Cup win will also feature in Karan johar's upcoming directorial, Takht. The period drama will see him essay the role of Dara Sikoh, Shah Jahan's son in a story about the battle for succession of the throne.

Meanwhile, Deepika Padukone wrapped her portion of shooting for  83. Padukone is essaying the role of Kapil's spouse Romi Dev, while her real-life hubby Ranveer Singh will be seen playing the legendary cricketer in the film. While makers earlier wrapped up the London schedule of the film with Singh, Padukone finished her part in Mumbai yesterday.