The Post Originally Belongs To A Facebook Page 'Humans Of Hindutva' That Runs A Disclaimer, Laughter, Empathy, Fun And Friendship Are Not Part Of Our Culture On Its Bio.

Sonam Kapoor has stirred the hornet's nest yet again. Ahead of the release of her movie, The Zoya Factor', the actress has invited much flak from Twitteratis over a post she shared on her Instagram handle. The post originally belongs to a Facebook page 'Humans of Hindutva' that runs a disclaimer, "Laughter, empathy, fun and friendship are not part of our culture" on its bio.

"The average Indian has more in common with the average Pakistani than he does with a Hindu fundamentalist who wants to bomb in the name of Ram and lynch minorities and rally in support of child rapists. (sic)"

Advocating the agenda of peace it further said, "Ordinary citizens everywhere just want to have a normal life and go to work and raise their children well and save up for a decent home." 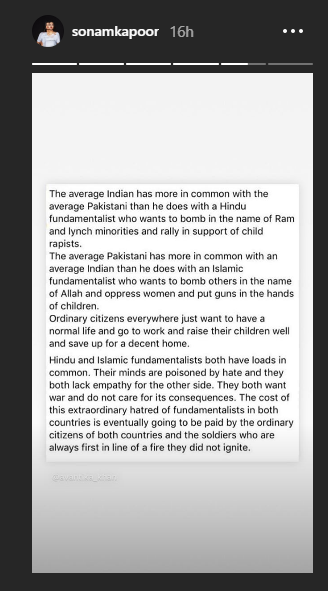 Sonam Kapoor's post comes at a time when war clouds loom large on India and Pakistan, who are actively engaging in aerial retaliation. The post was also shared by Avantika, wife of 'Delly Belly' actor Imran Khan on her Facebook page.

Soon after Twitter users expressed their displeasure with the content of the post and accused them of propagating "anti-Hindu" rhetoric. A Twitter user accused the celebrities of using the agenda of "a bigoted Facebook page". His tweet has been re-shared several times, with some users calling the move "anti-Hindu" in nature.

Humans of Hindutva is a page known for its humorous takes on political issues. The administrator of the page had temporarily suspended activity on Facebook in 2017 allegedly due to receiving threats, reported Firstpost.