After Sharing Their Vacation Pics From Ladakh, Sushant Features In Rhea's Instagram Stories On Her Birthday On Monday.

Tinsel town's latest rumoured couple Sushant Singh Rajput and Rhea Chakraborty and no longer shying away from some public show of affection. After sharing their vacation pics from Ladakh, Sushant features in Rhea's Instagram stories on her birthday on Monday.

Taking to Instagram, Rhea shared a video of herself cutting the birthday cake. She wrote, "Gratitude. Happy happy to me , so much excitement tiny glitch in this video! Ps - I got a new haircut." While the video only featured Rhea, we got to see a glimpse of boyfriend Sushant on her Instagram story.

Gratitude 🙏 Happy happy to me , so much excitement = tiny glitch in this video ! Ps - I got a new haircut 😅 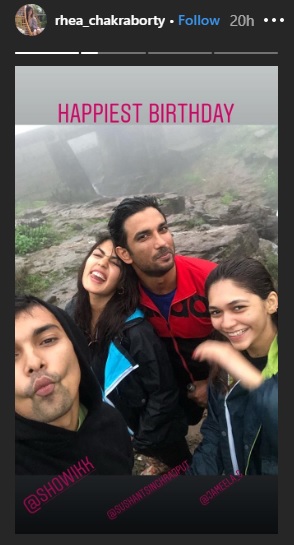 In on of her Instagram story birthday girl Rhea and Sushant can be seen posing with friends as they enjoy incessant Bombay rains. The actress called it her 'happiest birthday'

Earlier it was reported that Sushant has found love in Rhea and the two were spotted together at multiple instances. Rhea too was caught visiting Sushant's Mumbai flat many times. Rhea has also been spotted outside Sushant Singh Rajput's house quite a few times.

A source told an entertainment portal, "Sushant is currently seeing Rhea Chakraborty. They have known each other for a while and they hit it off really well in the last few weeks. In fact, things moved from one thing to the other quite quickly and now, they are already dating each other."

Sushant has earlier on June 29th posted a picture from Ladakh where he has written that he has to plan an important party. We now know  it was for Rhea's birthday. Rhea also commented on the picture with some ghost emojis.

Facts dont change, situations seldom do, a thought, however, could be changed, even, right now... #selfmusing In between eating too much last night :)), playing badminton right now to drop some weight for today's shoot :((, to thinking about planning an important party...Good morning 🤗❤✊💥🙏

Before Rhea, Sushant has been linked to Sara Ali Khan and Kriti Sanon. Meanwhile, on the work front, Sushant Singh Rajput is awaiting the release of Chhichhore. The film also stars Shraddha Kapoor, Varun Sharma, and Prateik Babbar.

Rhea Chakraborty, on the other hand, was last seen in 2018 film Jalebi.