Taapsee Pannu trolled for less dialogues in â€˜Badlaâ€™; her reply is EPIC!

Taapsee Pannu Known For Her Bold And Unapologetic Persona Retaliated In The Most Sassy Manner And With Utmost Sarcasm.

Taapsee Pannu recieved much appreciation for her layered role in Badla that went to emerge as a commercial success garnering Rs 138.49 crore on the box office. However, haters and trolls always find out ways to drag down celebs to their pit for one vague reason or another.Â

Recently, a troll advised Taapsee to have more conversations, or dialogues in her upcoming films, and not just agree with the opposite characters.

Taapsee Pannu known for her bold and unapologetic persona retaliated in the sassiest manner and with utmost sarcasm.Â

She tagged Badlaâ€™s director Sujoy Ghosh and without attacking the troller in a subtle manner mocked his advice. She held her director responsible for the lack of â€œchatar patarâ€ even if the scenes didnâ€™t really demand that. â€œ@sujoy_g y didnâ€™t u make me to more naa mein haan or haan mein naa for that matter need more chatar patar (even if itâ€™s without any reason) in the next one. are u clear??? Performing with no dialogues n all is bullshit, got it (sic),â€ she posted. 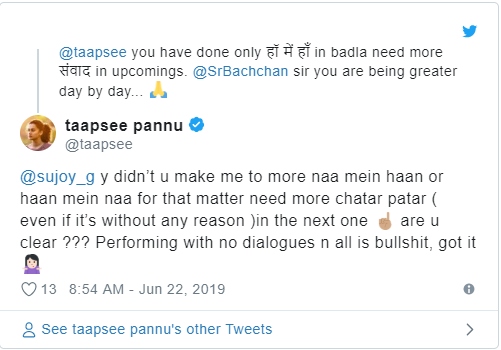 Taapsee made a mark for herself representing uncconventional roles in movies like Pink, Mulk, Badla and recently released Game Over. With Badla and Game Over we can safely assume she is the reigning queen of thriller movies. Taking clue from her back to back power-packed performances, here's keeping our fingers crossed for her upcoming slew of releases, Mission Mangal and Saand ki Aankh.