Marjaavan actress Tara Sutaria got several tongues at the tinsel town wagging attended Amitabh Bachchan’s Diwali party together and the to Malika Arora’s birthday bash hand in hand. Now the duo has more ways to display affection as they took to Instagram to inform fans that they were at Mumbai U2 concert together.

Aadar and Tara’s Insta stories almost confirm their relationship. Aadar took to his Instagram story to share a video of U2 performing their smash hit Beautiful Day at their concert in Mumbai on Sunday night, and wrote, “When I’m with you…@tarasutaria.” Tara reshared it on her own Instagram story and wrote, “Always with you,” followed by a heart. 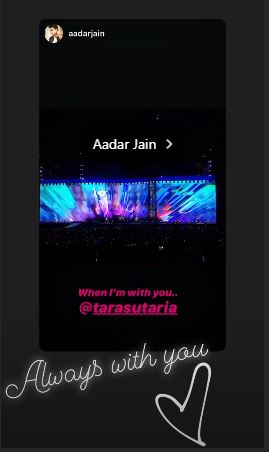 Tara who was earlier linked with Sidharth Malhotra in an earlier interview, neither confirmed nor denied dating Aadar. “Well, we really enjoy each other’s company,” was her response throwing subtle hints ta their special bond.

“It’s important to say this, we enjoy going out and spending time together. Aadar is special to me and both of us are foodies, so we are going to be spotted at restaurants. We met for the first time last Diwali and have a lot of mutual friends,” she added.

Armaan, made his Bollywood debut in 2017 with Habib Faisal’s Qaidi Band. He is yet to sign another film after his first film tanked at the box office. Meanwhile, Tara made her debut alongside Ananya Panday in Punit Malhotra’s Student Of The Year 2, earlier this year.