Thappad: Taapsee Pannu Has Befitting Reply For Man Who Finds It Illogical That One Slap Can Lead To Divorce

Anubhav Sinha’s ‘Thappad’ Starring Taapsee Pannu Is Trying To Fix Everything That Is Wrong In A Relationship But Is Considered ‘normal’ ‘usual’ In The Garb Of Love.

Anubhav Sinha’s ‘Thappad’ starring Taapsee Pannu is trying to fix everything that is wrong in a relationship but is considered ‘normal’ ‘usual’ in the garb of love. Although, the movie has opened to positive reviews, a part of the audience stand divided on its subject and storyline that promotes, even a single slap’ is not ok in a relationship.

After negative twitter trends tried to mar the release of the film, one such video in which a man can be seen explaining why the film is illogical, now gone viral. He says there was no true love if Taapsee's character sought divorce over 'just one slap' almost trying to re-establish Kabir Singh director Sandeep Reddy Vanga’s though-process i.e. It's not true love if you cannot slap your love one.

“In one slap, if you give divorce, that means there was no love at all. And the scene is such that the slap happens accidentally while taking away the phone," the man can be seen saying in the video.  "There is no logic at all. If it happened situationally, it is not that big a point," he further justifies. Talking about Kabir Singh, the man said, "In Kabir Singh, he comes with aggression to pick up from the college again and again, but there was love between them."

When Taapsee came across this viral video, the actress had a befitting reply for the man and his point of view. Quipping how she was feeling bad for the man's girlfriend/wife, she wrote, "I hope she is ready to be hit coz it’s all in love n humour". 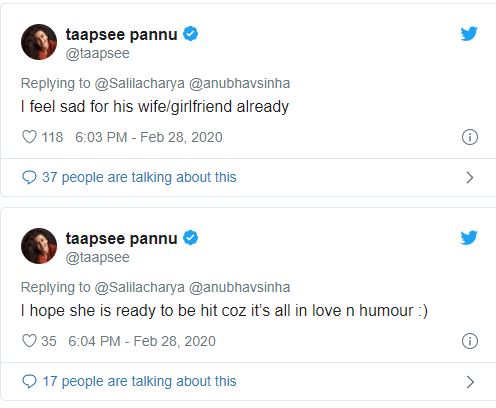 Meanwhile filmmakers are stars are lauding the film and called it a must watch. Javed Akhtar called the movie an important milestone in Indian cinema