Tigmanshu Dhulia Alleges His Niece Was Harassed By Drunk Boys On Train, Claims Helpline Number Were Of No Help

According To Tigmanshu Dhulia Account, His Niece Was On A Train, Uday Express, That Was Bound For Bengaluru Where â€˜four Drunk Boys' Were Harassing Her And No Helpline Came To Her Aid.

Filmmaker Tigmanshu Dhulia recently took to his social media account to allege that his niece was harassed on a train. According to the filmmaker’s account his niece was on a train, Uday Express, that was bound for Bengaluru where ‘four drunk boys' were harassing her and no helpline came to her aid.

Taking to Twitter, Tigmanshu wrote: “My niece is travelling in udyan express to Banglore berth B3 she is being harassed by four drunk boys no helpline numbers are responding and she is scared can someone help.” A number of Twitter users wrote back; one user tagged @RailMinIndia @RailwaySeva in her retweet, asking for help, while another person wrote, “Minister @PiyushGoyalji, Kindly have a one single social account for such safety related complaints. A person has to tag so many handles. And pray dt one of them would respond. Also, please take note of why Helpline numbers were not responding.”

Expressing his disappointment about the Indian railways helpline system, the ‘Gangs of Wasseypur’ actor said, that they were of no use. Replying to his tweets, the Twitter handle of Indian Railways wrote back, asking him to share the helpline number which he dialled and which did not responding. It said: “Sir, it would be really grateful if you share the helpline number which was not responding.”

Soon the issue was resolved and he thanked Indian police and India’s ‘jugaad’ system for swinging into action fast. He wrote: “Thank you all for responding I am really great full no help line numbers worked but eventually like in india Jugaad kiya and cops came she is safe now thanks again guys.” He further continued, “I want to thank the police and the concerned department for responding quickly but I would still say that the helpline numbers were of no use thank you all for the support from the bottom of my heart.” 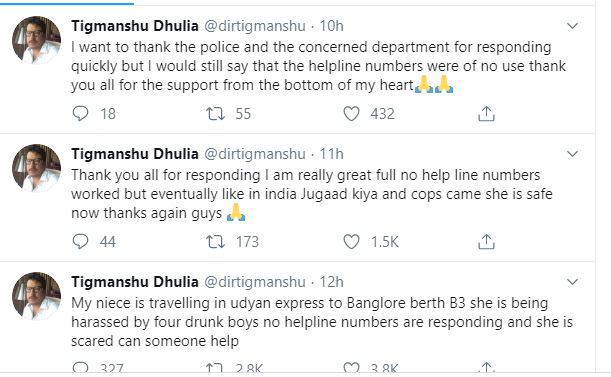 Meanwhile, the Indian Railways in the beginning of this year announced one integrated helpline number for its passengers for grievances and inquiry during railway travel. The news helpline service will be available in 12 languages.

"Indian Railway has integrated railway helplines into single number 139 for the passengers for quick grievance redressal and inquiry during their journey. As the new helpline number 139 will take over all the existing helpline numbers (except 182), it will be easy for the passengers to remember this number and connect with Railways for all their needs during the travel," Railway statement said.