Ananya Panday Is Just A Film Old And The Young Actress In Going Places Signing Up With Big Bollywood Directors One After Another.

Ananya Panday is just a film old and the young actress in going places signing up with big Bollywood directors one after another. All set for the release of Mudassar Aziz’s Pati Patni Aur who, Ananya recently has left subtle hints of the next director she is working with and its none other than filmmaker choreographer Farah Khan.

Sharing Farah Khan's post on her Instagram story, the 'Student of the Year 2' debutant wrote, "We love u!! My next director''. 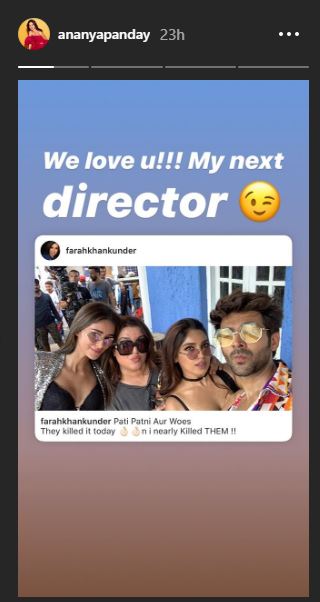 The post featured Ananya with her co-actors posing with Farah. Any details about the project are still under wraps.

Pati Patni Aur Woes They killed it today ðŸ‘ŒðŸÂÂ»ðŸ‘ŒðŸÂÂ»n i nearly Killed THEM !!

Meanwhile Farah along with Rohit Shetty as her producer is in the conceptualising stage of Satte Pe Satta remake and reports are doing round that Hrithik Roshan has been finalised to get in Hrithik Rohan show for revisiting the cult 70s movie. Since the film will be a multi-starrer with an ensemble cast we can keep our hopes high that Ananya has been roped in for one of the roles in the mass entertainer.

Refreshing your memory, Farah a few years back shocked netizens when she took a jibe at Chunky Panday. Chunky's wife Bhavana had shared a picture of their gorgeous daughter Ananya, and Farah, in her usual tongue-in-cheek style, had commented, "Do a dna test pls.. shes too lovely to b chunkys child (sic)."

There were whispers that the Pandays were offended and Farah had taken the joke too far He responded to the jibe and told Hindustan Times, "Farah is a darling friend and I know what she meant. She actually called Ananya beautiful. So I take that as a compliment. Also, Farah, Sajid [Khan] and I have a dark sense of humour, so we often crack such jokes about each other."

Ananya currently in filming for 'Khaali Peeli' which commenced earlier in September. The Maqbool Khan directorial has 'Dhadak' star Ishan Khatter opposite Ananya and is bankrolled by Ali Abbas Zadar and Zee Studios.