Akshay Kumar Commutes By Mumbai Metro For 20 Minutes; Gets Slammed After Sharing Experience

After Amitabh Bachchan, Akshay Kumar Became A Victim Of Twitter Ire When He Shared A Video Of Travelling In Metro 'quietly' And Reaching His Destination On Time Without Being Recognised And Mobbed.

After Amitabh Bachchan, Akshay Kumar became a victim of Twitter ire when he shared a video of travelling in Metro 'quietly' and reaching his destination on time without being recognised and mobbed.

The 'Kesari' actor shared his experience of travelling in a Mumbai Metro train from Ghatkopar to Versova via video post. In his own words, he travelled "like a boss" by beating peak hours traffic. The journey that would have taken him about two hours in his car took only 20 minutes in the Metro train.

"I am in the Metro. I came here quietly. I was shooting in Ghatkopar and from there I wanted to go to Versova which would have taken two hours, five minutes according to the map," Akshay Kumar said.

Sharing that it's his upcoming film' Good Newwz' director Raj Mehta's idea to take the metro, the actor said that he took 1-2 security guards and not is sitting quietly without being recognised.  He also praised Mumbai Metro for being the only transportation that runs on an elevated path and doesn't get affected even if there is water-logging underneath it.

My ride for today, the @MumMetro...travelled #LikeABoss from Ghatkopar to Versova beating the peak hours traffic ðŸ˜Ž pic.twitter.com/tOOcGdOXXl

A few hours after his tweet, the actor got slammed for his support to Mumbai metro that will be constructed by slashing 27,000 trees in the arrey forest. One of the Twitterati called him 'hypocrite' for 'crying over the burning of  Amazon Rainforest and now smartly justifying the cutting of Aarey forest' 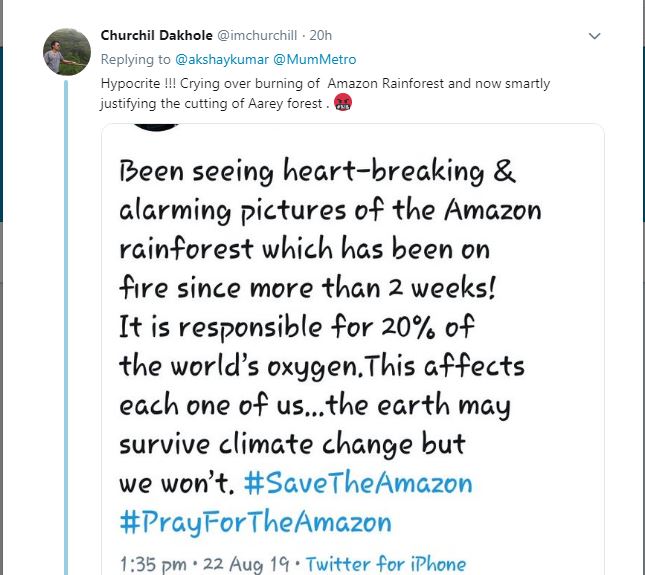 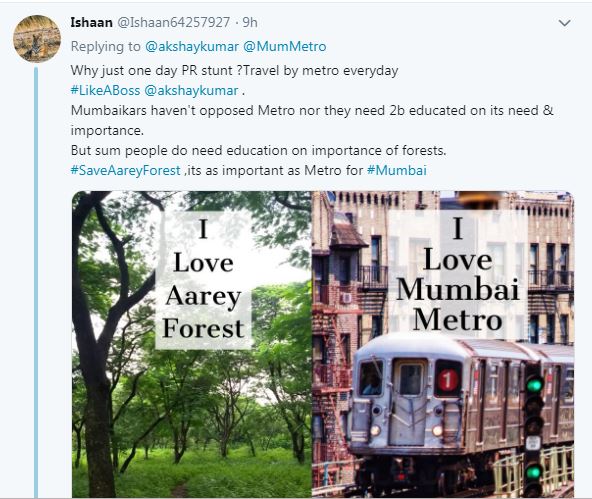 Protesters, menwhile,  stood outside Amitabh Bachchan's bungalow at Jalsa, to protest against his post, and held posters in support of Aarey forests.

T 3290 - Friend of mine had a medical emergency, decided to take METRO instead of his car .. came back very impressed .. said was faster, convenient and most efficient .. ðŸ‘ÂÂÂ
Solution for Pollution ..
Grow more trees .. I did in my garden .. have you âÂÂÂ¤ï¸ÂÂÂ

Bollywood is indeed divided on this issue. While celebs like Amitabh and Akshay are welcoming the drive, others like singer Lata Mangeshkar, Dia Mirza, Raveena Tandon, Malaika Arora, Randeep Hooda, Esha Gupta and comedian Kapil Sharma among others, have been opposing it.

Meanwhile, Mumbai Metro authorities thanked Akshay by tweeting: "We are really ecstatic that you could rely on #MumbaiMetro to beat the traffic and travel #LikeABoss. Thank you. #HaveAGreatEvening."