Noted Bengali actress and newly-elected Trinamool Congress MP Nusrat Jahan, who got hitched with long time beau and businessman Nikhil Jain in a hush hush ceremony held in Turkey last month, on Thursday hosted a lavish reception at ITC Royal, Kolkata. Nusrat and Nikhil's much-awaited reception had an impressive line-up of guests and marked attendance of several bigwigs from the film industry as well as politics and business.

Those prominent figures also include West Bengal Chief Minister and Trinamool Congress president Mamata Banerjee, who was seen posing with the newlyweds at the star-studded affair this evening. The picture, which is doing rounds on social media platforms also features actress and Trinamool MP Mimi Chakraborty and party leader Kalyan Bandhopadhyay.

While Nusrat stood out in a maroon ghagra, Nikhil looked dapper in a black sherwani. Mimi was looking elegant in a stylish green lahenga with a touch of black while Banerjee was in her preferred outfit - a white cotton saree with a narrow mono-coloured border. Whereas, Kalyan Bandhopadhyay was sporting a simple white Kurta and Pyjama. 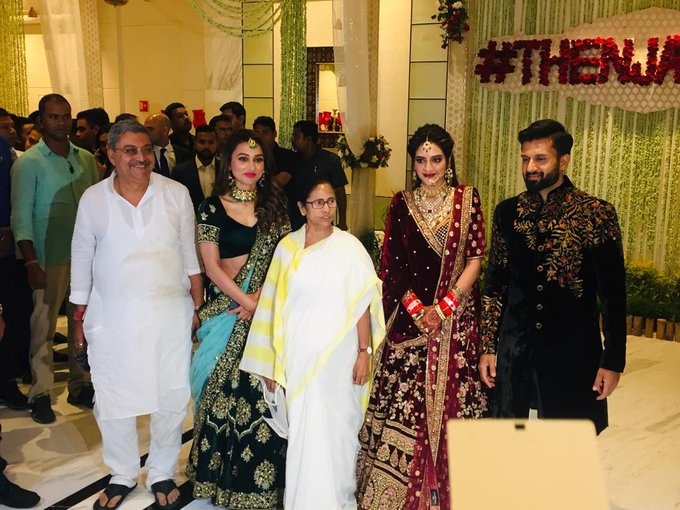 Talking about the menu, served at the couple's grand reception ceremony, a source close to the development told IANS, "The cuisine is a mix of Italian, Bengali, pure vegetarian and non-vegetarian dishes. The vegetarian section is being planned carefully keeping her in-laws' (who are Jains) guest list in mind. But the actress is taking care of the Bengali food section as she loves hilsa, prawn and bhetki preparations. Delectable biryani will be there for sure".

"Nusrat has a sweet tooth so she is taking special care of the Desserts. Special Makha Sandesh from Basirhat is a part of the menu along with several sweets fused with mangoes," the source added.

Early in the day, Nusrat and Nikhil, accompanied with Mamata Banerjee, attended an ISKON Rathyatra festival where they performed Hindu rituals, including pulling the chariot of Lord Jagannath, in a gesture loaded with symbolism. 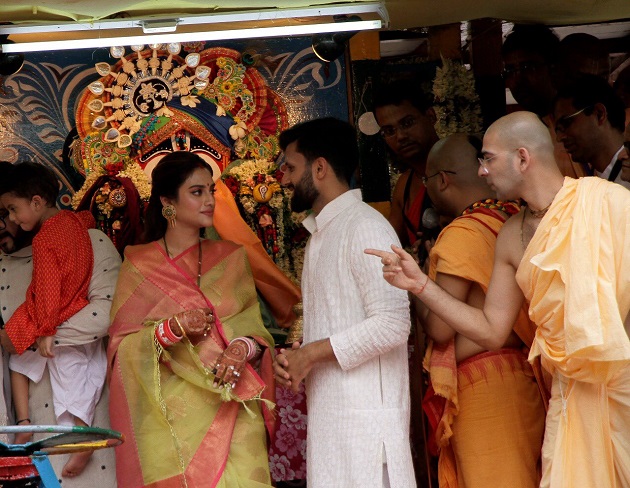 Last month, both Nusrat and Mimi, who were among the first time MPs in the 17th Lok Sabha, gave a miss to the oath-taking ceremony as the member of Parliament owing to the wedding festivities in Turkey.