Actress Sri Reddy Has Reportedly Made A Sensational Allegation Against Tollywood Actor And Producer, Vishal Krishna. Notably, Sri Reddy Became A Huge Sensation In Tollywood Ever Since She Made Serious Accusations On Several Telugu Actors.

Actress Sri Reddy is a very popular star across the film industry. She became a huge sensation in Tollywood ever since she made serious accusations on several Telugu actors. Continuing with the same, Sri Reddy has reportedly made a sensational allegation against Tollywood actor and producer, Vishal Krishna.

Sri Reddy has recently taken to Facebook and alleged that Vishal has exploited several female actresses. Swearing on her mother and her career, she further challenged Vishal to prove her wrong. In her Facebook post, Reddy also claimed to know 3 victims of Vishal and said that she is not wrong.

The actress has also made the same allegations against Raghava Lawrence, ARM, Srikanth and Sundar C.

In Facebook post, she said, “I know 3 of your victims..I am a real roaring lion u can’t compare your self with me..please be real vishal, it’s a small life.” 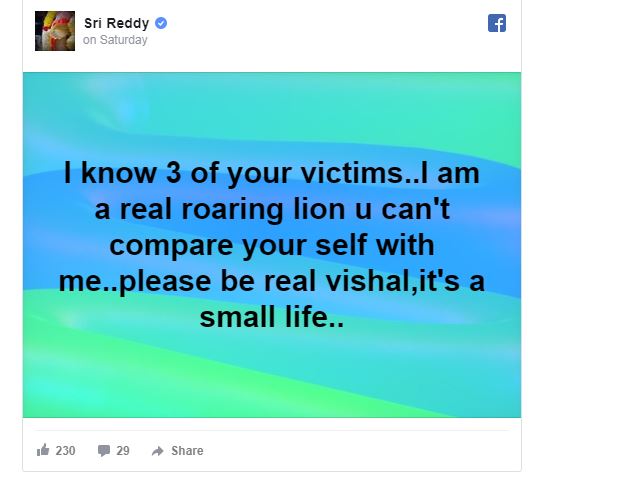 “Who are voting to vishal,purinjuko he is a big fraud..puriyadha?? trust me I am not saying lies my mother swear, my career Swear,” the actress added. 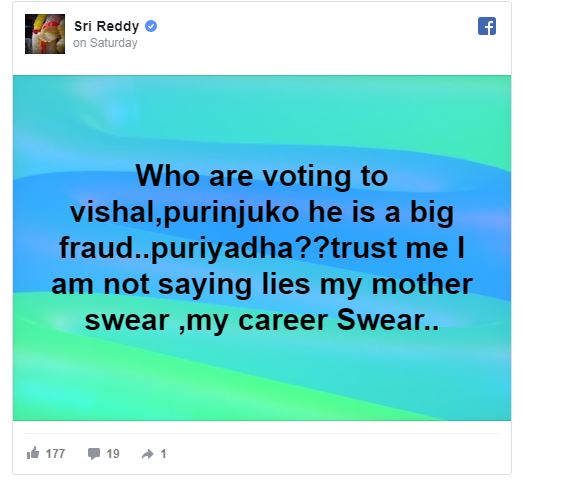 In her usual scrambled sentences, Sri Reddy has also raved that she doesn’t care if Vishal destroys her career or even murders her.

In the meantime, the social media users are wondering that it’s an attempt to tarnish the image of the Nadigar Sangam secretary at the time of the elections.

Previously, Sri Reddy had participated in a nude protest on the issue of sexual exploitation in Tollywood. The film body Movie Artistes Association (MAA) had banned Sri Reddy for the protest. However, Apoorva had actively supported Sri Reddy’s protest. The protest forced MAA to set up a Committee Against Sexual Harassment. It further revoked the ban on Sri Reddy.