Ever Since The News Of Four Accused Being Killed In An Encounter Came Out, Many People Started Expressing Their Happiness On Social Media As Justice Has Been Served To The Victim And Her Family.

The nation on Friday woke to the shocking news of all four men accused of raping and killing the Hyderabad veterinary doctor in cold blood were allegedly shot dead in a police 'encounter' in Hyderabad on Friday. The four accused, who were in the police custody, were taken to the scene of crime, to recreate the sequence of events.

Ever since the news came out, many people started expressing their happiness on social media as justice has been served to the victim and her family. Apart from commoners, Tollywood and Bollywood celebrities like Nagarjuna, Rakul Preet Singh, Rishi Kapoor, Anupam Kher too reacted on the encounter and appreciated police’s quick action.

This morning I wake up to the news and JUSTICE HAS BEEN SERVED!! #Encounter 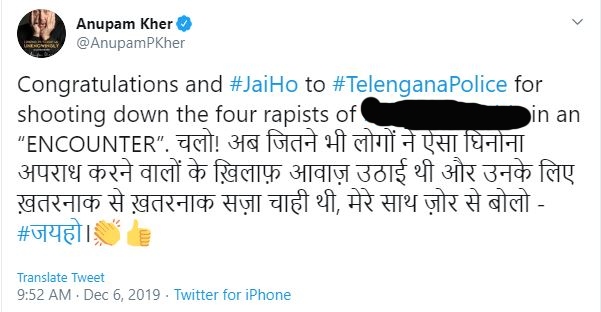 Sources told News Nation that during the crime recreation, an accused suddenly snatched the weapon of one of the policemen and tried to escape. The cops say that in ‘self-defence’, the accused were shot dead. The ‘encounter’ took place at National Highway 44 around 2:30 am.

Cyberabad Police Commissioner VC Sajjanar has confirmed the news about the ‘encounter’. “All four accused in Hyderabad rape-murder case killed in crossfire,” Sajjanar was quoted as saying by news agency PTI.