After the fun-filled wedding ceremonies Rajeev Sen and Charu Asopa Sen are making the most of their Thailand pre-honeymoon.

The lovebirds after tying knot in a grand ceremony on June 16 headed off to the exotic, picturesque tourist country of Thailand. Before moving on to their super-romantic pre-honeymoon pictures, let us give a recap of their dreamy destination wedding that took place in Goa.

Chilling at a luxurious resort of Thailand, Rajeev and Charu were taking a plunge together in a swimming pool which offered a breathtaking view. The lovebirds raised temperature with their romance and shared a passionate lip-lock in the pool.

Recently, Charu Asopa Sen and Rajeev Sen were subjected to trolls when they had posted pictures from Thailand zoo, posing with a sedated tiger. The pictures caught animal lovers' ire on social media who criticised them for subjecting the animal to cruelty. 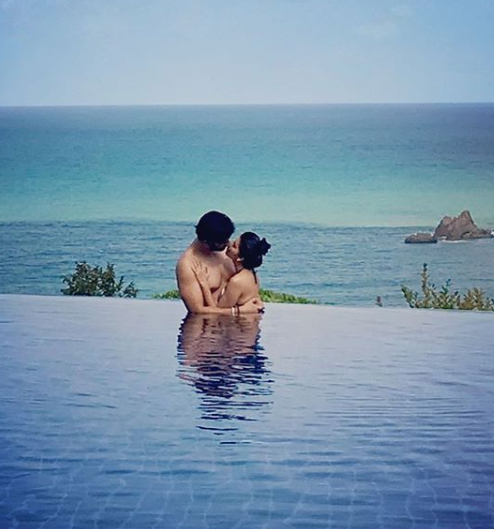 In one of the pictures, the tiger’s leg was wrapped around Charu's neck as she pouted for the camera. While a user wrote, “Celebrities promoting this. Hope they would research on the cruelty netted every single day on these tigers kept in captivity”, the other one commented, "These poor, magnificent animals are drugged and caged and their claws and teeth are removed and kept in such pathetic conditions. And not just that, the flashes from cameras spoils their vision. They are wild animals and they need to live and thrive in the wild, they are not playpets. My heart breaks for these majestic animals. Shame on these people. Keep them in cage for promoting this business".

And they lived happily ever after❤️

Rajeev and Charu tied the knot at Taj Exotica in Goa in the presence of family and friends.  The festivities kicked off on June 14 with engagement followed by the Sangeet and wedding as per both Bengali and Rajasthani rituals. Rajeev and Charu will be soon heading to the Far East for a mini-break before the fly to Europe by July-end for their honeymoon. The two first met at a party and have been dating each other since then.

We now can't wait for their exotic Europe vacay pics.