Indian Idol 11 has become a subject for controversy first for bringing #MeToo accused Anu Mallik as its judge and then for putting spotlight more on contestant’s personal life then on their talent to create a kind of drama like other reality shows Nach Baliye or Bigg Boss.

But it’s this video from the upcoming episode that has courted controversy again bringing the sing reality show to spotlight again. In the video that has received much outrage from fans, one of the contestants on the show comes with gifts for Neha Kakkar and asks if she recognises him. She figures out who he is and happily accepts the gifts.

In a turn of events, the contestant f not being able to hold back his sudden burst of emotions forcibly kisses Kakkar on her cheek and everyone looks shocked at this.

Neha then walks away soon after -- as if she isn’t too pleased with the gesture.

The news of this incident has been trending on the internet since the promo went out. The channel has not made anything clear as to if the the contestant was reprimanded or if any actions were taken against him by the how producers over the incident.

You have watched some incredible performances last weekend. this weekend will take music and entertainment one level up. Do not miss out this weekend's episode of #IndianIdol at 8 PM. #EkDeshEkAwaaz. @adityanarayanofficial @nehakakkar @vishaldadlani @anumalikmusic

A post shared by Sony Entertainment Television (@sonytvofficial) on Oct 16, 2019 at 1:22am PDT

People have reacted strongly to this incident and have compared the gesture to a kind of sexual assault. They are also calling out the contestant for stooping so low and trying to kiss a judge. 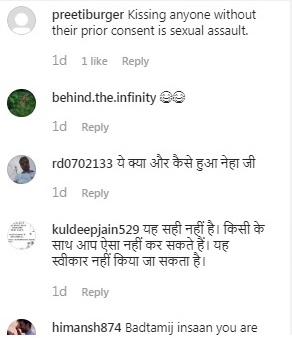 This is not the first time celebs got embroiled in such a kind of unfortunate incident. In 2006, singer Mika landed himself in trouble after forcibly kissing Rakhi Sawant. The incident saw Mika forcibly landing a kiss on Rakhi Sawant's lips during his birthday bash. Rakhi filed a case of molestation against the singer.