Set in the 17th centuary, the biographical film is based on the life of Tanaji Malusare, a military leader in the army of Maratha ruler Chhatrapati Shivaji Maharaj. (Photo Credit: Fact Check: Did Ajay Devgn Donate Tanhaji's First Day Collections To Ayodhya's Ram Temple? )

Bollywood megastar Ajay Devgn’s home production ‘Tanhaji: The Unsung Warrior’ is minting money at the box office. Latest numbers show that Devgn’s 100th movie has already made grand entry in the ‘Rs 100-crore’ club. With critics and public lauding the power-packed performances of the actors in the film, a strange claim is doing rounds on social media. Several people are sharing a tweet that claims Devgn donated the first day collections of ‘Tanhaji’ for the construction of Ram Mandir in Uttar Pradesh’s Ayodhya.

News Nation also came across one such tweet. The Twitter handle that goes by the name of ‘@aanjna111’ posted the claim along with the still form the movie. The profile of this Twitter handle says that it belongs to the IT Team of ‘All India Aanjna Samaj’. Neither it is verified nor it has many followers. Another thing that we noticed was that this Twitter handle had shared maximum tweets from right-wing channel ‘Sudarshan News’. 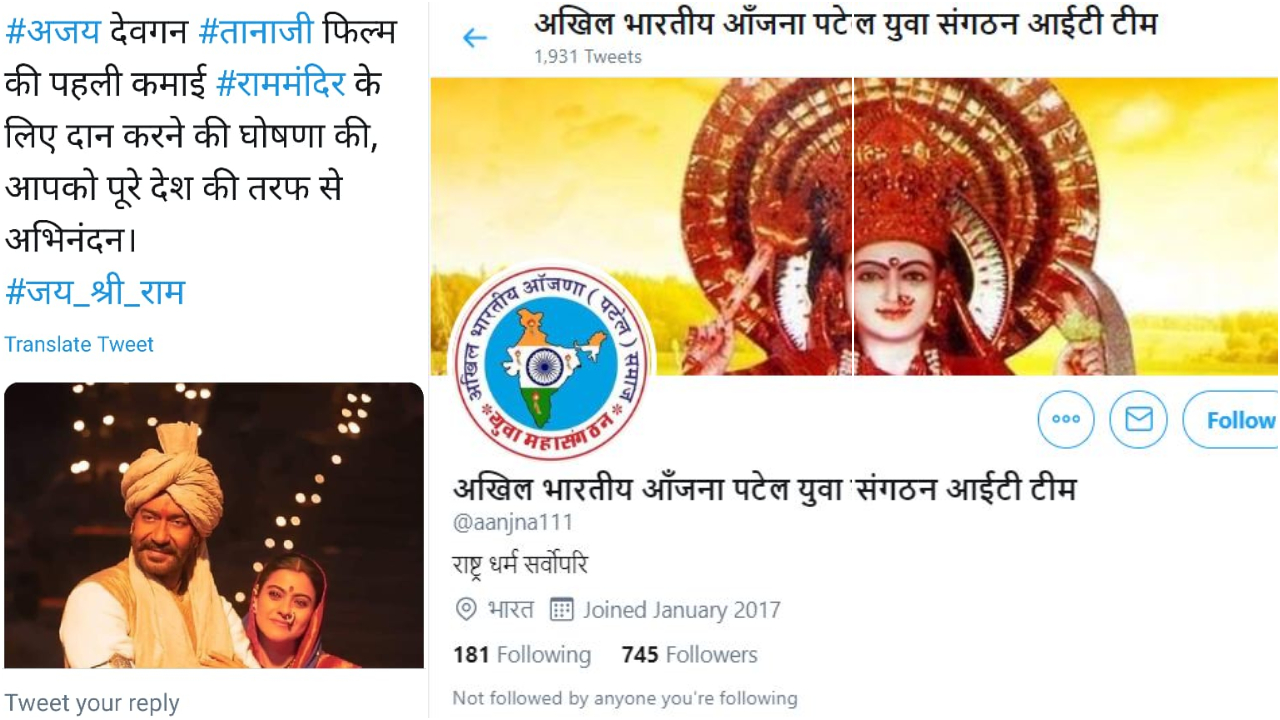 News Nation can independently confirm that this claim is ‘FALSE’. Neither Ajay Devgn nor his production house has made such a remark. The last time Devgn said anything on social media about Uttar Pradesh was thanking the state government for declaring Tanhaji tax-free. He had also urged Chief Minister Yogi Adityanath to watch the movie.

Set in the 17th centuary, the biographical film is based on the life of Tanaji Malusare, a military leader in the army of Maratha ruler Chhatrapati Shivaji Maharaj. Talking about the film, Ajay had earlier said, ''You have to be careful and honest to history. After from being careful, we followed the history. If someone asks us questions we can show that it is a part of history.'' "When you play the part of Tanhaji, who has been a such a big warrior hero, the responsibility is more. It is important you do not portray such characters wrongly," he added.

This is not the first time that claims have been made on social media about donation to Ram temple. Shortly after the verdict was pronounced in the Ayodhya case, a news went viral that the Tirumala shrine is donating whopping Rs 100 crore for the construction of Ram Mandir in Ayodhya. In fact, several social media posts on Twitter and Facebook had claimed that thanks to this money, the construction of grand temple of Lord Ram will commence shortly.

However, News Nation tried to find out about this announcement and come to a conclusion that no such pledge has been made by Tirumala Tirupati Devasthanam Board. In fact, some other fact-checking sites such as Alt News and Boom Live also carried the rebuttal by Tirupati Temple. “In reply to your email, above message is truly false. As of now, TTD doesn’t take any official decision for donating amount to Ram Mandir in Ayodhya,” the Trirupati PRO was quoted as saying by Boom Live on question of the Rs 100 crore donation.