Fact Check: If You Like Modi Then Read Hitler - Truth Behind 'Suggestion' At Mumbai Book Stall

However, A Close And Detail Look At The Tweet Will Not Take Much Time To Point Out Some Disparity In The Picture.

There were several occasions when Prime Minister Narendra Modi was compared to Nazi Party leader Adolf Hitler. People also highlighted similarities between the ideologies followed by Hitler's Nazi party and those of the Indian right-wing organisation Rashtriya Swayamsevak Sangh (RSS) many a time. However, the latest such attempt to compare the two leaders was something you would have never thought of.

A photograph, featuring two books - one on PM Modi and the another on German extremist leader Hitler, placed together on a shelf at Mumbai airport, is doing rounds on social networking sites. However, the reason behind the photo going viral is not the books, but a box beside the two. Yes, a black box placed between the books, indicates with arrows that if someone likes the book on Modi, the person should try the piece on Hitler.

The tweet, which was shared by one Ashish @Ashishonmap), has already garnered 2,900 likes and has been retweeted 1,200 times. The comment thread has been also flooded with different remarks from Twitterati across the world. "Saw this on Mumbai airport," it reads. 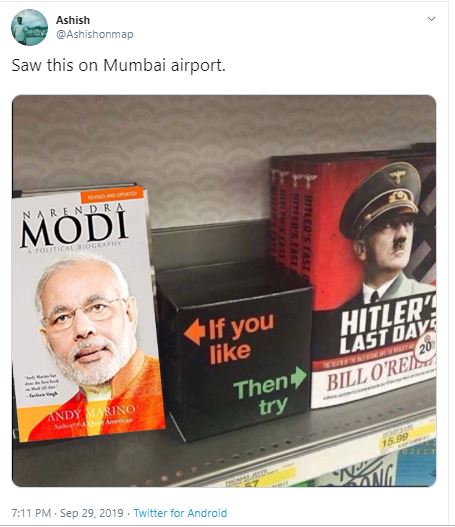 However, a close and detail look at the tweet will not take much time to point out some disparity in the picture. For instance, the price tag seen in the bottom right corner of the book on Narendra Modi is quite mysterious. The tag has listed the cost of the book in foreign currency, nullifying the claim that these books were seen at the Mumbai airport. If observes carefully, one can also discover that the picture of Modi is simply copy pasted on the original book cover. Therefore, the picture showing Modi and Hitler alongside on two book covers is clearly photoshopped.

Notably, the original book placed on the shelf is written on United States President Donald Trump and an article comparing Trump with Hitler was published by The Poke, a British satirical website, back in 2016. It seems like, the twitter user Ashish had simply copied the article image and replaced the Trump's image with that of Narendra Modi. 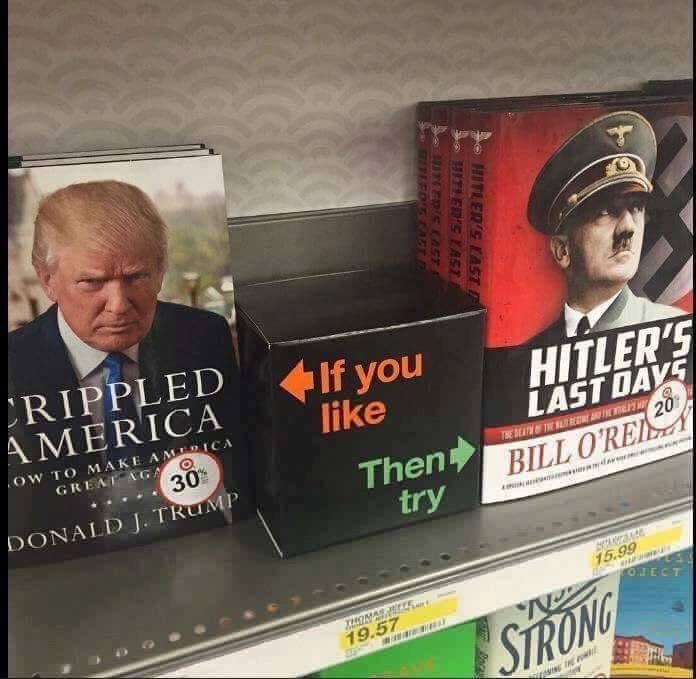 READ | PM Modi wants to do to India what Adolf Hitler did to Germany: Mallikarjun Kharge

There are several articles, photos and videos available on social media sites, highlighting some strange similarities between Modi and Hitler. While some of those contents are fake like this one, others tried to give some logic, lame though, in support to their claims.