Fact Check: Is This Boy Sleeping Between Graves Of His Parents?

Facebook Page POWER THOUGHTS Shared The Image With The Caption That Reads, One Of The Most Sad Images Of The World: A Syrian Child Sleeps Between The Graves Of His Mother And Father. The Photo Is Viral On Facebook.

When our Fact Check team in News Nation started investigating the image, we found that the viral image is from Saudi Arabia and was clicked by Abdul Aziz al Otaibi as a part of his art project in the year 2014. 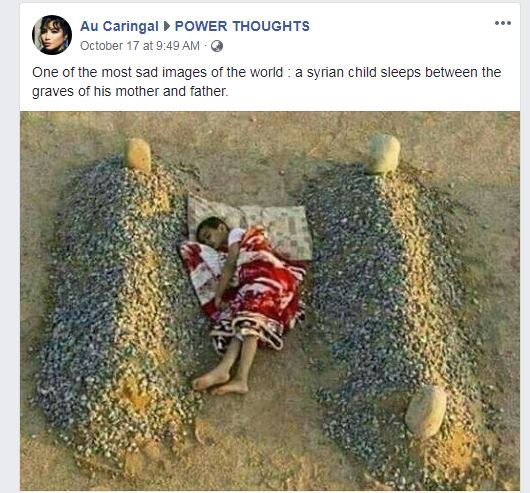 Facebook page "POWER THOUGHTS" shared the image with the caption that reads, "One of the most sad images of the world: A Syrian child sleeps between the graves of his mother and father." The photo is viral on Facebook.

HOW WE CHECKED THE AUTHENTICITY OF THE IMAGE:

To verify the claim, we ran a reverse search. The photo was part of an art project by photographer Abdul Aziz al Otaibi. He clicked these images in Saudi Arabia back in 2014. Interestingly, we also found that the image is neither from Syria nor the piles of stones are actually graves.

This is not the first time that this images had gone viral. Earlier in 2014 also the same claim  was made.

At that time, Otaibi clarified through his interview. He said, "The picture has nothing to do with Syria, nor this child is an orphan. I wanted to show in pictures how the love of a child for his parents is irreplaceable. This love cannot be substituted by anything or anybody else, even if the parents are dead." 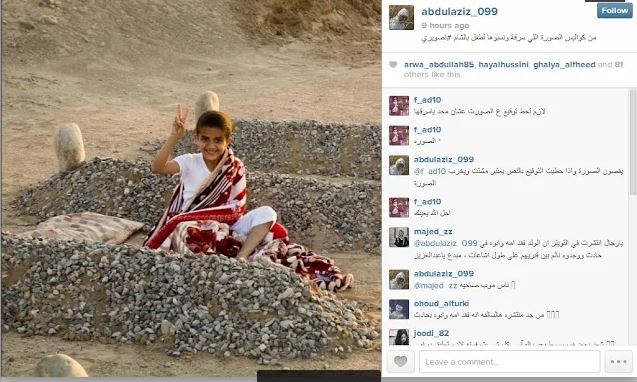 Otaibi said, "I went to the outskirts of Yanbu, 250 kilometre away from Jeddah. I build two piles from stones that looked like graves. I asked the son of my sister to lie in between these artificial graves and cover him with a blanket. Of course, I would never ever put a child between two real graves."

Otaibi had posted the pictures on his Facebook account. He also posted the picture of the boy smiling next to the graves and also published the backstage story of the photos. However, a few days later a Twitter handle @americanbadu posts the picture with the claim that the picture is from Syria. The tweet went viral within minutes.