The Video Was Also Circulated On Social Media With Claims That It Shows Police Action On People Protesting Against CAA And NRC.

Imran Khan on Friday shared a video showing police brutally beating up people. The Pakistan Prime Minister claimed that this video showed police brutality against Muslims in India's Uttar Pradesh. His caption with the video read: "Indian police’s pogrom against Muslims in UP." The clip shows police in anti-riot gear rounding up and beating protesters. Some of these protesters are even seen to die during the action.

The same video was also circulated on social media with claims that it shows police action on people protesting against the newly amended citizenship law and National Register of Citizens (NRC) in Assam. However, in reality, the video is an old video being shared as evidence of police actions in Assam, Uttar Pradesh and other places.

However, a little research show that the video is not related to CAA or NRC protests or even India. A close look at the video clearly shows the insignia on the police uniforms and shields is RAB. The RAB or the Rapid Action Battalion is an elite wing of the Bangladesh police.

Here's the video (Warning: visuals may be disturbing)

Indian police's pogrom against Muslims in UP. pic.twitter.com/BOYKFVKJzB 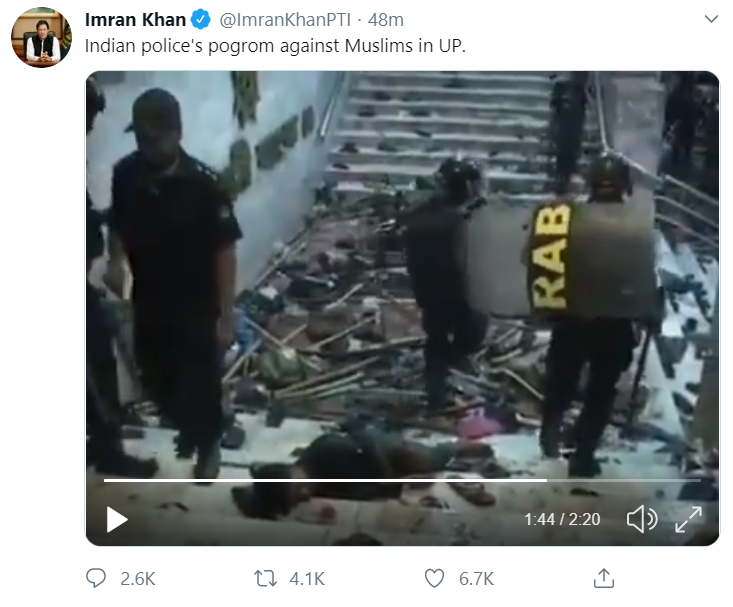 A reverse image search of one of the keyframes of the video takes one to another video. It was uploaded on Dailymotion almost seven years ago. The description of the video said, 'Joint force killed more than 3000 innocent Hefajot Activists while sleeping at May 6 morning between 2.30 am to 4.00 am.' The same video is on YouTube also. Further research shows that the video may have been of violent clashes between police and religious hardliners in May 2013. 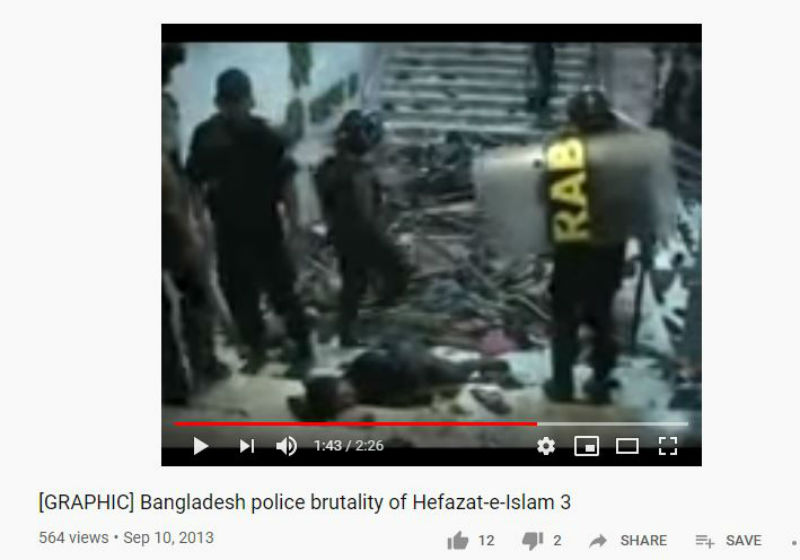 The Ministry of External Affairs on Friday slammed Pakistan Prime Minister Imran Khan for peddling "fake news" after he tweeted a video of what he claimed was police action in Uttar Pradesh but turned out to be of an incident in Bangladesh. Khan shared the video on his Twitter handle claiming that it was of police violence targeting Muslims in UP. He captioned it --"Indian police's pogrom against Muslims in UP".

Twitterati soon called out the Pakistan prime minister for tweeting fake news to target India. Later, the tweeted videos were deleted from his account.

"This is not from U.P, but from a May, 2013 incident in Dhaka, Bangladesh.The RAB (Rapid Action Battalion) written on the vests at 0:21s, 1:27s or the Bengali spoken, or these links would help you be better informed," Uttar Pradesh Police wrote on the microblogging site, tagging Khan's tweet.