The Terms Which Were Being Compared As Part Of The Analysis Include Indian Air Force, Pakistan Air Force, Balakot, Surgical Strike And LoC.

Hours after the IAF's 12 Mirage 2000 aircraft supported by a fleet of Sukhoi 30 jets struck three Jaish-e-Mohammed (JeM) terror camps across the Line of Control (LoC), a comparison of Google searches showed that the search interest for the Indian Air Force (IAF) was higher than that of the Pakistani Air Force (PAF) among the people in Pakistan. As per the trends, the graph of Google searches for Indian Air Force remained above than the graph for its Pakistani counterpart all over the day in most part of Pakistan.

The terms which were being compared as part of the analysis include Indian Air force, Pakistan Air Force, Balakot, surgical strike and LoC. While 'surgical strike' was the most popular term in India, the most searched term in Pakistan was 'Balakot', according to the search graphs of five terms in India and Pakistan.

In Pakistan, search trends for the term 'Balakot' started gaining traction around 7:40 am. In India, the corresponding time for popularity for the same term was around 8:50 am. By 10 am the search trend for Balakot peaked in Pakistan, while Indians were reportedly searching for the term 'surgical strike'. 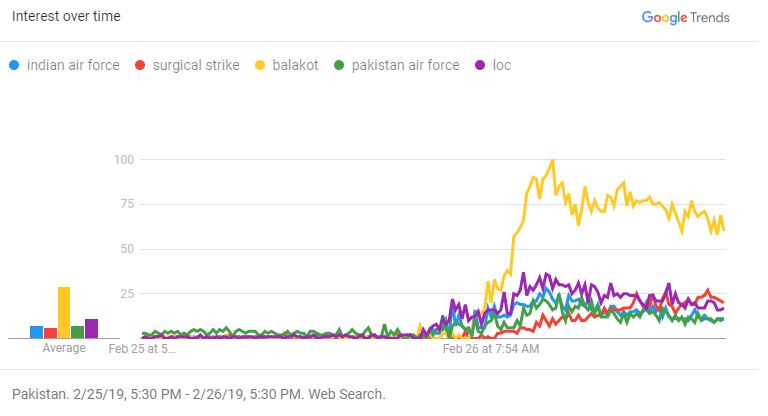 The Pakistan Army on Tuesday first broke the news of the Indian Air Force (IAF) crossing the Line of Control (LoC) in Muzafarabad sector.

Soon after, the Indian media picked up the information and confirmed that the Indian Air Force (IAF) decimated Jaish-e-Mohammed's Alpha 3 Control Rooms located in Balakot, Muzaffarabad and Chakothi in Pakistan Occupied Kashmir (Pok). More than 10 bombs were dropped by the multi-role fighter jet Mirage 2000 at around 3:30 am on Tuesday. Understandably, Pakistan downplayed the airstrike.

The pre-dawn airstrikes, being touted as the 'Surgical Strike 2.0', came amid heightened tension between India and Pakistan following the February 14 suicide attack by Pakistan-based Jaish-e-Mohammad (JeM) terror group that killed as many as 42 CRPF jawans in Jammu and Kashmir's Pulwama district.