Asked Whether There Is Any Possibility Of Kumar's Comeback In The Bihar Grand Alliance, Manjhi Clearly Stated That Currently He Has No Differences With The Bihar CM And The 'mahagathbandhan' Will Later Discuss The Matter.

The gathering comes amid reports of strain in ties between the JD-U and the BJP following the former's decision to opt out of the newly formed Narendra Modi government. Upset over BJP's offer to allocate only one Cabinet berth to JD-U, Bihar CM and party chief Nitish Kumar announced his decision not to join the Modi government 2.0.

In the meantime, Kumar's attendance in Manjhi's Iftar event has given a further boost to the speculations of early fissures in the NDA. Though the Bihar CM has repeatedly stressed that there is no 'resentment' between the allies, speculations have been rife that Kumar may snap its ties with the BJP and join hands with the RJD-Congress-led Grand Alliance in Bihar, like he did in 2013. 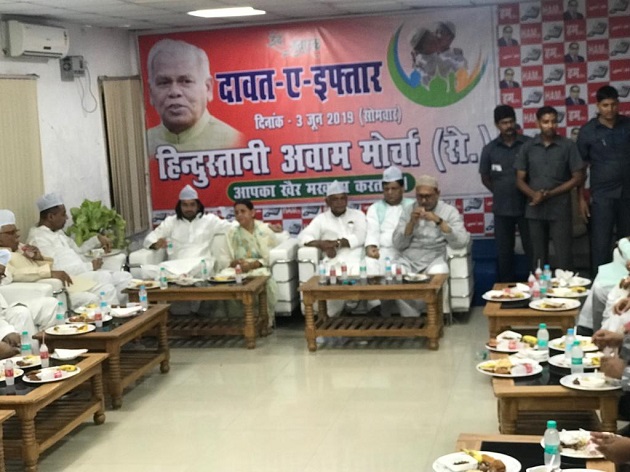 Asked whether there is any possibility of Kumar's comeback in the Bihar Grand Alliance, Manjhi clearly stated that currently he has no differences with the Bihar CM and the 'mahagathbandhan' will later discuss the matter.

Former Bihar chief minister Rabri Devi, who was also present at Monday's Iftar event held at Manjhi's Patna residence, did not elaborate much on Kumar's return, but said only 'mahagathbandhan' will take a decision on whether it will forge a new alliance with the Kumar-led JD-U or not.

In the recently concluded Lok Sabha elections, the JD-U won 16 seats in Bihar, while the BJP bagged 17. In its worst ever performance since 1997, the RJD drew a blank in the general elections wherein the Congress bagged one. Bihar has a total number of 40 Lok Sabha constituencies.

Despite being a part of the NDA, the JD-U was also not part of the last central government led by Prime Minister Narendra Modi. The BJP, however, is sharing power in Bihar with its leader Sushil Kumar Modi as the state's Deputy Chief Minister.