This Is Amit Shah's Second Visit To His Home State In The Week During Which He Would Spend Times With His Family Members In Ahmedabad.

Union Home Minister Amit Shah, who is on a day-long personal visit to Gujarat, on Wednesday underwent minor surgery for a lipoma on the back of his neck at a private hospital in Ahmedabad. A lipoma is a slow-growing, fatty lump that is most often situated between the skin and the underlying muscle layer.

Shah, also the BJP president, was successfully operated for lipoma on the back of the neck under local anaesthesia and has been discharged after the minor surgery, the party said, quoting a statement by KD Hospital, Ahmedabad.

READ | Communication Restrictions In Kashmir To Be Lifted In 15 Days: Amit Shah To J-K Delegation 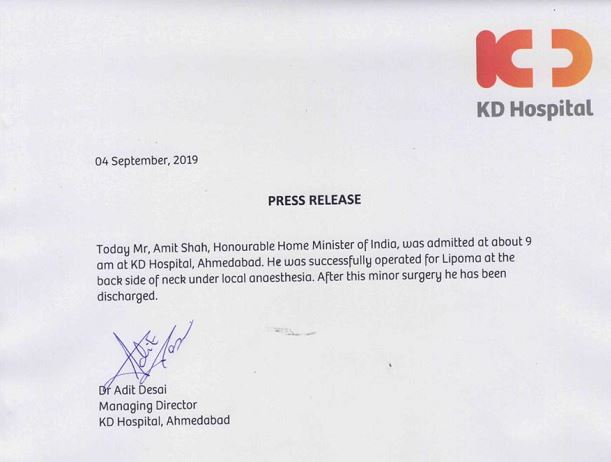 This is Shah's second visit to his home state in the week during which he would spend times with his family members in Ahmedabad. The home minister reached the city airport on Tuesday night and is reportedly stayed at his residence as no engagements have been lined up for the day.

Sources, however, said that the Gandhinagar MP would meet party leaders and government functionaries at his residence to discuss various issues, including the ensuing by-elections on seven Assembly seats in Gujarat and state BJP’s preparations for the 'Rashtriya Ekta Abhiyan'.

The Abhiyan is aimed at spreading public awareness about scrapping provisions of Article 370 of the Constitution that granted special status to Jammu and Kashmir.

Shah was in Gujarat on August 29 to take part in a host of events, including a convocation ceremony. On September 1, he visited the neighbouring Union Territory of Dadra and Nagar Haveli to inaugurate and lay the foundation stones for various development projects.