Hello and welcome to Monday's live blog. From politics to sports to entertainment, the Internet is buzzing with the breaking news and headlines from across the globe. While the inaugural session of the 17th Lok Sabha has begun at Parliament today, World Cup fever sweeps the nation, where cricket rules the hearts of million. Here in this segment, News Nation brings you live news from all corners of the world. The latest stories will appear in our live blog below - so keep scrolling down.

#10:30 pm: 15 people were injured after their bus met with an accident at Islamabad Road, near Shahpur in Poonch earlier today.

#10:10 pm: Union Health Minister has instructed to set up a 100-bed paediatric ICU at SKMCH, by State Govt. In adjoining dists, 10 bed paediatric ICUs will be set up with support from Centre, so that such cases can be given exclusive treatment & there's no unnecessary load on facilities at SKMCH.

Rajasthan: Doctors remove more than 80 items including keys, coins & 'chillam' among other items from a patient's stomach in Udaipur. pic.twitter.com/zrT4iHcvu0

#09:00 pm: Major Ketan Sharma lost his life in an encounter between security forces and terrorists in Anantnag today.

#08: 38 pm: We extend our heartfelt gratitude to the CM. After an enormous movement, the meeting and discussions with our CM met a logical end. Considering everything we expect the govt to solve the issues as discussed in due time: Junior doctors of NRS Medical College & Hospital

#08:13 pm: I will write a letter to the Prime Minister tomorrow: West Bengal Mamata Banerjee on if she will attend meeting of presidents of all political parties called by Prime Minister on 19th June.

#07:35 pm: Prime Minister Narendra Modi arrives for the BJP Parliamentary Board meeting at the BJP headquarters.

#07:25 pm: Death toll due to Acute Encephalitis Syndrome (AES) in Muzaffarpur rises to 104.

#7:00 pm: An IED blast took place while a security forces' vehicle was moving in Arihal, Pulwama. Police at the spot ascertaining the facts: Jammu & Kashmir.

#06:30 pm: BJP leader Dr CP Thakur raises questions on Bihar govt & CM Nitish Kumar over the issue of death due to Acute Encephalitis Syndrome. In his press release he states that govt comes into active mode only at the time of outbreak,when it should've been active beforehand to prevent it

#06:20 pm: One terrorist neutralized in anantnag operation, arms & ammunition recovered. Identity and affiliation of the terrorist being ascertained.

#5:35 pm: Children from entire Bihar come to Muzaffarpur,no.of ICUs need to be increased. 1-3 children are being treated on same bed,shows lack of resources.If we work on it now,situation will be under control next year: Muzaffarpur MP Ajay Nishad on deaths due to Acute encephalitis syndrome.

#05:15 pm: Blackbox of crashed AN-32 damaged, data retrieval for accident probe may get delayed.

#04:55 pm: West Bengal Mamata Banerjee directs Kolkata Police commissioner Anuj Sharma to deploy a nodal police officer in every hospital, during the meeting with representatives of doctors at Nabanna.

#04:50 pm: A case has been registered against Union Health Minister Dr Harsh Vardhan and Bihar Health Minister Mangal Pandey in Muzaffarpur for not spreading awareness about Acute Encephalitis Syndrome (AES) prior to the outbreak.

#04:15 pm: Our teams are stationed there&are working from the very first day. I have gone there&met the patients. I even went through their case sheet and spoke to doctors in details: Health Minister Dr Harsh Vardhan on deaths in Muzaffarpur, Bihar due to Acute Encephalitis Syndrome

#01:55 pm: Jodhpur Court acquits Salman Khan in case against him for submitting fake affidavit in the black buck poaching case that he lost the license documents of his weapons, though the license were sent for renewal. Salman's counsel argued his intention wasn't to submit false affidavit.

#01:40 pm: BJP Parliamentary board to meet at 6 pm today at party headquarters.

#01:33 pm: Shyam Rajak, Bihar Minister when asked if CM Nitish Kumar will visit SKMCH, Muzaffarpur where more than 80 patients have died due to Acute Encephalitis Syndrome (AES): Everything is being monitored by CM. What is important? Monitoring and treating the patients or him visiting here?

The City Civil and Sessions Court, Mumbai has issued notice on the application filed by Nirav Modi's counsel and has now adjourned the matter on June 25 for reply and hearing on the application. https://t.co/NIEDVpZiBg

#01:26 pm: Nirav Modi to be declared a fugitive matter was fixed for hearing today at City Civil and Sessions Court, Mumbai. Nirav Modi's counsel filed an application that case can only be tried by a court designated under the Prevention of Money Laundering Act and Prevention of Corruption Act.

#01:10 pm: Metropolitan Magistrate Court, Bandra, has acquitted actor Vidyut Jamwal in a 2007 assault case. He was accused of smashing a bottle on a Juhu resident’s head.

#01:01 pm: Delhi CM Arvind Kejriwal on the incident where an auto-driver was allegedly thrashed by policemen in Mukherjee Nagar area yesterday: It's an unfortunate incident. We condemn the incident. I appeal to the LG and Home Minister to take strict action against the accused police officers.

#12:46 pm: An Army Major and a soldier have been injured in an encounter between security forces and terrorists in Anantnag. The injured troops belong to 19 Rashtriya Rifles.

#12:42 pm: CM Yogi Adityanath has directed for an immediate inquiry in the incident where 4 youth escaped from a juvenile home in Meerut yesterday. The caretaker and another employee of the juvenile home have been suspended.

#12:17 pm: Madhya Pradesh Chief Minister Kamal Nath and his son Nakul Nath arrive at the Parliament. Nakul Nath has been elected as MP from Chhindwara.

#12:01 pm: Doctors at King George's Medical University (KGMU) in Lucknow are on strike in wake of violence against against doctors in West Bengal. 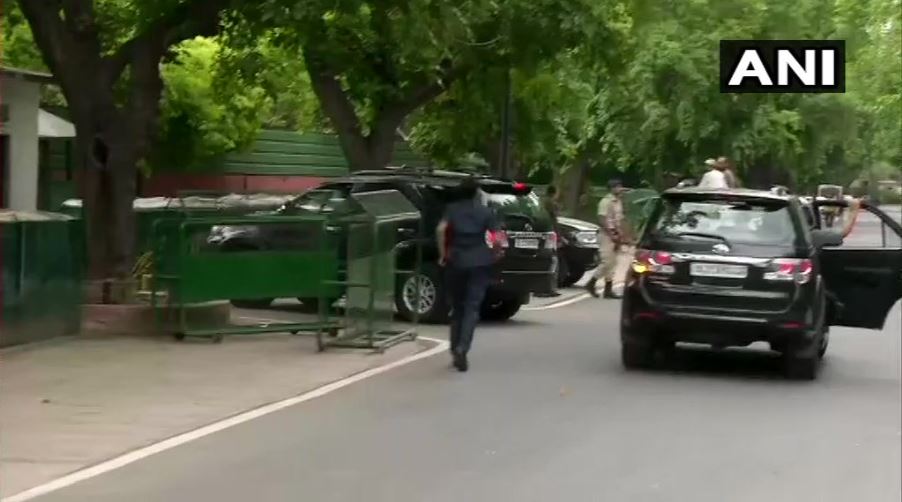 #11:55 am: Delhi's Saket Court grants bail to Monty Chadha (son of late liquor baron Ponty Chadha), in connection with a cheating case. Bail has been granted to him on two surety bail bonds of Rs. 50,000 each.

#11:53 am: Doctors at Rajendra Institute of Medical Sciences (RIMS), Ranchi, Jharkhand, hold protest against violence against doctors in West Bengal.

#11:49 am: Doctors continue to hold protest at All India Institutes of Medical Sciences, Bhubaneswar in the wake of violence against doctors in West Bengal.

#11:36 am: Tejasvi Surya, BJP MP at Parliament: It's a great institution which has shaped country's past, present and future. I'm entering it with lot of gratitude for people who've elected me and also with sense of idealism to ensure Bharat Mata reaches pinnacle of glory which it's destined to do.

#11:20 am: Supreme Court once again declines to give an urgent hearing to advocate ML Sharma’s PIL against Lok Sabha elections being held via EVMs. The Court says, 'the matter will be listed in due course after vacation'.

#11:18 am: Doctors on strike at Sir Sunderlal Hospital in Banaras Hindu University in the wake of violence against doctors in West Bengal.

#11:17 am: Doctors at Assam's Guwahati Medical College hold protest against violence against doctors in West Bengal.

#10:54 am: Supreme Court to hear tomorrow the petition seeking safety and security to government doctors across the country.

Supreme Court to hear tomorrow the petition seeking safety and security to government doctors across the country. pic.twitter.com/GJaLnqVv7o

#10:48 am: Prime Minister Narendra Modi at the Parliament: Today, a new session is starting, there are new hopes and dreams with the beginning of this session. Since independence, this Lok Sabha elections saw highest number of women voters and women MPs. Click Here

#10:34 am: BJP MP Virendra Kumar takes oath as the Protem Speaker of the 17th Lok Sabha, at Rashtrapati Bhawan, Delhi.

#10:23 am: Thawar Chand Gehlot, leader of BJP in Rajya Sabha ahead of parliament session of 17th Lok Sabha today: I would request ruling party as well as opposition parties that any problem can be resolved through discussions. So, during the session, parties should make an effort to find solutions.

#10:10 am: One BSF jawan injured in ceasefire violation by Pakistan in the Krishna Ghati sector of Jammu and Kashmir's Poonch district.

#10:07 am: Resident Doctors' Association of All India Institute of Medical Sciences (AIIMS), Delhi holds protest march against violence against doctors in West Bengal.

#10:00 am: A 23-year-old man was beaten to death by a shopkeeper and his neighbors over theft allegation in Delhi's Prem Nagar on 15 June. Case registered, police have arrested the main accused.

#09:56 am: Doctors on strike at Jaipuria Hospital in Jaipur; Indian Medical Association (IMA) today has called for a nationwide strike of doctors in the wake of violence against doctors in West Bengal.

#09:49 am: More than 1500 people participated in the celebrations organised by the Indian Embassy ahead of the 5th International Day of Yoga, at Washington Monument in Washington, DC, yesterday.

#09:14 am: As per mandate, ruling party and opposition hold a role to play for the country. PM has guided us to work together for nation. We all are making the efforts to achieve the same: Union Parliamentary Affairs Minister Pralhad Joshi ahead of Parliament Budget Session today.

#09:02 am: Death toll due to Acute Encephalitis Syndrome (AES) in Bihar's Muzaffarpur rises to 96.

#08:59 am: Indian Medical Association today has called for a nationwide strike of doctors in the wake of violence against doctors in West Bengal; Doctors at Sir Sayajirao General Hospital in Vadodara, Gujarat, hold protest outside Out Patient Department.

Gujarat: Indian Medical Association today has called for a nationwide strike of doctors in the wake of violence against doctors in West Bengal; Doctors at Sir Sayajirao General Hospital in Vadodara hold protest outside Out Patient Department pic.twitter.com/Ya6NS3CE3x

#08:34 am: 12 people were killed after terror groups attacked a village in the Syrian province of Aleppo, through mortal shelling.

#08:23 am: Fire broke out in Attur layout of Yelahanka area of Karnataka's Bengaluru last night. No casualties reported.

#08:13 am: Jammu and Kashmir: Exchange of fire underway between security forces and terrorists in Anantnag. Area is under cordon.

#08:09 am: Central Railway CPRO: There was signal issue on downline before Kalyan station (between Thakurli and Kalyan). A local train was held up and slow services were diverted on fast downline. Issue rectified. Special services were run from Dombivli. Services expected to be normal soon.

#08:07 am: Joint  Secretary to Karnataka Government: Alok Kumar, IPS, Inspector General of Police and Additional Commissioner of Police, Crime Bengaluru City is promoted to officiate in the grade of ADGP, with immediate effect.