Hello and welcome to Monday’s live blog. From politics to sports to entertainment, the Internet is buzzing with the breaking news and headlines from across the globe. While tension has escalated between India and Pakistan with the former scrapping the special status of Jammu and Kashmir, former finance minister Arun Jaitley, who was admitted to AIIMS, Delhi on August 9, is still on life support and said to be "critical". Here in this segment, News Nation brings you live news from all corners of the world. The latest stories will appear in our live blog below - so keep scrolling down.

4.30 pm: Enforcement Directorate (ED) attaches under Prevention of Money Laundering Act (PMLA), 13 immovable properties consisting of agricultural lands and residential flats at Andhra Pradesh and Telangana worth, 2.42 crores of Ganne Srinivasa Rao and others in a bank-fraud case.

4.00 pm: Chief Minister of Maharashtra, Devendra Fadnavis: I will request Nirmala Sitharman ji for extension in due date for filling income tax and GST returns.

3.30 pm: PM Modi would receive the Order of Zayed, the highest civil decoration of the UAE which was conferred earlier in April 2019 in recognition of leadership of Prime Minister Modi for giving a big boost to bilateral relations between the two countries.

3.15 pm: Ministry of External Affairs: Prime Minister Narendra Modi will be on bilateral visits to France, UAE, and Bahrain, he will also attend the G7 summit in Biarritz, France from 22nd to 26th August.

02:48 pm: Members of All Indian Cine Workers Association (AICWA) protest against singer Mika Singh in Mumbai for performing in Pakistan.

02:19 pm: ED has summoned P Chidambaram in connection to a case related to the Airbus purchase deal on August 23.

01:30 pm: Dravida Munnetra Kazhagam (DMK) to hold a protest on 22 August at Jantar Mantar in Delhi against revocation of Article 370.

11:46 am: Heavy to very heavy rainfall likely to occur at isolated places in Uttarakhand's Kumaun region during the next 24 hours.

11:44 am: Jodhpur court adjourned hearing in Blackbuck poaching case to September 16 on a plea of Rajasthan Government against acquittal of Saif Ali Khan, Tabbu, Sonali Bendre, Neelam and Dushyant Singh.

11:13 am: Supreme Court refuses to quash the charges against journalist Tarun Tejpal in the sexual assault case registered by his former junior colleague in 2013.

10:30 am: Traffic movement stopped at Bhuntar-Manikaran road near Sarsadi in Himachal's Kullu after the road caved in following a landslide.

10:19 am: A portion of a footbridge over Sutlej river in Chaba area of Shimla collapsed yesterday after the water level in the river increased due to heavy rainfall in the region. The bridge provided connectivity to Shakra, Baaladi, Bindla and Jedvi villages.

10:10 am: 17 people have died in the cloud burst in Mori tehsil of Uttarkashi.

10:04 am: Jammu and Kashmir: Schools re-open in Rajouri district today.

09:57 am: Electricity production resumed last night in Nathpa Jhakri Hydroelectric Station of 1500 MW capacity and 412 MW Rampur Hydro Power Station in Shimla. Operation was suspended yesterday due to rise in silt in the Satluj river.

09:43 am: Delhi Government has called for an emergency meeting of concerned officials in wake of the rising water level in Yamuna river. Delhi CM Arvind Kejriwal will chair the meeting.

09:30 am: Normal life affected in Himachal Pradesh's Hamirpur due to heavy rainfall in the area.

09:18 am: Water level of Yamuna River recorded at 204.70 meters today (the warning level is at 204.50 meters), after more than 8 lakh cusecs of water released from Hathni Kund barrage in Delhi.

08:50 am: Emergency Wing at Dehradun's Doon Hospital prepared to take-up patients being brought from Mori tehsil of Uttarkashi.

08:23 am: Uttarakhand: Two choppers have taken off for Arakot of Mori in Uttarkashi with communication equipment and ropes for rescue operations following cloud burst. Three medical teams have also reached the spot. 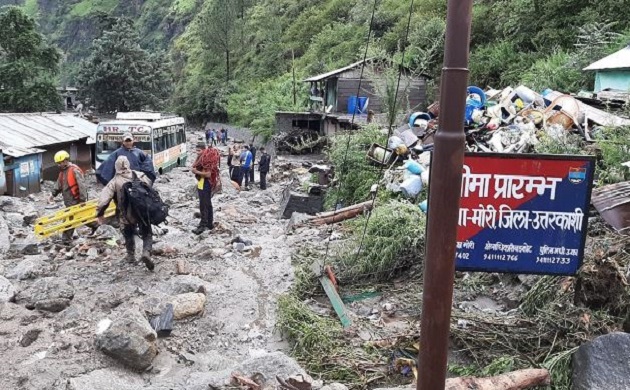 07:20 am: 10 dead and 20 injured after a bus collided with a canter truck near Nimgul village in Maharashtra's Dhule late last night.

Maharashtra: 10 dead and 20 injured after a bus collided with a canter truck near Nimgul village in Dhule, late last night. pic.twitter.com/7i49q3z3pT

06:41 am: I am not scared of being arrested.I'll surrender in next 3-4 days. I haven't been to that house in last 14 yrs so there's no question of keeping AK-47 there, says Independent MLA from Mokama, Anant Singh, who went missing following recovery of an AK-47 from his residence on August 16.

06:30 am: A sigh of relief for Hong Kong as weekend protest ends without violence.