Hello and welcome to Friday's live blog. From politics to sports to entertainment, the Internet is buzzing with the breaking news and headlines from across the globe. While the Supreme Court of India is scheduled to hear a clutch of important petitions, including the Unnao rape victim's accident case, the Ayodhya land dispute case and Liquor tycoon Vijay Mallya's money laundering case, Pakistan is likely to grant consular access to Indian national Kulbhushan Yadav, who has been in a death row since 2017. Here in this segment, News Nation brings you live news from all corners of the world. The latest stories will appear in our live blog below - so keep scrolling down.

8.50 pm: India and Guinea signed three MoUs — cooperation in the field of traditional system of medicine and homeopathy; renewable energy; and for participation in the e-VidyaBharati and e-AarogyaBharat (e-VBAB) Network Project.

8.45 pm: Supreme Court on Friday sought a response from Centre and state governments on a plea seeking direction to formulate and implement public health programme for the prevention and reduction of suicides in states.

8.30 pm: Reserve Bank of India has imposed monetary penalty on Allahabad Bank, Bank of Baroda, Bank of India, Bank of Maharashtra, Indian Overseas Bank, Oriental Bank of Commerce and Union Bank of India for non-compliance with certain provisions of directions issued by RBI.

8.15 pm: Nivedita Kukreti, SSP Dehradun, Uttarakhand: Yesterday, we received a complaint that a woman was given triple talaq by her husband on 31st July. We have registered a case under relevant sections, further investigation to be conducted.

8.00 pm: Divisional Commissioner Kashmir, Baseer Ahmed Khan: No schools in the district have been closed. I appeal to people to not believe any rumours. People should contact their concerned deputy commissioners for reliable information

7.30 pm: Gulam Nabu Azad,Congress:J&K Policy Planning Group of Congress met today under chairmanship of Dr Manmohan Singh.Deep concern was expressed at continuous reports emanating from both Home Ministry J&K govt which were creating an atmosphere of panic&apprehension about intentions of the Governmeny of India.

7.00 pm: Bihar: Houses have been submerged in floodwater in Samastipur. Locals say,"we are facing lots of problems due to flooding. We don't have food and drinking water. We are yet to receive any help from the govt."

6.30 pm: Raebareli: Central Bureau of Investigation (CBI) team conducts investigation at the site where Unnao rape survivor met with an accident on July 28.

6.15 pm: Ravinder Raina, BJP J&K President: Amarnath Yatra will continue till August 15 as per schedule. Strong security measures have already been taken & there is no atmosphere of fear. All yatris can visit the holy shrine but advisory issued by the home department should be followed.

Haryana: Wall of a building collapsed in Udyog Vihar, Gurugram due to heavy rainfall; several cars have been damaged. pic.twitter.com/HOwkD1lzAk

5.15 pm: Finance Minister, Nirmala Sitharaman to meet heads of all public and private sector banks on 5th August, to review matters relating to growth of credit in various important sectors of the economy.

5.00 pm: Patna: A man was thrashed by a mob on suspicion of being a child lifter. Police says, "soon after we received the info we rushed to the spot and rescued the man. He is admitted to hospital. Further investigation underway."

3.15 pm: Raebareli: Central Bureau of Investigation (CBI) team reaches the site where Unnao rape survivor met with an accident on July 28. In the accident the victim, her lawyer sustained injuries while her two aunts died on the spot.

#02:43 pm: Train movements affected on Kalka-Shimla heritage railway line near Dharampur in Himachal Pradesh's Solan district, due to landslide in the area.

Himachal Pradesh: Movement of trains affected on Kalka-Shimla heritage railway line near Dharampur in Solan district, due to landslide in the area. pic.twitter.com/Z8Vj8NYisn

#01:12 pm: One died after a wall collapsed in a housing society in Sakinaka, Mumbai today.

#01:53 pm: Malegaon blasts case: Special National Investigation Agency (NIA) Court adjourned the hearing till 5th Aug on NIA's application seeking in-camera proceeding of the trial. The court directed the NIA lawyer to give copies of the application to all defence lawyers today.

#01:45 pm: Pakistan has been asked yesterday to provide unimpeded consular access to Kulbhushan Jadhav, in an environment free from the fear of intimidation and reprisal, in the light of the orders of the ICJ. Their response is now awaited.

Home Minister Amit Shah in Rajya Sabha: Chidambaram ji asked why to name an individual as a terrorist when the organization they are affiliated to is already banned. It is because we ban one org, another one comes up by same individuals. Till when will we keep banning orgs? #UAPA pic.twitter.com/0inu9k8Zzx

#12:00 pm: The Indian Air Force flying operations in Jammu and Kashmir are part of “normal activity”. Mirage 2000 fighter aircraft are also operating from airbases inside the state.

#11:54 am: Malegaon blasts case: Bombay High Court adjourned the hearing on application by Lt Col Prasad Purohit, for 2 weeks. Purohit had sought from NIA, non truncated copies of the statements of the witnesses.

#11:45 am: Also, Supreme Court has deferred shifting of survivor and her lawyer from King George Medical College at Lucknow as relatives inform the court that as of now their treatment could continue in the Lucknow hospital.

#11:36 am: Unnao rape survivor accident case: Solicitor General says 'family of victim was to inform about shifting her and they said victim is completely unconscious and let her remain in the hospital in Lucknow. Lawyer for family says she can be shifted once she is stable'.

#11:32 am: Supreme Court declines to entertain PIL seeking direction for compulsory voting by every eligible citizen of the country in general elections. Court dismisses the plea after Attorney General KK Venugopal tells the Court that petitioner can approach the Election Commission.

#11:30 am: A complaint has been registered against DMK leader MK Stalin and four others for holding a poll meeting at a hall in Vellore yesterday without prior permission for the same. The authorities have also sealed the hall where the meeting was held.

#11:27 am: Central Reserve Police Force(CRPF) personnel have reached residence of Unnao rape survivor in Makhi village. Supreme Court had yesterday directed that security be provided to the survivor's family.

#11:18 am: MPs of Left parties protest in Parliament against amendments in labour laws and against 'corporate appeasement'.

#11:13 am: Supreme Court adjourns to 13 August, the petition filed by the fugitive economic offender, Vijay Mallya, challenging the confiscation of properties belonging to the companies owned by him and his family members, by government agencies.

#11:12 am: I met doctors and cleared their misunderstandings over some provisions of bill. Have explained to them that this bill is in nation's interest and in interest of doctors and patients. Appealed to them to end their protest, says Health Minister Dr Harsh Vardhan.

Health Minister Dr. Harsh Vardhan: I met doctors and cleared their misunderstandings over some provisions of bill.Have explained to them that this bill is in nation's interest&in interest of doctors and patients.Appealed to them to end their protest #NationalMedicalCommissionBill pic.twitter.com/xf867ZzBoV

#11:10 am: Solicitor General Tushar Mehta seeks an extension of time, says, a final decision on the appointment of Justice Akil Kureshi will be taken once Parliament session is over.

#11:09 am: Supreme Court asks Centre to take a decision on SC collegium’s May 10 recommendation to appoint Bombay High Court’s Justice Akil Kureshi as Chief Justice of Madhya Pradesh HC and also asks Centre to place the decision taken by it before the Court.

#11:01 am: Mangaluru Commissioner of Police Sandeep Patil has been transferred. Dr Subramanyeshara Rao to be the new Commissioner.

#10:45 am: BJP MPs from West Bengal held a protest in front of Mahatma Gandhi's statue in Parliament over law and order situation in the state.

#10:25 am: Indian Meteorological Department: With the development of low pressure area over Bay, this Saturday night and Sunday, Mumbai is very likely to get intense heavy rainfalls. Warnings are issued including for west coast.

#10:20 am: Suspended Kerala DGP, Jacob Thomas in Thrissur: Did we reach a situation where we can't hail Lord Ram? If our minds have reached a state where we cannot hail Ram, then we must think if we have become evil. Time has come for us to chant 'Jai Shree Ram' with more might.

#10:09 am: Congress Chief Whip in Lok Sabha K Suresh has given an adjournment motion notice on Unnao rape case.

#09:04 am: For the rapid induction of CRPF and other paramilitary troops into the Kashmir valley, Government has pressed Indian Air Force aircraft including the C-17 heavy lift plane into service.

#08:43 am: Trinamool Congress’s three-line whip for all its Rajya Sabha MPs asking them to be present in the house, continues for the 5th straight day.

#08:05 am: People queue up to buy milk in flood hit Gujarat's Vadodara.

#07:59 am: A vehicle of 55 Rashtriya Rifle (RR) was targeted by an Improvised Explosive Device (IED) in South Kashmir’s Shopian district earlier today. No injury or casualty reported in the incident, however the vehicle suffered minor damage.

#07:55 am: BJP Odisha MLA Bishnu Sethi on his remark 'Women who are given triple talaq are forced into prostitution': There is nothing wrong in what I said, even in Pakistan and Bangladesh they don't have triple talaq. Victims are our daughters too. There are many reports which point towards this.

#07:42 am: If I can.. if they wanted me to, I would certainly intervene, Trump says on Kashmir issue. Read Full Story Here

#07:40 am: US President Donald Trump on India's rejection to US's mediation offer for Kashmir: It is really up to PM Modi. And I met with Prime Minister Khan;I got along great. I think they’re a fantastic people,Khan and Modi.I mean I would imagine they can get along very well. 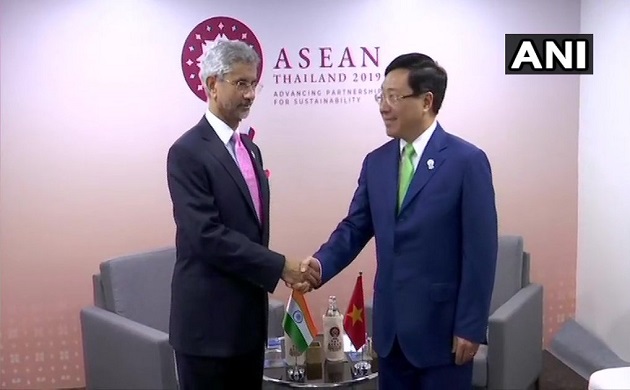 #07:26 am: EAM Subrahmanyam Jaishankar to meet United States Secretary of State Michael Pompeo in Bangkok later today. Jaishankar is in the Thai capital to attend a series of meetings including the ASEAN-India Ministerial Meeting.

EAM Subrahmanyam Jaishankar to meet United States Secretary of State Michael Pompeo in Bangkok later today. Jaishankar is in the Thai capital to attend a series of meetings including the ASEAN-India Ministerial Meeting. (file pic) pic.twitter.com/k1SeMXECPC

#07:20 am: A woman in Hapur alleges her husband gave her 'triple talaq' and threw her out of the home with their 6 children after she asked money for house expenses. SP Yashveer Singh says, "we have received a complaint. Action will be taken".

#07:16 am: US preparing to withdraw over 5K troops from Afghanistan: Report. Read Here

#07:08 am: It's time China change things around, says US President Donald Trump.

#06:45 am: Multi-purpose sports complex being constructed by Jammu and Kashmir Sports Council in Ramnagar at a cost of Rs 1.34 crores, to provide a platform to the youth in the district.

#06:35 am: Exchange of fire reported between terrorists and security forces in Pandoshan village of Jammu and Kashmir's Shopian. Click Here For Details

#06:30 am: Hyderabad Police rescued 847 children from child labour in the year 2019, under "Operation Smile". 17 teams each headed by a Sub-Inspector were constituted for the mission.