Hello and welcome to Saturday's live blog. From politics to sports to entertainment, the Internet is buzzing with the breaking news and headlines from across the globe. While people across India get into celebratory mood with the festivity of Ganesh Chaturthi, tensions continue to escalate with neighbouring Pakistan over the abrogation of Article 370 early this month. Here in this segment, News Nation brings you live news from all corners of the world. The latest stories will appear in our live blog below - so keep scrolling down.

7.15 pm: Jharkhand Chief Minister Raghubar Das at 'Shakti Kendra Sammelan' in Daltonganj: An ordinary worker can also reach heights, this is only possible in BJP, unlike other parties. BJP is a party where even a tea-seller's son can become the prime minister.

7 pm: Delhi Police have arrested the husband of a 27-year-old woman whose body was found in a gunny bag in Sagarpur on Aug 6. Police say, 'The man was trying to pressurise the woman into prostitution, he strangulated the woman to death over her persistent denial.'

6.45 pm: Ingit Pratap Singh, Add'l DCP, South-West Delhi: Police have arrested a man in connection with ATM fraud, the man was a Junior Commissioned Officer in the Army & was dismissed for theft. 32 ATM cards have been recovered from the man, he had been involved in 16 cases earlier also.

6.15 pm: At least 35 Taliban fighters, including a key commander of the group, were killed in Afghan forces operations in Kunduz, the National Directorate of Security said in a statement.

6 pm: Assam Minister Himanta Biswa Sarma on NRC Assam: Assam govt has an inherent power to pursue anybody, if govt feels that he is a foreigner, so that ongoing exercise will continue.

5.30 pm: Central Bureau of Investigation (CBI) has registered a case, on the request of Karnataka govt, and further notification of Govt of India related to alleged illegal telephone interception of several ruling party and opposition leaders and their relatives, and govt officers.

4.50 pm: Delhi police special cell has arrested a 32-year-old man who had murdered a sex worker on 20 August. The man, who is married and has three children, wanted to marry the woman and had been forcing her to quit her work; she had refused his proposal.

4.20 pm: National Working President of Bharatiya Janata Party, JP Nadda at 'Shakti Kendra Sammelan' in Daltonganj: Let me also tell you one thing, our membership has improved the most in West Bengal, and Jammu and Kashmir.

03:00 pm: Odisha: Residents of Rajpur village in Jharsuguda district started a 'rail roko' agitation today, at the unmanned railway barrier gate, demanding a Rail Over Bridge. Villagers say, "Our agitation will continue until the govt or administration gives us an assurance in writing".

01:30 pm: Brother of Sikh girl who was allegedly abducted and converted to Islam in Pakistan: Our sister has not been returned to us till now, these reports are wrong, neither arrests made yet. I appeal to PM Imran Khan, Army Chief and Punjab Governor to ensure justice to us.

01:00 pm: GS Rajput, Madhya Pradesh Minister: Jyotiraditya Scindia ji is in race to be the State President, his stature is so tall that he will not try very hard for this post. It is not only my wish but the whole state will be very happy if Scindia ji assumes charge of the State Congress.

12:40 pm: Abdul Khaleque, Assam Congress MP on final NRC List: I congratulate NRC State Coordinator and the Supreme Court for publishing the final list. However, I'm not fully satisfied as many names of genuine Indian citizens have been left out. I appeal to govt to review formation of Foreigners Tribunal.

11:35 am: Senior Congress leader DK Shivakumar arrives at Enforcement Directorate office in Delhi to appear before the agency in connection with a money laundering case.

Senior Congress leader DK Shivakumar arrives at Enforcement Directorate office in Delhi to appear before the agency in connection with a money laundering case. pic.twitter.com/NScYozxkiI

11:30 am: 575 youth from J-K joined the Jammu and Kashmir Light Infantry Regimental Centre during the passing out parade in Srinagar today.

11:20 am: Over 20 Feared Dead, 80 Trapped After Explosions At Chemical Factory In Maharashtra's Dhule - Read Here

11:10 am: Congress meeting to be held shortly at 10 Janpath on Assam National Register of Citizens (NRC) final list issue.

11:05 am: National Register of Citizens (NRC) is needed in Delhi as situation is becoming dangerous. Illegal immigrants who have settled here are the most dangerous, we will implement NRC here as well: Delhi BJP chief Manoj Tiwari.

10:55 am: Two people were injured after a tree fell on the road at Sane Guruji Marg in Mumbai earlier today.

10:45 am: Narayan Rane is close to BJP, only thing that has to be decided is whether his party will merge with us or not. Final decision will be taken after discussions with Shiv Sena, says Maharashtra Chief Minister Devendra Fadnavis.

10:35 am: Final list of National Register of Citizens (NRC) has been published in Assam. Here Is How To Check

09:50 am: Water-logging in parts of Guwahati following heavy rainfall in the region.

Assam: Water-logging in parts of Guwahati following heavy rainfall in the region. pic.twitter.com/77bAF6mk2Y

09:35 am: Anti human-trafficking bureau of Nepal Police busted a bride trafficking ring and arrested 10 people including 4 Chinese nationals, they were involved in trafficking of girls and women from Nepal to China as brides.

09:00 am: Shuttler PV Sindhu and her family meets Vice President M Venkaiah Naidu at his residence in Hyderabad. 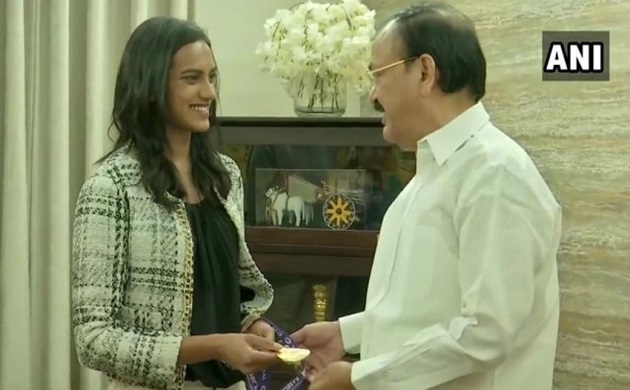 08:50 am: Heavy rain lashes parts of Barpeta city in Assam.

08:15 am: Fire breaks out in a cloth factory in Pandesara, Surat. 18 fire tenders at the spot. No injuries reported.

08:00 am: The final National Register of Citizens (NRC) list in Assam to be published today.

07:45 am: Balochistan activists gathered outside British Prime Minister's House at 10 Downing Street yesterday to seek his immediate intervention for release of thousands of Baloch political activists languishing in detention centres in Pakistan.

07:30 am: Sikh girl who was allegedly abducted and converted to Islam in Pakistan, has been sent to her parents. Punjab's Nankana Sahib police have arrested eight persons in the case.

07:15 am: Youth and children participate in sports, under the scheme of Khelo India, national programme for development of sports in Jammu and Kashmir's Poonch.

07:00 am: Ahead of Ganesh Chaturthi, eco-friendly idols of Lord Ganesha being sold in the markets across Hyderabad.

Hyderabad: Eco-friendly idols of Lord Ganesha being sold in the markets across the city. #GaneshChaturthi pic.twitter.com/o5EB0nyaOX