Hello and welcome to Saturday's live blog. From politics to sports to entertainment, the Internet is buzzing with the breaking news and headlines from across the globe. While Prime Minister Narendra Modi is all set to visit his parliamentary constituency Varanasi to launch the BJP's countrywide membership drive, the World Cup fever sweeps the nation, where cricket rules the hearts of millions. Here in this segment, News Nation brings you live news from all corners of the world. The latest stories will appear in our live blog below - so keep scrolling down.

#10:48 pm: A hideout of NSCN (IM) was busted today by Indian Army at Kekru Naga village in Manipur. An operation was launched on the night July 5 and is still underway. An active cadre of the outfit apprehended. Arms and ammunition recovered.

Rajasthan: Lok Sabha Speaker Om Prakash Birla welcomed by his supporters in Jaipur. He is on his way to his parliamentary constituency Kota pic.twitter.com/BjIBtiwmo6

#9:45 pm: An earthquake of magnitude 3.1 on the richter scale hit Uttarkashi, Uttarakhand, at 9 pm today.

#9:00 pm: One of the 2 men who drowned at Marine Drive due to high tide was rescued but was declared brought dead at the hospital. Search operation for the other continues.

#9:00 pm: The National investigation Agency (NIA) takes over the probe of the May 1 naxal attack, in which 15 policemen and a civilian lost their lives in a blast in Gadchiroli district. 8 accused have been arrested in the case till now.

#8:00 pm: It's a big achievement, I want to congratulate the people of Rajasthan, and entire country: Defence Minister Rajnath Singh on Jaipur declared a World Heritage site by UNESCO

#7:42 pm: Many of the MLAs who want to leave Congress have been associated with the party for a long time. I've faith that they'll stay with us & support the party. I'm going to Bengaluru. I'll make further comments after looking at the ground situation there: Mallikarjun Kharge

#06:45 pm: Congress workers protest outside the Congress office against the MLAs who submitted their resignations to the Assembly Speaker, today.

#06:05 pm: I'm not going to react anything, I have not spoken anything to anybody. I'm only holding my party workers meeting just to prepare ourselves for  for the corporation polls: Former PM HD Deve Gowda.

#05:05 pm: We've resigned voluntarily. We are not influenced by any "Operation Kamala: H Vishwanath

#04:55 pm: In Congress-JD (S) coalition government in Karnataka, 14 MLAs have resigned against the Government till now, We also met the Governor. We wrote to speaker to accept our resignation. Coalition Government did not meet the expectations of the people of Karnataka: H Vishwanath

#04:30 pm: People are watching the way DK Shivakumar is behaving. He tore resignation letters of some of the MLAs inside the Speaker's office, who had gone* to resign, it is condemnable: BS Yeddyurappa

#04:05 pm: BS Yeddyurappa will be the Chief Minister if a new Government is formed: DV Sadananda Gowda.

#04:00 pm: They thought it's high time to come out of that party and resigned from legislators post as they felt that continuing as MLAs was not good in the larger interest of their constituency and the state: Sadananda Gowda.

#03:57 pm: Hearing in defamation case against Rahul Gandhi for blaming RSS for assassination of Mahatma Gandhi has been adjourned for October 19 by a Bhiwandi court in Maharashtra.

#02:39 pm: Rahul Gandhi has been granted bail by Patna Court in connection with a defamation case filed by Bihar Deputy Chief Minister Sushil Modi over Gandhi's remark 'why all thieves have Modi surname?

#02:24 pm: A case has been registered against BJP MP and Chairman of National Commission for Scheduled Castes Ram Shankar Katheria, whose security personnel thrashed toll plaza employees and fire in the air after an argument: SSP Agra, Bablu Kumar.

#01:03 pm: DMK announces DM Kathir Anand as its candidate for Vellore Lok Sabha constituency (Tamil Nadu) election, scheduled to be held on 5 August. EC had earlier cancelled election for the constituency in wake of seizures of large amounts of unaccounted cash.

#12:46 pm: Rajasthan Chief Minister Ashok Gehlot on 'Rajasthan govt increases tax on petrol and diesel by 4% each': For winning elections, previous govt had reduced VAT by 4%. We have corrected the mistake committed by them. We have done nothing. Centre also hiked it many times.

Karnataka: Congress workers protest in Bengaluru against the hike in fuel prices & other issues. pic.twitter.com/ez8Jr5e0T4

#12:01 pm: My security did not attack toll plaza employees, they first attacked my people. Toll employees did not know other cars were part of my convoy, they thought some other car is slipping through behind mine. My security guard only fired in self defence, says BJP MP RS Katheria.

#11:58 am: All India Anna Dravida Munnetra Kazhagam (AIADMK) announces A Mohammad John and N Chandrasekharan as its Rajya Sabha candidates.

#11:56 am: BJP Parliamentary Party Meeting to be held on July 9 in Parliament.

#11:53 am: Four Naxals killed in an encounter with Police Special Task Force (STF) in Dhamtari Chhattisgarh. All 4 bodies and seven weapons recovered.

#11:47 am: BJP has issued a three-line whip to its Rajya Sabha MPs to be present in the House on 8th and 9th July.

#11:45 am: Former Union Minister MJ Akbar during his cross-examination said in Court that it’s wrong to suggest that the articles and tweets of Priya Ramani were meant to raise awareness regarding the issue of sexual harassment at the workplace.

#11:41 am: Delhi court posts for July 15 and 17 for cross-examination of Former Union Minister MJ Akbar’s witness.

#11:38 am: 13 BJP workers were arrested during a clash with Trinamool Congress workers outside Asansol Municipal Corporation office over 'cut money' issue yesterday.

#11:25 am: 84th birthday of the Dalai Lama being celebrated in Dharamshala, Himachal Pradesh.

#10:47 am: Two injured in a clash allegedly between Trinamool Congress and BJP supporters in Burdwan, West Bengal, yesterday. Injured have been shifted to Burdwan Medical College and Hospital.

#10:39 am: Delhi Chief Minister Arvind Kejriwal reaches Safdarjung Hospital, announces Rs 10 lakh compensation to the family of the 6 year old girl who was sexually assaulted in Dwarka. The AAP leader said, "I met the doctors, she is stable now and out of danger. We will also provide an advocate to the family".

#10:11 am: One dead and five injured in a collision between a truck and a car on Jogeshwari flyover bridge opposite Trauma Care Hospital in Jogeshwari (East), Maharashtra, earlier today.

#Mumbai | One dead and five injured in a collision between a truck & a car on Jogeshwari flyover bridge opposite Trauma Care Hospital in Jogeshwari (East), earlier today, reports ANI. #Maharashtra

#10:05 am: Watch: Security Personnel of BJP MP and Chairman of National Commission for Scheduled Castes Ram Shankar Katheria, thrash toll plaza employees and fire in the air after an argument. Katheria was also present at the spot.

#WATCH Agra: Security Personnel of BJP MP and Chairman of National Commission for Scheduled Castes Ram Shankar Katheria, thrash toll plaza employees and fire in the air after an argument. Katheria was also present at the spot pic.twitter.com/W8g5Wo4bN6

#09:43 am: Bhilar, a village of books, in Maharashtra's Satara has a library set up in almost all the houses of the village. Rahul, one of the visitors, says,"It's an amazing project by Maharashtra Govt. Whenever I get time, I come here&go across books kept at 30 places across the village".

#08:54 am: Rainfall leads to water-logging in Bhiwandi in Thane district. 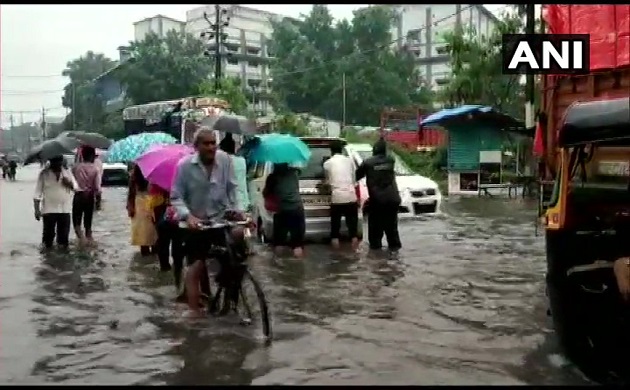 #08:52 am: Part of tree fell on Mulund station's cover over platform (COP) in Mumbai and got entangled with Pantograph of a DN slow local train. The tree branches were later removed and services resumed.

#08:50 am: Lasith Malinga, Sri Lankan Cricketer, on India vs Sri Lanka, at Leeds in England today: Virat Kohli has skilled players. They are a successful team. They are good enough to beat any other team in this competition. Also, I don't think anyone can beat MS Dhoni.

#08:37 am: Tej Pratap Yadav at RJD foundation day programme in Patna: Please get aside and let women come forward. If women have to progress, they have to be in front. Wherever my program is held, I make women sit in the front, like my father used to do.

#WATCH Tej Pratap Yadav at RJD foundation day programme in Patna: Please get aside & let women come forward. If women have to progress, they have to be in front. Wherever my program is held, I make women sit in the front, like my father used to do. (05.07.2019) pic.twitter.com/JW7t28XDyu

#08:23 am: Prime Minister Narendra Modi to launch BJP's membership drive from Varanasi today. He will also launch a tree plantation drive in the city.

#08:15 am: Rahul Gandhi to appear today in Patna Court in connection with a defamation case filed by Bihar Deputy Chief Minister Sushil Modi over Gandhi's remark 'why all thieves have Modi surname?