Hello and welcome to Monday's live blog. From politics to sports to entertainment, the Internet is buzzing with the breaking news and headlines from across the globe. While the JD(S)-Congress government in Karnataka plunged into a crisis, with 14 MLAs of the alliance submitting their resignation to the Speaker, the World Cup fever sweeps the nation, where cricket rules the hearts of millions. Here in this segment, News Nation brings you live news from all corners of the world. The latest stories will appear in our live blog below - so keep scrolling down.

Washington, D.C, United States of America: Heavy rains swamped the national capital on Monday morning, causing road and rail delays and knocking out power. A portion of the press area in the White House was also affected. pic.twitter.com/ZFQbLXHZwz

#10:45 pm: Fire breaks out at a shop in Munirka furniture market, 12 fire tenders rushed to the spot; more details awaited.

#9:45 pm: IAF Chief BS Dhanoa to embark on a bilateral goodwill visit to Russia from 9-12 July. He will visit various operational & training units as well as fly a sortie in the Russian Trainer Aircraft YAK-130. He'll interact with senior functionaries of Russian Armed Forces.

#8:56 pm: A student of Shri Ram Krishan Sr Sec School in Sonipat's Bhigan, attacked his teacher with a sharp object after she allegedly scolded him for not doing homework. Police say, "She was immediately taken to hospital & has been referred to PGI Khanpur. We will file an FIR."

#8:00 pm: I'm hurt by the way Congress party treated me, I'll resign from my MLA post and join BJP: Roshan Baig to ANI.

#7:20 pm: Rebel Congress-JDS Karnataka MLAs to be shifted to Goa from Mumbai hotel

#6:10 pm: People like Bill Gates & Thomas Friedman are appreciating Aadhar. We are not touching the architecture of Aadhaar, we are only changing the concerned law: Union Minister RS Prasad on Aadhaar and Other Laws (Amendment) Bill, 2019 in Rajya Sabha.

#5:55 pm: If such a situation arises, a decision will be reached after consulting everyone. Congress follows party's Constitution strictly: Jitin Prasada, Congress on being asked 'if consensus can be reached on a non-Gandhi party president'.

#5:35 pm: When they lost the confidence, they have no moral right to conduct the business. That is why we are demanding that he (CM) resign immediately: BS Yeddyurappa.

#5:20 pm: Train movement on Mumbai-Pune line on Central Railway route affected after a boulder fell on the down line between Thakurwadi-Monkey Hill at 1515 hours. Down line and Middle line affected.

#5:10 pm: Congress-JD(S) workers stage protest on the streets of the city alleging horse trading by BJP in the state.

Bengaluru: Congress-JD(S) workers stage protest on the streets of the city alleging horse trading by BJP in the state. pic.twitter.com/MvcskNAN6r

#4:30 pm: Government has made a budget announcement&we'll interact with them. As debt manager of govt of India I'm sure govt will have internal discussion with RBI and whatever we need to discuss with govt will be done internally: RBI Governor on centre to raise part of market borrowing in external market.

#03:40 pm: A Class 9 student of Narayana School, Siliguri died, another student critically injured after a window pane broke and fell on them, earlier today. The injured student has been admitted to a local hospital; police investigation is underway.

#03:10 pm: Death count due to Acute Encephalitis Syndrome (AES) rises to 142 in Muzaffarpur.

#03:01 pm: After the Congress, all nine JD(S) ministers in Karnataka have submitted their resignations to facilitate a cabinet reshuffle.

#02:23 pm: Defence Minister Rajnath Singh in Lok Sabha: Our party has nothing to do with what is happening in Karnataka. Our party has never indulged in horse trading.

#01:58 pm: Trinamool Congress walks out of Rajya Sabha protesting against the Centre's decision of disinvestment in Public sector undertakings (PSUs).

#11:52 am: Tigress and her two cubs found dead in Chimur Forest area of Chandrapur, Maharashtra.

#11:29 am: DMK leader NR Elango has given his nomination as a party candidate for Rajya Sabha for the fourth Rajya Sabha seat from Tamil Nadu.

#11:20 am: 40 children from Telangana Minority Residential School admitted to hospital after consuming food at their hostel today. One discharged from hospital. The school in a statement says the children are in a stable condition.

#11:15 am: One civilian injured in a ceasefire violation by Pakistan in Naushera sector of Jammu and Kashmir's Rajouri.

#11:12 am: Karnataka Minister and Independent MLA Nagesh resigns from his minister post.

#11:10 am: Pained by the bus accident in Agra, Uttar Pradesh. Condolences to the families who have lost their loved ones. I pray that those injured recover fast. The state government and local administration are providing all possible assistance to the affected: PM Narendra Modi.

#11:09 am: Supreme Court today decided to hear on Friday a plea challenging the validity of the June 27 verdict of the Bombay High Court, giving its go ahead to the quota for the Maratha community in jobs and education in Maharashtra.

#10:41 am: Trinamool Congress MPs hold protest in front of Gandhi statue in Parliament over disinvestment in Public sector undertakings (PSUs). 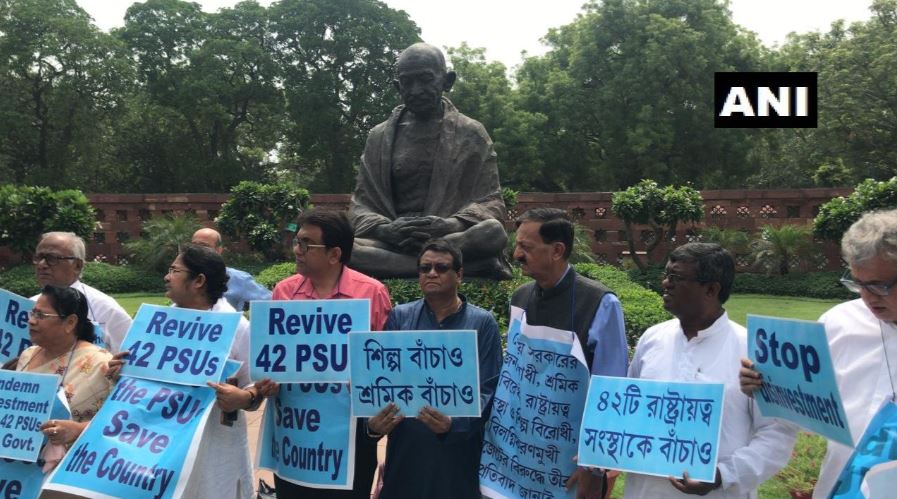 #10:30 am: Water logging and traffic jam in parts of Mumbai following heavy rainfall across Maharashtra.

#10:10 am: Doctors at Maulana Azad Medical College in Delhi have called a strike after a duty doctor in the emergency ward was assaulted allegedly by patient's relative last night. Striking doctors will soon meet the administration to demand safety at workplace.

#09:24 am: Defence Minister Rajnath Singh has taken cognizance of the road accident on Yamuna Expressway in Agra in which 29 persons have died. He spoke to District Magistrate and gave directions for proper treatment of those injured.

#09:09 am: Sindh (Pakistan) origin people in Canada hold protest in Mississauga, against forced conversion of Hindu girls in Pakistan.

#08:55 am: India yesterday carried out three successful tests of the indigenous Nag anti-tank guided missiles in Pokharan test firing ranges. The missiles were test-fired during both day and night during the trials.

#08:53 am: Watch | Kangana Ranaut has a spat with a reporter, accuses him of smear campaign, at the 'Judgementall Hai Kya' song launch event in Mumbai.

#WATCH Kangana Ranaut has a spat with a reporter, accuses him of smear campaign, at the 'Judgementall Hai Kya' song launch event in Mumbai. (07.07.2019) pic.twitter.com/sNuWduY3yg

#07:50 am: Amarnath Yatra is taking place since years. But unfortunately, the arrangements done this year are against the people of Kashmir. It's causing a lot of trouble in day-to-day lives of local people. I would like to request the Governor to intervene into the matter, says PDP chief Mehbooba Mufti. 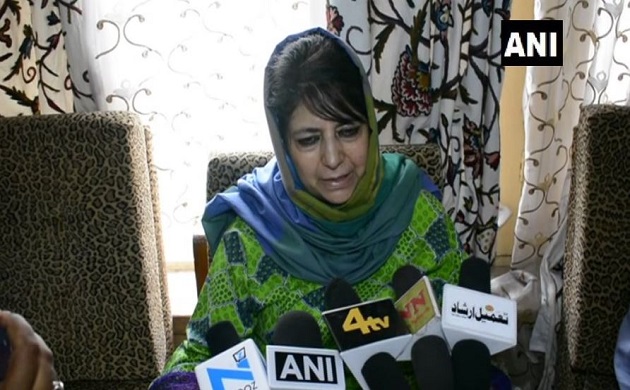 #07:44 am: Trinamool Congress MP Manish Gupta has given Zero Hour Notice in Rajya Sabha over "Centre’s proposal to link data of 3 crore students to Facebook".

#07:00 am: Amit Shah has promised to tour the state once in a month. He assured us that two Union Ministers will also tour the state every month to look into the implementation of Union Government's welfare schemes, Telangana BJP President K Laxman told media.

#06:51 am: A 9 year old girl was allegedly raped by her cousin in Tareenpur, Sitapur on July 4. Case has been registered, accused has been arrested. Further investigation underway.

#06:43 am: A woman, Gulistana, was allegedly asked to vacate her home by her landlord after she joined BJP. The incident took place in Aligarh, Uttar Pradesh.

#06:33 am: Uttar Pradesh Police to deploy around 8,000 personnel for Kanwar Yatra, scheduled to be commenced on July 17.

#06:30 am: Members of the transgender community performed at a cultural festival in Berhampore, Murshidabad, West Bengal.

#06:22 am: Watch | Several people tied with a rope and made to chant "Gau mata ki jai" in Khandwa, Madhya Pradesh on accusation of carrying cattle in their vehicles.

#WATCH Several people tied with a rope and made to chant "Gau mata ki jai" in Khandwa, Madhya Pradesh on accusation of carrying cattle in their vehicles. (7.7.19) (Note - Abusive language) pic.twitter.com/5pbRZ4hNsR