While Prime Minister Narendra Modi Is All Set To Attend The G20 Summit In Japan's Osaka Today, The World Cup Fever Sweeps The Nation, Where Cricket Rules The Hearts Of Million.

Hello and welcome to Friday's live blog. From politics to sports to entertainment, the Internet is buzzing with the breaking news and headlines from across the globe. While Prime Minister Narendra Modi is all set to attend the G20 Summit in Japan's Osaka today, the World Cup fever sweeps the nation, where cricket rules the hearts of million. Here in this segment, News Nation brings you live news from all corners of the world. The latest stories will appear in our live blog below - so keep scrolling down.

#01:45 pm: Union Minister of Railways, Piyush Goyal: 50% of over 9,000 vacancies that are coming up for the posts of Constables and Sub-Inspectors in the railways will be for women.

#12:38 pm: State of Maharashtra files caveat in the Supreme Court in connection with Maratha reservation judgement by the Bombay High Court.

#12:27 pm: We are monitoring the situation in Jammu & Kashmir. Construction of bunkers in border areas will be done within time limit set by the previous home minister Rajnath Singh Ji. Life of every individual is important to us: Amit Shah in Lok Sabha.

#12:24 pm: In the view of Ramzan and Amarnath Yatra in Jammu and Kashmir, preparations are underway to hold Assembly elections by the end of this year, says BJP president Amit Shah.

#12:19 pm: Union Home Minister Amit Shah in Lok Sabha: I propose that President's rule in Jammu and Kashmir should be extended by 6 months.

#12:18 pm: Farooq Abdullah, National Conference: PM Modi talks about terrorism everywhere, there is nothing new in it but Trump has also taught us a good lesson, he told us to lower tariffs. Both of them should talk and do something about it, so that our relations with USA stay healthy.

#12:05 pm: One CRPF personnel has lost his life and another personnel injured in an encounter with Maoists in Keshkutul area of Bijapur, Chhattisgarh.

#12:00 pm: West Bengal Government seeks names of Government and aided schools having more than 70% minority students, to send a proposal for the construction of dining hall for mid-day meal in schools.

#11:55 am: Supreme Court refuses to interfere with the petition filed by Aam Aadmi Party (AAP) legislator, Devinder Sehrawat, who had challenged the disqualification notice issued to him by the Delhi Assembly Speaker under the anti-defection law.

#11:50 am: IMD, Mumbai: Intense spell of rainfall likely to occur in the districts of Greater Mumbai, Thane, Palghar during next four hours.

#11:48 am: DMK MP Dayanidhi Maran gives adjournment motion notice in Lok Sabha over "lynching of a Muslim man in Jharkhand".

#11:37 am: BJP 'Mahila Morcha' worker & her son shot at in Kanjhawala allegedly by a relative, earlier today. Both the injured have been admitted to a hospital.

#11:13 am: Mumbai International Airport Pvt. Ltd. (MIAL) Spokesperson: Currently, the visibility is 1500 meters, operations are normal. There was only one diversion around 9 am.

#10:59 am: Union Minister Arjun Ram Meghwal: BJP has issued a three line whip for its Lok Sabha MPs for today. A resolution for extension of President’s rule in Jammu and Kashmir and Jammu and Kashmir Reservation Act are on list of business today.

#10:43 am: Karnataka CM HD Kumaraswamy at Ujalamba village in Bidar district: I am travelling to New Jersey to participate in a foundation laying ceremony of Adichunchanagiri Mutt. It is not an official tour. I travelling on my personal expenses.

#10:24 am: Rainfall leads to water logging in Dharavi area in Mumbai, Maharashtra.

#10:12 am: Income-Tax raids underway at 12 locations of Narnoli Jewellers Group including residential and official premises of group owner Sunil Agrawal in Jaipur, Rajasthan.

#09:06 am: Five people including a child killed after a private bus rammed into a parked truck on Agra-Lucknow highway near Fatehabad, today.

#08:57 am: Arms and ammunition recovered after an encounter broke out between security forces and Maoists in Chhattisgarh's Rajnandgaon.

#08:11 am: One terrorist gunned down in Jammu and Kashmir's Budgam encounter

#07:47 am: A 19-yr-old boy was awarded life imprisonment yesterday after being convicted for committing unnatural sex with and then murdering a 10-year-old boy on June 28, 2017, when he the convict was a juvenile.

#07:43 am: Terrorism is the biggest threat to humanity. Not only it takes lives of the innocents, it negatively affects economical development and communal harmony. We have to stop all mediums of support to terrorism and racism, says PM Modi during BRICS meeting on the sidelines of G20 Summit in Osaka. 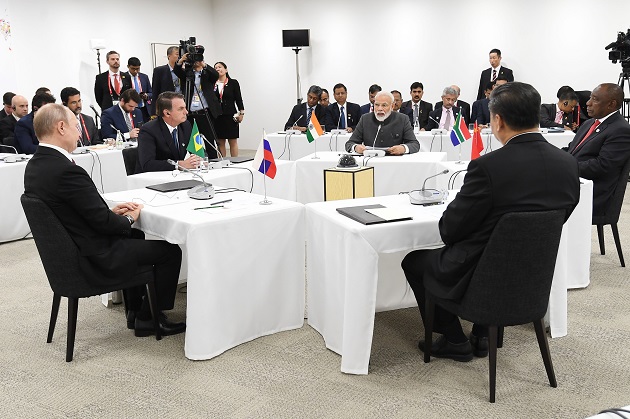 #07:26 am: An informal BRICS meeting is underway in Osaka, on the sidelines of G20 Summit.

Japan: An informal BRICS meeting is underway in Osaka, on the sidelines of #G20Summit pic.twitter.com/0f1TK2GfHI

#07:23 am: Hyderabad Police's Central Crime Station (CCS) has arrested a person from Delhi for duping people in Telangana and other states in the name of online business involving bitcoins. Case registered. Investigation underway. 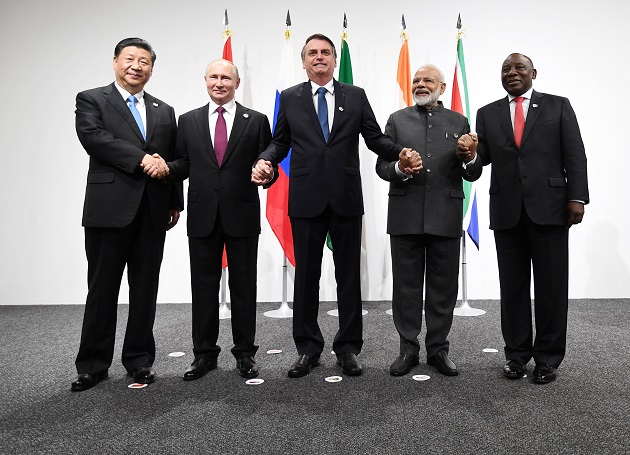 #07:17 am: The United Nations chief has urged G-20 leaders to take action on equitable and stable reforms to strengthen the global financial safety net and increase the global economy's resilience.

#07:08 am: Chinese President Xi Jinping arrives at the venue of G20 Summit in Osaka.

#06:58 am: The message is the same as last 3 days. We've a lot of time, no rush. They can take their time. There is absolutely no time pressure. I think in the end hopefully it's going to work out. If it works out, great, if it doesn't, you will be hearing about it: Trump on ongoing tensions between US and Iran. 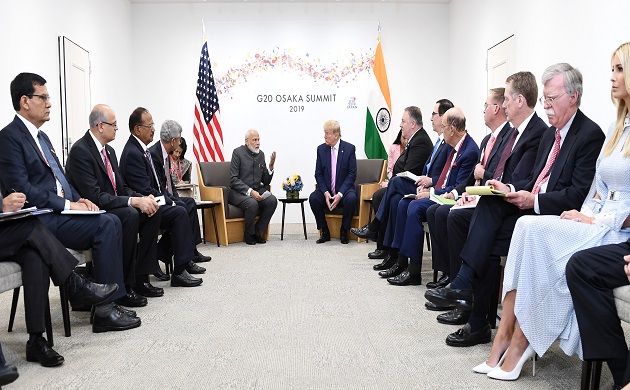 #06:51 am: You deserve victory. You've done a great job in pulling together. I remember when you first took over, there were many factions and they were fighting with each other and now they get along. It's a fantastic tribute to you and your abilities: Trump to Modi.

#06:37 am: We have become great friends and our countries have never been closer. I can say that with surety. We'll work together in many ways including military, we'll be discussing trade today: Donald Trump during bilateral meeting with PM Modi on the sidelines of G20 Summit in Osaka, Japan.

#06:32 am: PM Narendra Modi at bilateral meeting with US President Donald Trump in Osaka, Japan: In this meeting, I would like to have discussions on 4 issues- Iran, 5G, our bilateral relations and defence relations.

#06:26 am: PM Narendra Modi and US President Donald Trump hold talks during a bilateral meeting between India and US in Osaka.

#06:23 am: Prime Minister Narendra Modi at the trilateral meeting between United States, Japan and India in Osaka on the sidelines of G20 Summit : Japan, America and India, 'JAI', means victory.

#06:21 am: US President Donald Trump at the trilateral meeting between US, Japan and India in Osaka: Mr Modi, Congratulations on your great victory. I should say congratulations to both because Shinzo also had a great victory. You are doing a great job to your country.

US President Donald Trump at the trilateral meeting between US, Japan & India in Osaka: Mr Modi, Congratulations on your great victory. I should say congratulations to both because Shinzo also had a great victory. You are doing a great job to your countries pic.twitter.com/JLBu85lZ34

#06:20 am: Trilateral meeting being held between Japan, India and United States on the sidelines of G20 Summit in Osaka. 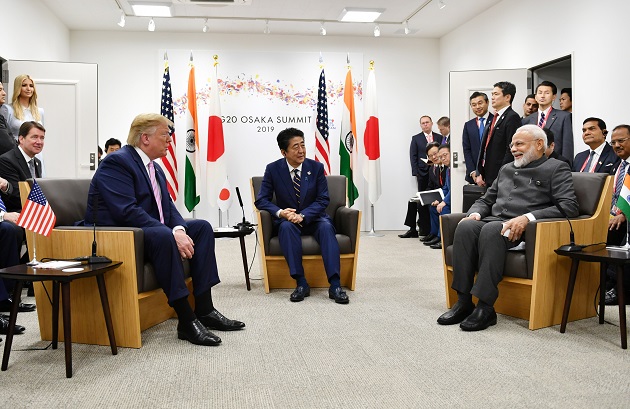 #06:19 am: Visuals: Exchange of fire between terrorists and security forces at Kralpora area in J-K's Budgam district. 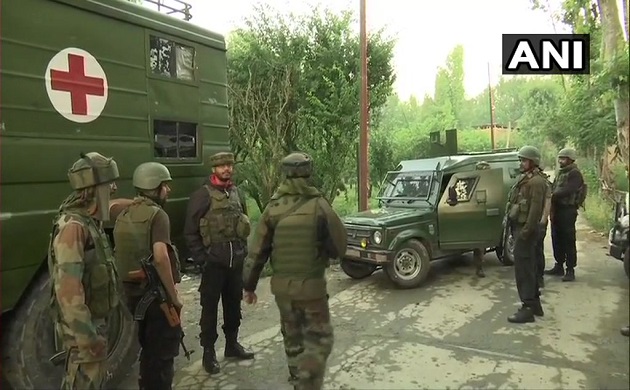 #06:18 am: Prime Minister Narendra Modi arrives at the venue of G20 Summit in Osaka.

#06:12 am: Four smugglers arrested yesterday from Pune; elephant tusks worth over Rs 3 crores recovered from three of them.

#06:10 am: The person who carried a Gurugram Kherki Daula Toll Plaza employee on the bonnet of his speeding car yesterday has been arrested.

#06:07 am: A milk tanker overturned yesterday spilling liters of milk on the streets in Rajasthan's Jhunjhunu. No injuries reported.

#06:00 am: Exchange of fire between terrorists and security forces at Kralpora area of Jammu and Kashmir's Budgam district. More details awaited