Breaking News June 3: This Is News Nation's Real-time Breaking Blog. Stay With Us As We Provide You All The Latest News And Updates As Soon As They Break.

"Jai Shree Ram" is the trending slogan in Indian politics with both BJP and West Bengal Chief Minister Mamata Banerjee directly taking on each other after the later got 10 people arrested for shouting the slogan at her. There is another meeting is scheduled in Ayodhya over the issue of Ram temple. Meanwhile, Pakistan today will hope their batting order don't falter this time around and register much needed win in the ICC World Cup 2019. Hello and welcome to News Nation real-time breaking blog. Be it politics, sports, business, world or entertainment, we will serve you all the latest news as soon as they break.Â

Below are the breaking news and latest updates of June 3, Monday: 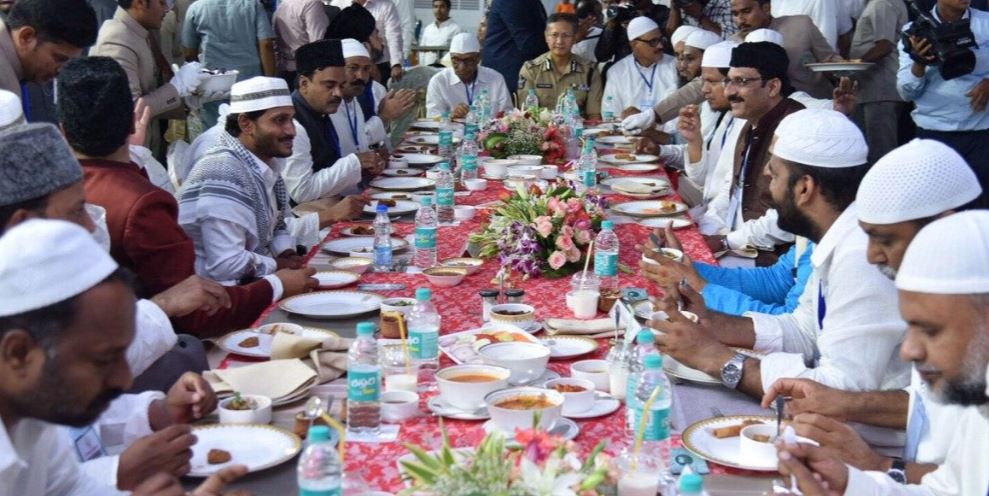 #10:07 pm:Â Jammu and Kashmir: Suspected terrorists fired upon Sameer Ahmad in the outskirts of Srinagar. Ahmad succumbed on his way to hospital.

#09:17 pm:Â Madhya Pradesh government has passed resolution to increase reservation quota for other backward classes (OBC) from existing 14 per cent to 27 per cent.

#08:51 pm:Â Delhi: Visuals of 'iftar' hosted by Delhi govt, Chief Minister Arvind Kejriwal and BJP leader Vijendra Gupta also present. Gupta says,'This event has nothing to do with politics and it's a day to meet and greet people with love and kindness. Do not politicise this event.'

#08:40 pm:Â Kalaburagi: Five dead and one injured in the district due to lightning strike.

#07:30 pm:Â Himachal Pradesh: Balagaad temple in Banjar valley of Kullu district partially damaged after a tree uprooted due to thunderstorm and fell on it.

#07:15Â  pm:Â SP MLA Hariom Yadav: Only Mayawati got benefited from the coalition, Samajwadi Party faced huge losses. If the coalition hadn't happened, Mayawati would have been at 0 and SP would have won 25 seats. Yadav community voted for her but Behen Ji's vote share went to BJP.

#07:05 pm:Â Indian Air Force on missing AN-32 Aircraft that last contacted ground sources at 1 PM: Search ops will continue from air&by ground parties of Indian Army through the night. Some reports of possible location of crash site were received, however, no wreckage has been sighted so far.

#06:15 pm:Â Delhi High Court dismisses the PIL seeking stay on the release of upcoming movie 'Bharat.' Petition stated that title of film is in violation of Section-3 Emblems and names (Prevention of Improper Use)Â  Act, according to which word 'Bharat' can't be used for commercial purpose.

#06:07 pm:Â Indian Air Force: The search for remaining 8 members of a trekking team who went missing whilst climbing the Nanda Devi peak in Uttarakhand continues along trek route.

#06:01 PM:Â ITBP: Equipment and bodies seen in open/ partially buried in snow through aerial view (Helicopter) today near the unclimbed peak where the 8 missing mountaineers who were reported heading towards Nanda Devi East at around 20000 ft.

#05:09 pm:Â West Bengal Chief Minster Mamata Banerjee: BJP is trying to spread fake news about West Bengal. Trinamool Congress will campaign from door to door. Save democracy, we don't want EVMs, return to ballot. There should be a fact finding committee on EVMs.

#04:49 pm:Â Pathankot, Punjab: Trial over in Kathua (Jammu and Kashmir) rape and murder case. Judgement to be pronounced on June 10 at 10 am.

#04:40 pm:Â Tamil Nadu: Newly-elected Congress MP from Kanyakumari, H Vasanthakumar, announces that he will donate the salary he'll receive as a parliamentarian to the poor and for education.Â

#04:35 pm:Â RLSP Chief, Upendra Kushwaha: I want to tell BJP, Nitish Kumar is known for disrespecting publicâ€™s mandate. Deceiving public & alliance partners is his old habit. So BJP must be ready for 'dhoka no. 2.' It's been said about him 'aisa koi saga nahi jinko Nitish ji ne thaga nahi.'

#04:33 pm:Â Goa: BJP finalises the name of Bicholim MLA Rajesh Patnekar for the post of speaker of state Legislative Assembly.

#04:30 pm:Â BSP sources on today's meeting of party leaders: It was a closed door review meeting, election results were discussed. It was analysed why we lost, how we lost. Several issues including EVMs were discussed. No decision or discussion took place on the future of Gathbandhan.

#03:57 pm:Â IAF AN-32 Aircraft overdue for more than two hours in Menchuka air field of Arunachal Pradesh with 13 persons on board. The aircraft last contacted ground sources at 1 PM today after taking off from Jorhat airbase at 12:25 pm.

#03:49 pm:Â Defence Minister Rajnath Singh at Siachen base camp: I salute your spirit, your valour from the bottom of my heart. Jawans and officers in the Armed forces have a sense of pride, that is the strongest sentiment in the heart of any human.

#03:23 pm:Â Delhi BJP Chief, Manoj Tiwari on 'Metro, bus rides to be free for women, says Delhi CM': He promised to deploy Marshals for safety of women & panic buttons in buses, it seems he himself is now panicking. He can't understand what new tactic to use to mislead people of Delhi.

#02:51 pm:Â Special Court in Mumbai has taken cognizance of the offence against Zakir Naik. Court accepted the chargesheet and fixed 19th June for hearing of the case. Enforcement Directorate had registered a money laundering case against Naik and others.

#02:42 pm:Â Advocate, Vijay Aggarwal: I have moved an application in Special CBI Court on behalf of my client Mehul Choksi seeking further investigation into PNB Scam matter. Notice has been issued and hearing is on 17th June.

#02:35 pm:Â Defence Minister Rajnath Singh: Paid tributes to the martyred soldiers who sacrificed their lives while serving in Siachen. More than 1100 soldiers have made supreme sacrifice defending the Siachen Glacier. The nation will always remain indebted to their service and sacrifice.

#02:25 pm:Â Defence Minister Rajnath Singh: Our soldiers in Siachen are performing their duty with great courage and fortitude even in extreme conditions and treacherous terrain. I salute their vigour and valour.

#01:35 pm:Â National Security Advisor Ajit Doval leaves from MHA. He has been given Cabinet rank in Government of India in recognition of his contribution in the national security domain. His appointment will be for five years.

#01:15 pm:Â Vijayasai Reddy,YSRCP: Chandrababu banned CBI, he prevented IT raids, he questioned how ED comes in the state. Now Jagan has issued orders allowing the CBI into the state. CM made it clear that thieves will not be spared. Look out Chandrababu.

#01:10 pm:Â NSA Ajit Doval given Cabinet rank in Government of India in recognition of his contribution in the national security domain. His appointment will be for five years.

#01:05 pm:Â Raghuvansh Prasad Singh, RJD: You know Nitish ji, he'll surely switch sides but no one can predict when will he do that or what will he say. This has never happened once but several times. It's not surprising...All I want is that everyone should come together, against BJP.

#12:55 pm:Â Delhi CM Arvind Kejriwal: On all DTC buses, cluster buses and metro trains women will be allowed to travel free of cost so that they have a safe travel experience and can access modes of transport which they were not able to, due to high prices.

#12.12 pm: Fire breaksÂ out in an Army barrack in Pulwama district of Jammu and Kashmir.

#12.11 pm:Â Around 250 Vishwa Hindu Parishad functionaries were booked for allegedly brandishing air guns and swords during a procession Sunday in Nigdi in Pimpri Chinchwad area.

#12.10 pm:Â The Supreme Court Monday granted three months time to the CBI to complete its probe, including into the murder aspect, in the Muzaffarpur shelter home case.

#12.09 pm:Â Doctor-turned-politician Harsh Vardhan Monday took charge as the Union Health Minister, almost five years after he was divested of the charge.

#12.08 pm:Â A top White House official said that President Donald Trump is "deadly serious" about imposing tariffs on imports from Mexico, but acknowledged there are no concrete benchmarks being set to assess whether the US ally is stemming the migrant flow enough to satisfy the administration.

If you have that 'Cricket keeda' in you, we have just the right contest for you!

#11:15 am:Â Nitu Tejwani, NCP leader from Naroda: I had gone to meet BJP MLA Balram Thawani over a local issue but even before hearing me he slapped me, when I fell down he started to kick me. His people also beat up my husband. I ask Modi ji, how are women safe under the BJP rule?

#11:10 am: Video:Â BJP's Naroda MLA Balram Thawani kicks NCP leader (Kuber Nagar Ward) Nitu Tejwani when she went to his office to meet him over a local issue yesterday. Nitu Tejwani has registered a complaint against the MLA.

#WATCH BJP's Naroda MLA Balram Thawani kicks NCP leader (Kuber Nagar Ward) Nitu Tejwani when she went to his office to meet him over a local issue yesterday. Nitu Tejwani has registered a complaint against the MLA. #Gujarat pic.twitter.com/dNH2Fgo5Vw

#11:05 am:Â General (Retd) VK Singh takes charge as the Minister of State in the Ministry of Road Transport and Highways.

#10:56 am:Â Karnataka CM HD Kumaraswamy has called a meeting of JD(S) MLAs and MLCs at his residence tomorrow.

#10:40 am:Â Jammu & Kashmir Police: Bodies of both the terrorists have been handed over to their legal heirs after completion of medico-legal formalities. Incriminating material including arms & ammunition were recovered from the spot.

#09:40 am:Â Odisha: 8 people died (2 each in Koraput, Kendujhar, Jajpur and Ganjam) and 5 people were injured (2 in Koraput & 3 in Dhenkanal) last night due to thunderstorm and lightning in parts of the state. The injured have been admitted to a hospital.

#09:30 am:Â Delhi: Dr Harsh Vardhan arrives at Ministry of Health and Family Welfare on a bicycle, to take charge as the Union Minister for Health & Family Welfare.

Delhi: Dr Harsh Vardhan arrives at Ministry of Health and Family Welfare on a bicycle, to take charge as the Union Minister for Health & Family Welfare. pic.twitter.com/8T6WVJtef1

#09:26 am:Â Odisha: 20 passengers were injured today morning when a bus which was going to Kesinga overturned near Rajmunda. All injured passengers admitted to a hospital. Three seriously injured persons have been referred to Bhawanipatna district hospital.

#08:58 am:Â Tamil Nadu govt issues order for all state govt staff, on attire permissible to them. States '...while in duty, saree/salwar kameez/churidaar with dupatta, for females staff&shirts with formal pants/veshti reflecting Tamil culture or any Indian traditional dress, for male staff.'

#08:46 am:Â Sneha, who appeared in 'Period. End of Sentence' that won Oscars'19 for 'Best Documentary Short Subject', says, "We've left the unit (NGO Action India) as we've not been paid our salaries for April and May. They asked Suman to give them one lakh which she received as prize money."

#08:35 am:Â Fire broke out in Maratha Mohalla near Jammu railway station last night. Around 150 jhuggis, including 41 of those belonging to Rohingyas, were gutted in fire. Residents say "It was a massive fire, wind fuelled it. Fire brigade came after an hour. No one from admn has come."

#08:20 am:Â Defence Minister Rajnath Singh to visit Srinagar today. The Minister would be briefed about the security situation in the Kashmir valley and the counter insurgency operations being carried out by the security forces there.

#07:49 am:Â Union Min Babul Supriyo on WB CM's reaction to 'Jai Shri Ram' slogans: She is an experienced politician but her behavior is abnormal&bizarre. She should keep in mind the dignity of the post she holds. She should take a break for a few days. She's rattled by BJP's presence in Bengal

#07:30 am: Rajasthan:Â The highest maximum temperature of 48.9Â°C recorded at Churu district yesterday.

#07:13 am:Â Supreme Court to hear Muzaffarpur (Bihar) shelter home case today. Over 30 girls were raped while few of them killed by the owner of a state-run shelter home in Bihar'sÂ Muzaffarpur.

#07:09 am:Â At least 14 people were killed and 28 others sustained injuries after an explosive-laden car detonated in Syria's northwestern city of Azaz

#06:49 am: Shopian Encounter Update:Â One terrorist killed in the exchange of fire between security forces and terrorists in Molu-Chitragam area of Shopian district.

#6:45 am: Jammu & Kashmir: Exchange of fire between security forces and terrorists in Molu-Chitragam area of Shopian district. More details awaited.