Here In This Segment, News Nation Brings You Live News From Across The World. The Latest Stories Will Appear In Our Live Blog Below - Keep Scrolling.

Prime Minister Narendra Modi will arrive in Nashik to attend the last day of Maharashtra CM Devendra Fadnavis’s Mahajanadesh Yatra, speculations are on that the state Assembly elections might be announced the same afternoon or evening. The Cabinet is likely to consider an ordinance seeking to ban production, import, distribution and sale of electronic cigarettes, and a jail term for violators, sources said.The Prohibition of E-cigarettes Ordinance, 2019, was recently examined by a Group of Ministers (GoM) following directions from the Prime Minister's Office.

Here are the LIVE updates

Prime Minister of Pakistan, Imran Khan says, " there's no chance of talks with India on Kashmir until curfew is lifted": Pakistan media.

Delhi: 3 people injured after a bus crashes into 7 cars near Akshardham Temple; injured admitted to hospital.

DRDO Sources: Third firing of Astra Beyond Visual Range Air to Air Missile was successfully carried out by Air Force and Defence Research and Development Organisation today. The missile hit the live aerial target near Odisha at maximum range of approximately 90 km.

In Message To US, Iran Denies Role In Drone Attacks On Saudi Aramco Facilities

Iran has sent the United States a diplomatic note denying any role in attacks on Saudi oil installations and warning of a response to any action, state media said Wednesday. The formal memo sent on Monday through the Swiss embassy, which represents US interests in Tehran, "emphasised that Iran has not played any role in this attack and denies and condemns" the US claims to the contrary, the official IRNA news agency said.

The Supreme Court on Wednesday expressed serious concern over people dying during manual scavenging and sewage cleaning in India, saying nowhere in the world people are sent to "gas chambers to die". While making scathing observations, the apex court said though more than 70 years have passed since Independence, caste discrimination still persists in the country. A bench headed by Justice Arun Mishra questioned Attorney General K K Venugopal, appearing for the Centre, as to why proper protective gear like mask and oxygen cylinders were not being provided to people who are engaged in manual scavenging and cleaning of sewage or manholes.

West Bengal Chief Minister Mamata Banerjee will meet Prime Minister Narendra Modi in New Delhi at 4:30 pm on Wednesday. “An appointment was sought by the chief minister’s office last week for an appointment from Modi’s office for the meeting. It will take place in New Delhi on Wednesday,” an official said. The West Bengal CM is likely to take up matters pertaining to central funds that are due to the state. According to reports, administrative issues of West Bengal will also be on agenda when both leaders meet in New Delhi.

The European Union Parliament on Wednesday slammed Pakistan for its support to terrorists and supported India's stance on Kashmir. The parliament also rejected the demand of Pakistan for invervention in the Kashmir matter and asked India and Pakistan to engage in direct dialogue on to ensure a peaceful resolution to the issue.

Vinesh Phogat on Wednesday became the first Indian wrestler to qualify for the 2020 Tokyo Olympics. Vinesh sealed the India’s first Tokyo Olympics berth in wrestling with an 8-2 win over Sarah Hildebrandt of USA in her second bout of the repechage round. With this win, the Asian Games gold medallist Vinesh Phogat also qualified for the bout for bronze medal at the ongoing Wrestling World Championship. She is now just one win away from clinching her maiden Worlds medal.

A pregnant woman along with her two sisters was allegedly stripped naked, tortured and brutally thrashed at a police chowki in Assam’s Darrang district. Read Complete Story HERE.

Hindi Shouldn't Be Imposed, None Of Southern States Will Accept It: Superstar Rajinikanth

Superstar Rajinikanth on Wednesday said that Hindi language shouldn't be imposed. His comments came a day after another actor-turned-politician Kamal Haasan voiced his concern on the language row. “If there is a common language it's good for the unity and progress of the country. Unfortunately it can't be implemented in our country. However, forcing a language is not acceptable. Southern state will not accept Hindi imposition. Even some northern states will not accept Hindi Imposition," Rajinikanth said. On Saturday, on occasion of Hindi Diwas, Union Home Minister Amit Shah had said that, ‘Hindi language has been a unifying force in India and emphasised that the country needs a language which can represent India in the world.’

Senior Congress leaders Ghulam Nabi Azad and Ahmed Patel met former finance minister P Chidambaram at Tihar Jail on Wednesday morning, sources said. They were accompanied by Chidambaram’s son and Congress MP, Karti. The leaders are learnt to have discussed the current political situation, including Kashmir, upcoming elections and the economic situation in the country, during the half-hour meeting, the sources added.

In a shocking case, a 12-year-old boy has been arrested for murdering his teacher in Mumbai’s Govandi area. The victim has been identified as one Ayesha Hushi. The 30-year-old used to run coaching classes from her home, where she lived alone after her divorce. The incident took place on September 16. After the class, the boy’s mother told him to go to his teacher for some money. The boy visited his teacher but Ayesha refused. After his mother insisted, the boy went again and demanded money. An argument broke out between the minor and his teacher. Ayesha scolded him in front of other students.

Chief Justice of India Ranjan Gogoi on Wednesday said that hearing in the Ayodhya case is likely to be completed by October 18. He also said that the Supreme Court is still open to the idea of mediation panel in the case. A five-judge Constitution bench headed by Chief Justice Ranjan Gogoi said it has received a letter from former Supreme Court judge F M I Kalifulla, who was heading the three-member mediation panel, saying some parties have written to him for resumption of the mediation process. The observation came after the top court asked both sides to indicate a tentative timeline for completion of their arguments in the case.

Rupee Rises 35 Paise To 71.43 Against US Dollar In Early Trade

The Indian rupee appreciated by 35 paise to 71.43 against the US dollar in early trade on Wednesday as gains in domestic equity market and easing crude prices strengthened investor sentiments. Forex traders said reports that half of Saudi Arabia’s daily production has been recovered post-attack enthused investors. Saudi Arabia’s energy minister has said that more than half of the country’s daily crude oil production that was knocked out by an attack had been recovered.

Saina Nehwal suffered a first round exit from 2019 China Open after losing 10-21, 17-21 to Thailand's Busanan Ongbamrungphan on Wednesday. It was her second consecutive defeat against the Thai player.

Defence Minister Rajnath Singh on Tuesday said that India aspires to become USD 10 trillion economy till 2030-32 in which the contribution of the Defence sector will be crucial. He said that the government is continuously working towards achieving a target of USD 26 billion defence industry by 2025 with the exports target being USD 5 billion. Rajnath Singh, who was addressing the second annual session of society of Indian Defence Manufactures in New Delhi, said that under the ‘Make In India’ initiative, the defence sector has emerged as one of most prominent sectors in the country.

Amid ongoing tension over Kashmir, Pakistan is making desperate attempts to create tension on the Line of Control. The Indian Army thwarted the infiltration attempt, which was carried out by a team of Pakistani Special Service Group commandos on September 12-13. The army released the video of the brazen attempt on Wednesday. The one minute 44-second grainy clip shows Indian troops launching grenades at SSG commandos using Under Barrel Grenade Launchers. 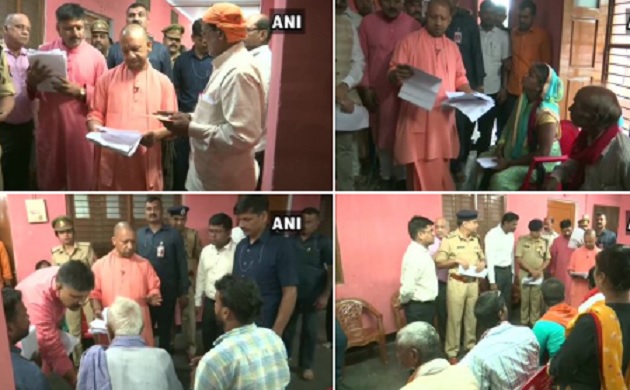