This Is News Nation's Real-time Breaking Blog. Stay With Us As We Provide You All The Latest News And Updates As Soon As They Break.

After taking oath, Narendra Modi will hold a Cabinet meeting today to decide the agenda of his government for the next five years. He faces a bunch of challenges as the economy of the country is slowing down and job and farm crisis make it even worse for him. In sports, ICC Cricket World Cup 2019 has started with a bang for hosts England as they thrahsed South Africa by 104 runs in their opening encounter. Today, West Indies will lock horns with Pakistan in the second match of the cricket's biggest event. Hello and welcome to News Nation real-time breaking blog. Be it politics, sports, business, world or entertainment, we will serve you all the latest news as soon as they break.

Below are the latest news and updates of India and World:

#08:25 pm: Defence Secretary Sanjay Mitra gets an extension of three months. He was supposed to retire from service today after completion of two year-tenure.

#08:01 pm: The Cabinet has also approved a new Central Sector Scheme, Pradhan Mantri Kisan Pension Yojana. It's a voluntary  and contributory pension scheme for small and marginal farmers across the country.Central Govt will contribute to the pension fund in equal amount as contributed by the farmer.

#07:55 pm: Union Minister of Agriculture and Farmer Welfare, Narendra Singh Tomar: Cabinet has approved the extension of Pradhan Mantri-Kisan yojana to all farmers. Nearly 14.5 crore farmers will benefit from the scheme.

#07:40 pm: Jammu and Kashmir Police on today's encounter in Tral, Pulwama: Two terrorists killed in the operation, arms and ammunition recovered. Identities and affiliations of the terrorists being ascertained. 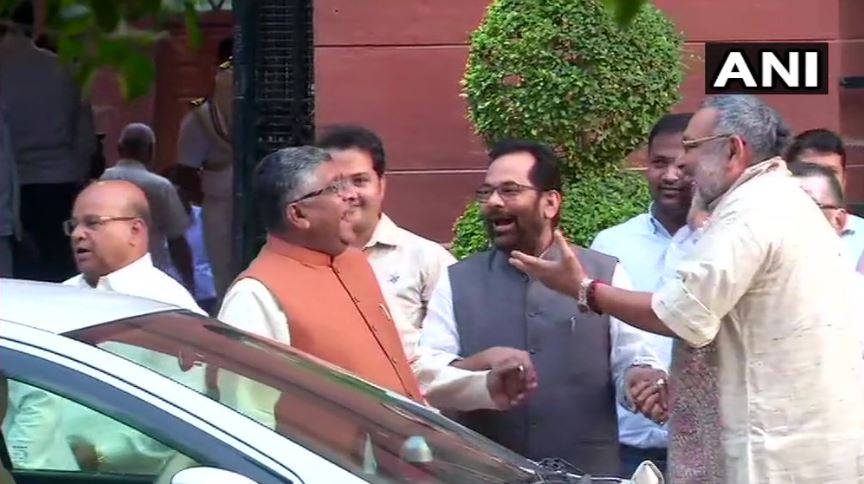 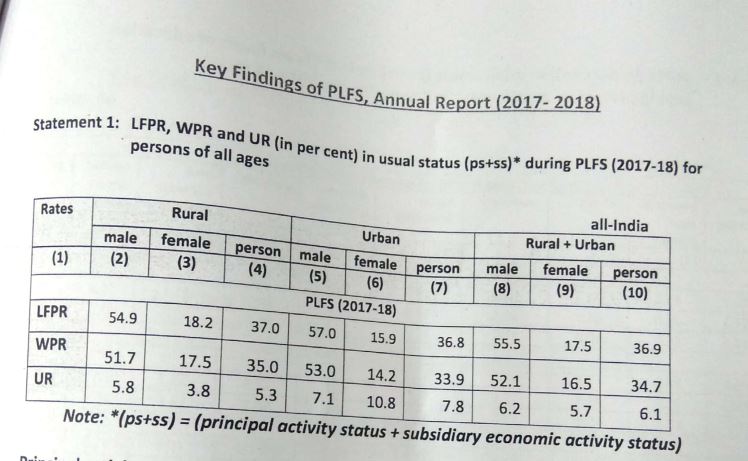 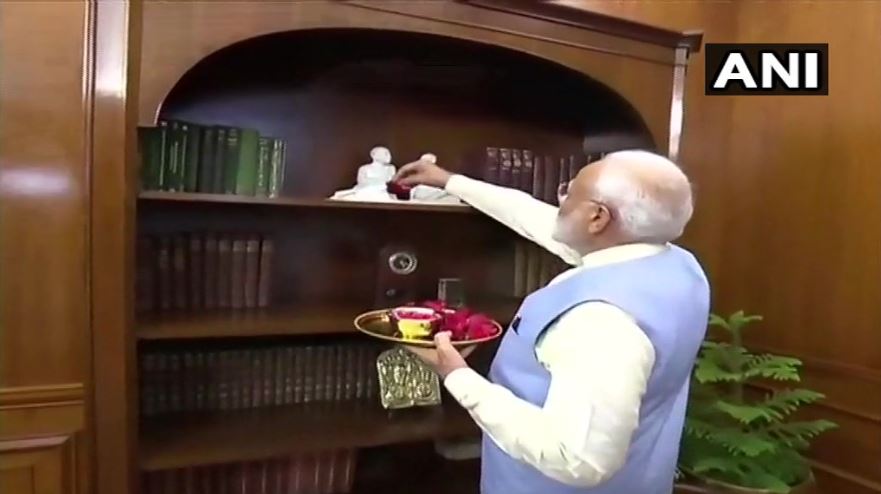 #05:46 pm: Ambit of the Scholarship Scheme is extended to the wards of State Police officials who are/were martyred during terror/naxal attacks. The quota of new scholarships for wards of state police officials will be 500 in a year.

Our Government’s first decision dedicated to those who protect India!

#05:43 pm: First decision of PM Narendra Modi on assuming his office is approval to a major change in the 'Prime Minister’s Scholarship Scheme' under the National Defence Fund.

#05:20 pm: Delhi: Kiren Rijiju takes charge as the Minister of State (Independent Charge) of the Ministry of Youth Affairs & Sports. 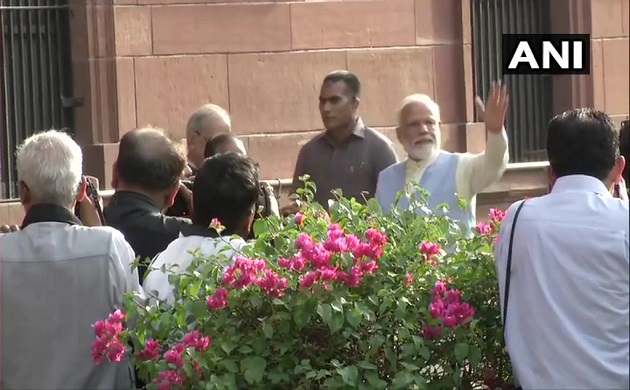 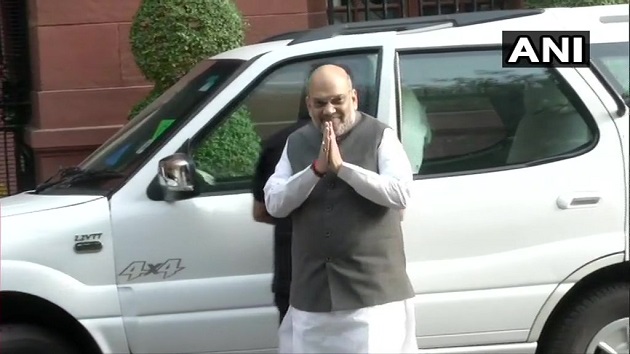 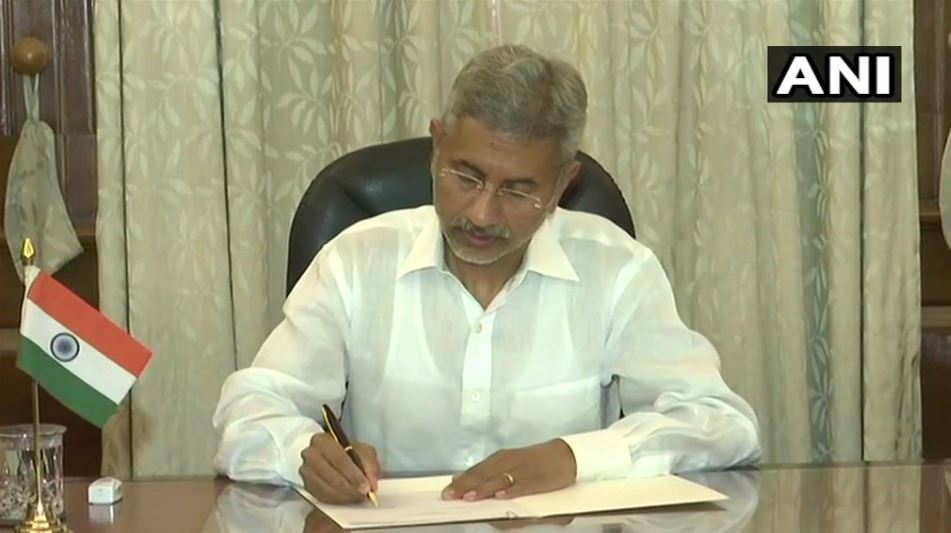 #03:21 pm: Robert Vadra didn't turn up before Enforcement Directorate (ED) for questioning today due to illness according to his lawyers. His lawyers have sought the next date for his appearance before the agency.

#02:51 pm: President of Sri Lanka Maithripala Sirisena in Delhi: It is with great pleasure that I participated in the swearing-in ceremony. We convey our best wishes to the people of India and Prime Minister Narendra Modi. 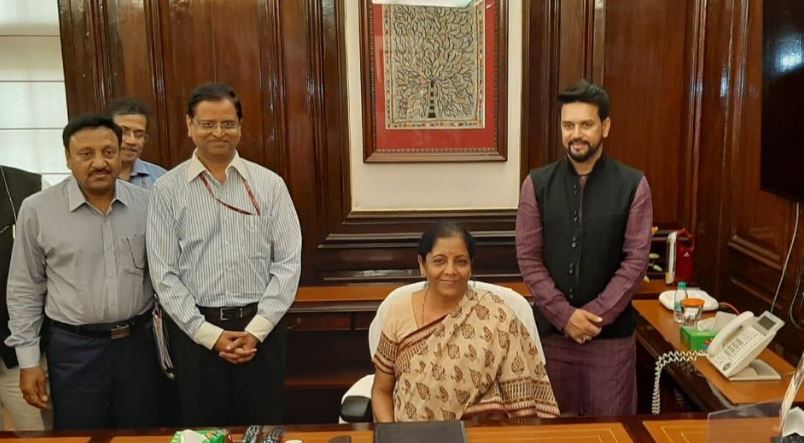 #02:30 pm: Total three terrorists have been neutralised in the encounter which broke out between terrorists and security forces in Dragad Sugan area of Shopian district earlier this morning. Arms and ammunition recovered.

#02:17 pm: India Meteorological Department: Rainfall over the country as a whole for the 2019 southwest monsoon season (June to September) is most likely to be normal.

#01:55 pm: Flight Lieutenant Mohana Singh has become the first woman fighter pilot to be qualified to undertake missions by day on Hawk advanced jet aircraft. Singh, along with two other women Bhawana Kanth and Avani Chaturvedi, had joined the fighter stream in June 2016.

#01:30 pm: Portfolios announced - check out the full list of who gets what in Modi Cabinet 2.0

#01:20 pm: Nitish Kumar on ministerial birth to JD(U): When I was told one ministerial berth will be given to JD(U), I said we don't need it but I'll ask my party. I asked everyone, they said it's not appropriate that we show only symbolic participation when we're together. We're together, not upset.

#01:15 pm: Admiral Karambir Singh takes over as the chief of the Naval staff. He replaces Admiral Sunil Lanba, who is retiring today. (Pic credit: Twitter account of Spokesperson Navy)

#01:10 pm: In their bilateral meeting PM of Mauritius Pravind Kumar Jugnauth extended his warm felicitations to PM Modi. PM Modi thanked him and reiterated his commitment to further strengthening the fraternal and enduring bilateral ties between the two countries in all spheres.

#12:55 pm: The leaders noted that terrorism and extremism continue to pose threat to humanity and committed to closer bilateral cooperation for peace and security in South Asia and the Indian Ocean region.

#12:50 pm: In the bilateral meeting today, Sri Lankan President Maithripala Sirisena congratulated PM Narendra Modi and reiterated his desire to work together to strengthen relations between the two countries for peace, prosperity and security in the region.

#12:35 pm: Bulat Sarsenbayev, Ambassador of the Republic of Kazakhstan to India: We are the largest economic & trade partner of India in the region. Hope this trend will continue. It is in our plans to schedule a visit of our Head of State, to India, at the end of this year.

#12:15 pm: Bulat Sarsenbayev, Ambassador of Republic of Kazakhstan to India:It was a historic moment for India, y'day. It's a good sign for India because PM Modi started many reforms.Takes time to change situations, to implement ideas.I think PM Modi needed a 2nd term to further the reforms

#12:10 pm: Some suspicious object was found at KSR Central Station in Bengaluru this morning. Bomb disposal squad was called in. Station premises was thoroughly checked. Alok Mohan, Addl DGP (Railways) says,"We're investigating, nature of the object is yet to be ascertained."

#12:05 pm: Hockey teams from Poland and Russia arrive in Bhubaneswar for the FIH Men’s Series Finals. The series will be held from June 6 to June 15.

#11:55 am: Delhi High Court issues notice to Centre on a PIL seeking a Uniform Civil Code for all citizens in spirit of Article 14, 15 & 44 of the Constitution. Next date of hearing is July 8. Delhi HC has sought reply from MHA, Law Commission on plea for Uniform Civil Code.

#11:50 am: Union Minister Pratap Chandra Sarangi: I am fortunate that PM Modi has placed his trust in me & I consider politics as a medium to serve the nation. Our party stands for - nation first, party second and self last. I will try my best to win the trust of Modi ji & common people.

#11.30 am: A suicide car bomb exploded early Friday morning in an eastern neighborhood of the capital Kabul, leaving seven casualties. The attacker struck in the eastern Yakatot neighborhood, where U.S. and NATO forces maintain complexes as well as facilities operated by the Afghan National Security Forces.

#11:25 am: Replica of Rafale jet erected outside Air Chief Marshal BS Dhanoa’s residence in Delhi. His residence is next to Congress Headquarters.

#11:20 am: CBI has moved an application in Delhi High Court for early hearing in 2G appeal case. Court has issued notice to A Raja&other accused in the case&has fixed the matter for hearing on 30 July. CBI & ED had earlier approached Delhi HC against acquittal of all accused by trial court.

#11:08 am: Supreme Court agrees to hear on Monday an appeal filed by Tamil Nadu govt challenging the Madras HC order of April 8 that quashed the land acquisition proceedings initiated by the Centre & State govt for the Rs 10,000 crore Chennai-Salem eight-lane greenfield expressway project.

#11:05 am: Delhi High Court grants 4-month extension to CBI to investigate the charges of bribery against Rakesh Asthana and others. Court has passed the order on the application of CBI seeking extension of time to investigate bribery allegations in the FIR.

#10.50 am: Maharashtra: Fire broke out in Sandesh Dawa Bazaar of Nagpur, due to short circuit in a medical shop, last night. Fire tenders are present at the spot, fire fighting operations are underway. No casualties or injuries have been reported.

#10:40 am: Update: One more terrorist has been neutralised in the encounter which broke out between terrorists and security forces in Dragad Sugan area of Shopian district earlier this morning. Operation is underway.

#10:30 am: BSP chief Mayawati has called a meeting of newly elected MPs of the party, zone incharge and district presidents on June 3, in Delhi. Other senior members of the party will also be present at the meeting.

#10:20 am: Maharashtra: Fire broke out in Sandesh Dawa Bazaar of Nagpur, due to short circuit in a medical shop, last night. Fire tenders are present at the spot, fire fighting operations are underway. No casualties or injuries have been reported.

#09:45: North Korean leader Kim Jong Un has executed five officials for their part in the failed second summit with US President Donald Trump. According to Bloomberg News report North Korea's special envoy to the US and four other North Korean Foreign Ministry officials were executed in March because of the breakdown of the February summit in Hanoi, Vietnam.

#09:02 am: The first meeting of the new cabinet to take place later today, in Delhi - ANI

#08:45 am: US will impose a 5% tariff on all goods from Mexico starting June 10 until "illegal migrants" stop coming, says Donald Trump

#08:35 am: Shopian encounter update: One terrorist has been neutralised in the encounter which broke out between terrorists and security forces in Dragad Sugan area of Shopian district earlier this morning. Operation is underway.

#08:30 am: Indore: Fire broke out at a transformer at main power house of electricity department last night and spread in the entire power house. Fire fighting operations underway. Electricity connections in the city affected.

#08:25 am: Leon Redbone, the acclaimed singer and guitarist who performed jazz, ragtime and Tin Pan Alley-styled songs, has died. He was 69.

#08:20 am: The body of late opposition leader Etienne Tshisekedi arrived home in Congo more than 2 years after his death.

#08:15 am: Jammu and Kashmir: Exchange of fire between terrorists and Security forces in Dragad Sugan area of Shopian District. (Spots visuals deffered by unspecified time)

#08:12 am: US has warned countries buying Iranian oil. Says will be subject to sanctions.

#08:10 am: US President Donald Trump announces new 5% tariff on Mexican goods to pressure country to halt flow of migrants. (AP)

#08:00 am: Jammu and Kashmir: Exchange of fire between terrorists and Security forces in Dragad Sugan area of Shopian District. More details awaited. (ANI)