Hello and welcome to Sunday's live blog. From politics to sports to entertainment, the Internet is buzzing with the breaking news and headlines from across the globe. While Prime Minister Narendra Modi is all set to address the Indian-American community at mega "Howdy Modi" event in Houston alongside US President Donald Trump, Union Home Minister Amit Shah will be delivering keynote address on revocation of Article 370 in Mumbai today. Meanwhile, cricket fever has once again gripped the nation ahead of the India vs South Africa 3rd T20 match in Bengaluru on Sunday. Here in this segment, News Nation brings you live news from all corners of the world. The latest stories will appear in our live blog below - so keep scrolling down.

02:45 pm: Navy Chief Admiral Karambir Singh is on a visit to Bangladesh from 21-23 September.

02:25 pm: Defence Minister Rajnath Singh, in Patna, Bihar: As far as Article 370 is concerned, it was a 'nasoor' (cankerous wound) in the Constitution which bloodied our piece of heart and the heaven on this earth - our Kashmir.

01:35 pm: "What have we seen in last 6 years? It started with the killing of Mohsin Shaikh in Pune. Then,Mohd Akhlaq was killed saying he is carrying beef. But it was reported later that it was not beef.Even if it was beef, who gave anyone the right to kill a person?": Congress leader Shashi Tharoor.

01:15 pm: I congratulate Prime Minsiter Modi's bravery and grit. He removed Article 370 and 35A in the very first session of the Parliament as soon as we formed the govt for the second time with 305 seats: Home Minister Amit Shah in Mumbai.

12:15 pm: 3 people died after the vehicle they were in, fell off Nijmula-Birahi road into a river, in Uttarakhand's Chamoli last night.

12:00 pm: Four unidentified assailants, in a four-wheeler, fired at police team near Akshardham temple in Delhi on Sunday morning.

10:40 am: Buildings in low-lying areas in Prayagraj continue to be partially submerged due to a rise in the water level of river Ganga. 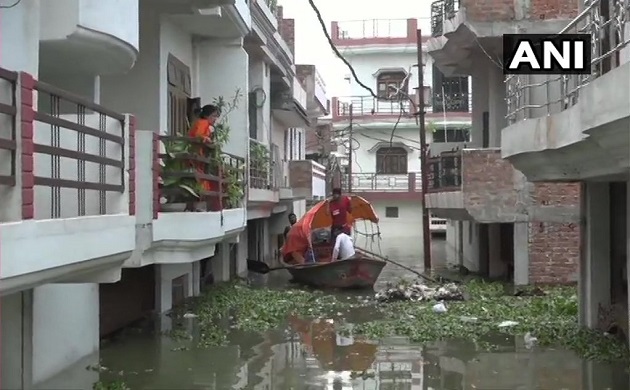 10:00 am: Uttar Pradesh Chief Minister Yogi Adityanath and other ministers of the state cabinet arrived at Indian Institute of Management (IIM) Lucknow, which is slated to conduct three sessions, starting from September 8, on 'Leadership Development Programme' for all the ministers in the state government.

09:15 am: Prime Minister Narendra Modi joins in reciting 'Namaste Sharade Devi' shloka while the Kashmiri Pandits meeting and interacting with him also recite it, in Houston.

08:45 am: Man allegedly killed his wife and one-year-old daughter before committing suicide by jumping in front of a train in Visakhapatnam.

08:15 am: Union Home Minister Amit Shah will deliver keynote address on removal of Article 370 around 11 am at NESCO complex, Goregaon East in Mumbai.

08:00 am: Those who cannot accept Vande Mataram have no right to live in India, says BJP leader Pratap Sarangi.

07:30 am: Karnataka Chief Minister BS Yediyurappa along with his two Cabinet Ministers arrives in Delhi, says,"we will meet our party president tomorrow at 8:30 am. We want to discuss about the political development and other things of our state".

07:00 am: Jammu and Kashmir: One Pakistani national, resident of Sialkot, has been apprehended by security forces in RS Pura Sector.

06:00 am: Idols of Goddess Durga being prepared in Guwahati, ahead of Durga Puja festival.

Assam: Idols of Goddess Durga being prepared in Guwahati, ahead of Durga Puja festival. pic.twitter.com/AyyNoKflLA