Here In This Segment, News Nation Brings You Live News From Across The World. The Latest Stories Will Appear In Our Live Blog Below - Keep Scrolling.

Prime Minister Narendra Modi will address a rally in Haryana's Rohtak today ahead of the upcoming assembly elections in the state. He will also lay the foundation stone for several development projects, including the Shri Sheetla Mata Devi Medical College in Gurugram, a mega food park, the industrial model township in Rohtak and the Integrated Command and Control Center in Karnal.

US President Donald Trump tweeted that secret meetings that were to be held at Camp David with Taliban leaders on Sunday had been cancelled following a bombing in Kabul last week. "I cancelled the meeting and called off peace negotiations," the US president said in a tweet.

Scroll for all the LIVE updates

Actors Amitabh Bachchan and Abhishek Bachchan, along with Mukesh Ambani and his family members, offer prayers at Lalbaugcha Raja in Mumbai.

All government and private schools in Bhopal district to remain closed tomorrow in view of the heavy rainfall in the district.

Mangaluru, Karnataka: Two children have died after boundary wall of a residence collapsed in Padil. Police have rushed to the spot.

Office of the Prime Minister: At 11:15 am tomorrow PM  Modi will address the 14th Conference of Parties (COP14) to UNCCD being held in Greater Noida, Uttar Pradesh. This conference will add to the global discourse on issues relating to the environment, especially land management.

Tamil film director and actor Rajasekhar passed away at a hospital in Chennai, earlier today.

Gorakhpur bound IndiGo Airbus 320 Neo aircraft made an emergency landing at Varanasi Airport today, due to technical glitch in the aircraft.

Union Defence Minister Rajnath Singh on 100 days of 2nd term of BJP Govt: Modi ji-led BJP govt has been working tirelessly from the very first day after taking oath. I consider that the work done in 100 days is incomparable&public is aware of whatever development has taken place.

Maharashtra CM Devendra Fadnavis constantly monitoring situation in view of heavy rains in parts of the state; requests Karnataka to release water from Almatti dam to avoid flood like situation in Kolhapur. Discharge from Almatti increased to 2,20,000 cusecs from 1,70,000 cusecs.

Prime Minister Narendra Modi pays last respects to former Union Minister Ram Jethmalani, who passed away this morning at the age of 95.

Suzuki Motor India to hold back investment due to slowdown, BS-VI norms

Suzuki Motor India Pvt Ltd has decided to hold back its planned investments on capacity enhancement due to the ongoing slowdown in two-wheeler sales and expectation of a hit in the market by the transition to stricter BS-VI emission norm from BS-IV in April 2020, according to a senior company official.

A Goa court on Sunday remanded swimming coach Surajit Ganguly, arrested for allegedly raping a minor girl training under him, in police custody for six days. Ganguly, who was was on the run since the case was registered, was arrested in New Delhi on Friday and brought to Goa late Saturday night following which he was taken to Mapusa police station, where the offence was registered against him.

Seventy cases of acid attacks were reported in Odisha between 2011 and 2019, an NGO providing relief to the survivors said. The data was presented at a symposium on "Eradication of Acid Violence" organised here on Saturday by the Acid Survivors and Women Welfare Foundation (ASWWF). ASWWF's Odisha chapter resident representative T N Panda said the organisation has provided support to 10 of the 70 acid attack survivors in Odisha.

A 4.9-magnitude earthquake hit Doda and Kishtwar districts of Chenab Valley region in Jammu and Kashmir on Sunday, officials said. There was no immediate report of any casualty or damage to property from anywhere, Senior Superintendent of Police, Doda, Mumtaz Ahmed said.

The quake occurred around 8.04 am and lasted for a few seconds, causing panic among people who rushed out of their homes in Bhaderwah, Doda and Kishtwar, the officials said.

A Jharkhand court has given life sentence to a middle-aged woman for poisoning two boys to death for stealing food. The incident had occurred in Dumka district five years ago.

Tight security arrangements have been made in the wake of the prime minister's rally.

The Pakistani army on Sunday targeted forward posts and villages in Jammu and Kashmir's Rajouri district with heavy firing and shelling, violating ceasefire along the Line of Control (LoC) for the second day in a row, an army official said.

The firing of small arms and shelling with mortars started in Sunderbani and Nowshera sectors around 10 am, drawing strong and befitting retaliation by the Indian army guarding the LoC, the official said.

After this historic mission, ISRO is getting ready for another shot at moon. ISRO is in talks with Japan Aerospace Exploration Agency (JAXA) for a mission to explore the moon’s polar region.

According to information on the international cooperation page of ISRO website, ISRO and JAXA scientists are conducting the feasibility study to realize a joint satellite mission to explore the moon’s polar region.

Political leaders across party lines condoled the death of eminent lawyer and former Union minister Ram Jethmalani, who passed away on Sunday.  Jethmalani, 95, passed away six days before his birthday on September 14. Union Home Minister Amit Shah drove to Jethmalani's residence and offered his last respects to the departed soul and condolences to the bereaved family. "Ram Jethmalani ji’s passing away is a irreparable loss to the entire legal community. He will always be remembered for his vast knowledge on legal affairs. My condolences to the bereaved family," he tweeted.

Prime Minister Narendra Modi on Sunday condoled the death of Ram Jethmalani, saying the country has lost an exceptional lawyer and an iconic figure who made rich contributions in courts and Parliament. Jethmalani, 95, passed away at his official residence in New Delhi on Sunday. PM Modi said Jethmalani was “witty, courageous and never shied away from boldly expressing himself on any subject”. 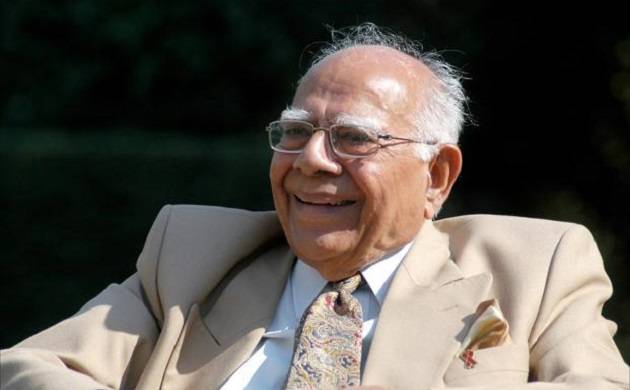 A 3.4 low-intensity magnitude earthquake hit Himachal Pradesh's Chamba district on Sunday, officials said. No loss of life or property was reported, they said. The epicentre of the earthquake was north-east of Chamba at a depth of 10 kilometres, Director, Shimla Meteorological Centre, Manmohan Singh, said.

A 3.4-magnitude earthquake was recorded at 5:30 am on Sunday, he said, adding that  mild tremors were also felt in adjoining areas of the district. Most parts of the state, including Chamba district, fall in the high-seismic sensitive zone.

Prime Minister Narendra Modi will address a rally in Haryana's Rohtak on Sunday ahead of the upcoming assembly elections in the state. He will also lay the foundation stone for several development projects, including the Shri Sheetla Mata Devi Medical College in Gurugram, a mega food park, the industrial model township in Rohtak and the Integrated Command and Control Center in Karnal, officials said. Modi will kick off the party's poll campaign in Haryana with the 'Vijay Sankalp' rally, the BJP said.

Cow urine to be used in medicines and treatment of cancer: Health Minister Ashwini Choubey

British Prime Minister Boris Johnson received a fresh blow on Saturday when senior minister Amber Rudd quit her post of work and pensions secretary in protest at his handling of the Brexit crisis.

US President Donald Trump on Saturday tweeted that secret meetings that were to be held at Camp David with Taliban leaders and the Afghan president on Sunday had been cancelled following a bombing in Kabul last week. “They were coming to the United States tonight. Unfortunately, in order to build false leverage, they admitted to an attack in Kabul that killed one of our great soldiers, and 11 other people,” Trump tweeted about the Taliban.

Earthquake with magnitude of 3.3 hits Karbi Anglong in Assam on Sunday morning at 7.03 AM: IMD