Ayodhya District Magistrate Anuj Kumar Jha Said That Section 144, Which Bars Gathering Of More Than 4 People, Will Be In Effect Till December 10.

In a big development, a local magisterial court on Sunday imposed section 144 in Ayodhya on account of the festive season and Supreme Court's decision in the Ayodhya land dispute case. In a magisterial order, Ayodhya District Magistrate Anuj Kumar Jha said that section 144, which bars gathering of more than 4 people, will be in effect till December 10.

He said the decision to impose restriction was being taken in view of the upcoming Diwali festival and in anticipation of the Supreme Court's verdict in the Babri Masjid-Ram Janmabhoomi land dispute case. The hearing in the politically sensitive Ayodhya dispute case is likely to conclude on October 17 and the top court is expected to deliver its verdict by November 18.

The protracted hearing in the politically sensitive Ram Janmbhoomi-Babri Masjid land dispute at Ayodhya will enter into the crucial final leg on Monday when the Supreme Court resumes proceedings on the 38th day after the week-long Dussehra break. 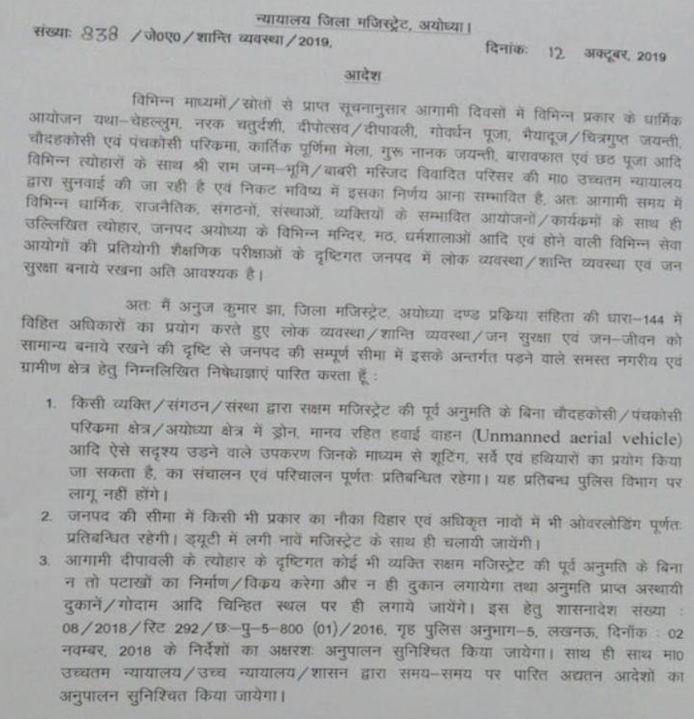 A five-judge Constitution bench headed by Chief Justice of India Ranjan Gogoi, which started the day-to-day proceedings on August 6 after mediation proceedings failed to find an amicable solution to the vexatious dispute, has revised the deadline for wrapping up the proceedings and has fixed it on October 17.

Fourteen appeals have been filed in the apex court against the 2010 Allahabad High Court judgment, delivered in four civil suits, that the 2.77-acre land in Ayodhya be partitioned equally among the three parties—the Sunni Waqf Board, the Nirmohi Akhara and Ram Lalla.

The restrictions have also come at a time when Hindu hardline organisation VHP announced to celerbate Diwali with Ram Lala inside the sanctum. Babri Masjid defendant Haji Mehboob has raised his objection to this and said if VHP is allowed, he will also read Namaz at the disputed site.