Among The States Ruled By The BJP And Its Allies, Counting Will Be Held For The Maximum 11 Seats In Uttar Pradesh, Followed By Six In Gujarat, Five In Bihar, Four In Assam And Two Each In Himachal Pradesh And Tamil Nadu.

Counting of votes began on Thursday for 51 assembly seats and two Lok Sabha constituencies spread across 18 states where by-elections were held two days ago. The BJP and its allies held nearly 30 of these assembly seats, while the Congress had won 12 and the rest were with regional parties. 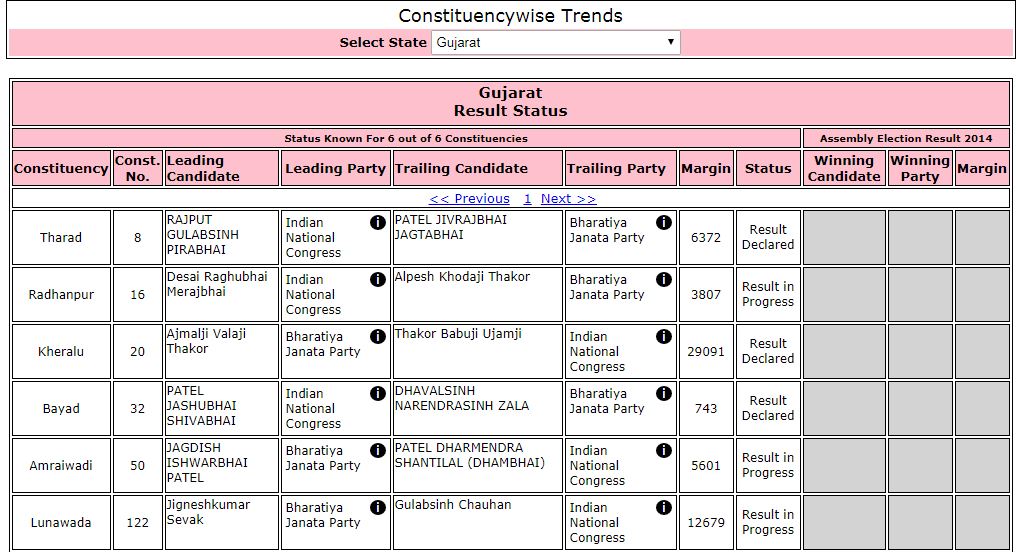 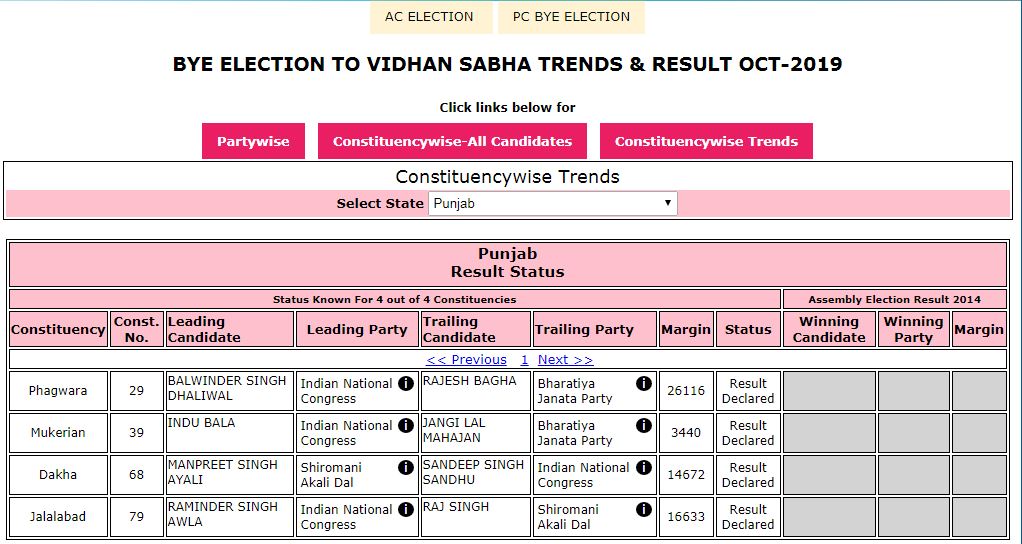 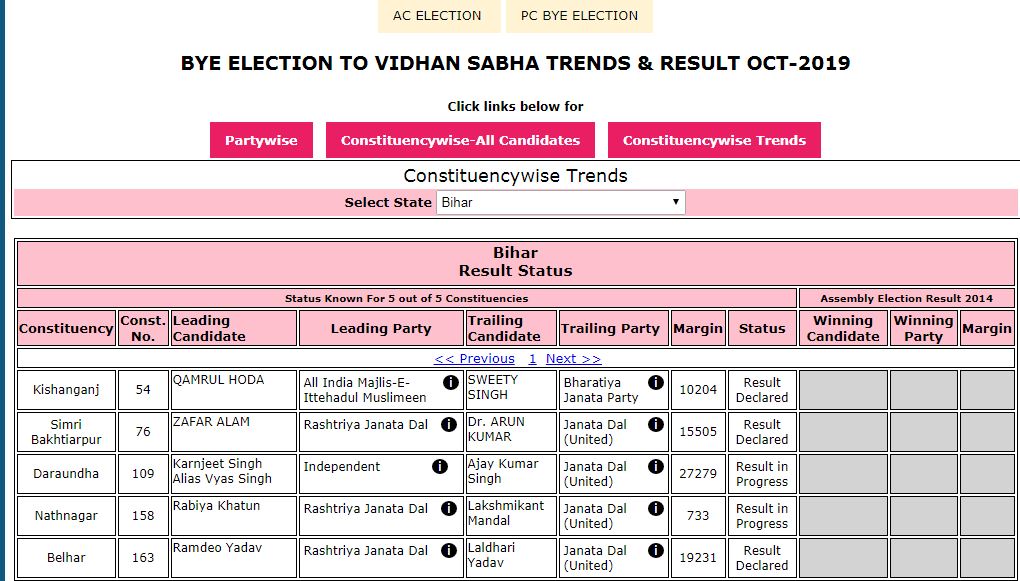 The ruling CPI(M)-led LDF registered impressive wins at Vattiyoorkavu and Konni, the two strongholds of the Congress headed UDF, while the opposition front retained the Ernakulam seat in the October 21 bypolls to the five assembly seats in Kerala. Thiruvananthapuram Mayor Prasanth, who contested at Vattiyoorkavu constituency won with a margin of 14,465 votes against his nearest rival, Congress party's K Mohankumar, while K U Jinesh Kumar won from Konni by a margin of 9,953 votes.The UDF candidate T J Vinod won the Ernakulam seat by a margin of 3,750 votes defeating Manu Roy (LDF-IND). While the three results were declared by the Election Commission, two more results are expected any time soon. While Prasanth polled 54,830 votes, Mohankumar got 40,365 votes and BJP's S Suresh could garner only 27,453 votes.

Of the six Assembly seats in Gujarat where bypolls were held on October 21, the Congress is now leading on four seats while the ruling BJP is ahead on two seats. In Radhanpur (Patan district), OBC leader and BJP candidate Alpesh Thakor is trailing behind Congress' Raghu Desai by over 8,700 votes. In Bayad (Arvalli), BJP candidate Dhavalsinh Zala is trailing behind Congress' Jashu Patel by over 700 votes. Sensing defeat, Zala left the counting centre and even accepted his defeat.

The ruling Congress is all set to win two seats, Jalalabad and Phagwara, while the Shiromani Akali Dal is also going to register victory over the Dakha seat in the Punjab bypolls, according to latest trends. There is a close fight on the Mukerian assembly segment between the Congress and the BJP. In Jalalabad, which is considered as an Akali bastion, Congress candidate Raminder Awla is way ahead of SAD candidate Raj Singh Dibipura by 11,252 votes.

The ruling BJP retained both Dharamshala and Pachhad seats in Himachal Pradesh where bypolls were held earlier this week. In Pachhad, Reena Kashyap of the BJP defeated her nearest rival former minister Gangu Ram Musafir of the Congress by a margin of 2,742 votes. Rebel BJP candidate Dayal Pyari, who contested as an independent candidate, finished a distant third with 1,1651 votes. The BJP's victory margin has been reduced as Dayal Pyari got over 11000 votes. In Dharamshala, BJP's Vishal Nehria defeated his nearest rival Rakesh Kumar by a margin of 6,758 votes. Kumar was a BJP rebel and contested as an independent candidate. Vijay Inder Karan of the Congress lost his security deposit as he failed to get even the required one-sixth of total polled valid votes.

MP Bypoll results: In Jhabua, Congress well ahead of BJP

Congress veteran Kantilal Bhuria is currently leading by 14,990 votes over nearest BJP rival Bhanu Bhuria in the Jhabua Assembly seat bypoll in Madhya Pradesh after the fifth round of counting.

The ruling BJP is ahead in six assembly seats in Uttar Pradesh and ally Apna Dal (S) in one, as per the latest trends on Thursday. The Samajwadi Party is ahead in two, while the Congress and the Bahujan Samaj Party are leading in the two remaining seats.

The BJP is leading in Manikpur, Ghosi, Iglas, Lucknow Cantt, Govindnagar and Balha, while its ally Apna Dal (Sonelal) is ahead in Pratapgarh.

The SP is ahead in Rampur and Zairpur, the BSP in Jalalpur and the Congress in Gangoh.Of the 11 seats of the state where bypolls were held on Monday, eight were held by the BJP and one by its ally Apna Dal (Sonelal). Two other seats were shared by the Samajwadi Party and the BSP.

Odisha bypoll: BJD leads over BJP by 75,247 votes in Bijepur

BJD candidate Rita Sahu has established a lead of 75,247 votes over her nearest rival Sanat Gartia of the BJP in the by-poll to Odisha's Bijepur

The ruling BJP on Thursday won the Dharamshala bypoll in Himachal Pradesh, with its candidate Vishal Nehriya winning by a margin of 6,673 votes. Nehriya defeated his nearest rival Rakesh Kumar, an independent candidate. Congress candidate Vijay Inder Karan was at the third place. In the 2017 Assembly elections, the victory margin of Kishan Kapoor of the BJP over Sudhir Sharma of the Congress was of 2,997 votes in Dharamshala.

Sikkim Chief Minister Prem Singh Tamang aka as P S Golay of the Sikkim Krantikari Morcha (SKM) is leading over his nearest rival Moses Rai of the Sikkim Democratic Front (SDF) by a margin of 8,727 votes in the by- poll to the Poklok Kamrang Assembly constituency in the state. While Tamang has secured 10,585 votes, Rai garnered 1,858 votes, as per the latest trends.

BJP leading in both Assembly seats in Himachal Pradesh:

The ruling BJP is leading in both Dharamshala and Pachhad seats of Himachal Pradesh where bypolls were held on Monday, a state election official said. After the first round of counting, Vishal Nehriya of the BJP is leading with 1,187 votes over his nearest rival Vijay Inder Karan (1543 votes) of the Congress in Dharamshala.

In Pachhad, Reena Kashyap of the BJP is leading with 1,543 votes over her nearest rival Gangu Ram Musafir of the Congress after the first round of counting.

Counting is on for the four assembly constituencies in Assam — Jania, Sonari, Ratabari and Rangapara.

Punjab Bypolls Results: Congress Ahead In 3 Seats, SAD Leading In 1

The Congress is ahead in the three seats of Jalalabad, Phagwara and Mukerian, while the SAD is leading in Dakha in the bypolls to four assembly seats of Punjab, as per early trends. Congress nominee Balwinder Singh Dhaliwal is leading over his nearest rival and BJP nominee Rajesh Bagha by a margin of 1,852 votes from Phagwara seat, according to initial trends. From Mukerian seat, BJP nominee Jangi Lal Mahajan is trailing by 212 votes against his nearest rival and Congress candidate Indu Bala.

AIADMK leads in Vikravandi with a margin of 6000 votes

AIADMK is maintaining its lead in Vikravandi with a margin of 6000 votes at the end of the third round.

The BJP is leading on one of the two seats of Himachal Pradesh where by-election was held, a state election official said. After the first round of counting, Vishal Nehriya of the BJP is leading with 1,187 votes against his nearest rival Vijay Inder Karan of the Congress in Dharamshala. The trend is being awaited for Pachhad seat. (PTI)

BJP leads on 8 seats, SamajwadiParty ahead in Rampur.

Counting to have 22 rounds:

The counting of votes for Nanguneri and Vikravandi will have 22 rounds, with postal ballot results likely to be announced in the first 30 minutes.

Counting is underway for the byelections to Nanguneri and Vikravandi.

The counting of votes in 5 seats begin

Counting of votes for Chitrakot Assembly bypoll in Chhattisgarh began on Thursday morning amid tight security. Both the ruling Congress and opposition BJP in the state are eying victory in the Naxal-affected seat, reserved for Scheduled Tribe (ST) candidates.

Counting of votes for by-elections to six Assembly constituencies in Gujarat began on Thursday morning. Over 600 government employees have been deployed for the exercise that began at 8 am in the constituencies spread across six districts, Gujarat Chief Electoral Officer S Murali Krishna said.

In Sikkim, where bypolls were held for three seats, Chief Minister Prem Singh Tamang (Poklok Kamrang constituency) is among the candidates. The strength of the ruling Sikkim Krantikari Morcha (SKM) is 18, while the BJP has 10 MLAs in the 32-member House. The Sikkim Democratic Front (SDF) is left with one MLA after several others deserted the party.   Former Indian football team captain Bhaichung Bhutia is contesting from Gangtok on Hamro Sikkim Party (HSP) ticket.

In Rajasthan, it will be an opportunity for the ruling Congress to consolidate its thin majority if it is able wrest the two seats from the BJP and its ally RLP. Of the 200 assembly seats in Rajasthan, the Congress has 106 MLAs, including the six who defected to the party from the BSP recently

In politically crucial Uttar Pradesh, the polls are seen as a litmus test for the Yogi Adityanath government which has completed 30 months in office. The BJP currently has 302 members out of 403 in the Assembly.

Counting of votes will also be held in Satara (Maharashtra) and Samastipur (Bihar) Lok Sabha seats, which were held by the NCP and the LJP respectively.

The other states where bypolls were held are Punjab (4 seats), Kerala (5 seats), Sikkim (3 seats), Rajasthan (2 seats) and one seat each in Arunachal Pradesh, Madhya Pradesh, Odisha, Chhattisgarh, Puducherry, Meghalaya and Telangana.

Among the states ruled by the BJP and its allies, counting will be held for the maximum 11 seats in Uttar Pradesh, followed by six in Gujarat, five in Bihar, four in Assam and two each in Himachal Pradesh and Tamil Nadu.