Siddhartha Has Been Chairman And Managing Director Of Cafe Coffee Day Since January 17, 2015.

Cafe Coffee Day founder and son-in-law of former union minister SM Krishna VG Siddhartha has been missing since Monday evening. Siddhartha was headed for Sakaleshpur but on the way he had asked his driver to go towards Mangaluru, according to the police. On reaching a bridge over the Netravati river in the Kotepura area in Dakshina Kannada district, he got down from the car and told his driver that he was going for a walk. When he did not return even after two hours, the driver approached the police and lodged a missing complaint.

8.30 pm: Role of some private equity players and their nominees on Coffee Day Enterprises, as also some independent directors, has come under the scanner of markets regulator Sebi in the wake of a crisis at the leading coffee chain operator due to disappearance of its founder and chief V G Siddhartha.

8.00 pm: Two leading foreign PEs --KKR and Standard Chartered PE which together own close to 12 percent in Caf Coffee Day--said they are "saddened" by the sudden disappearance of VG Siddharatha, the founder-chairman of the country's largest coffee chain, and that they enjoyed a "great relationship" with him.

5.30 pm: The Income Tax Department says the authenticity of the letter which is doing rounds on social media is not known and the signature in the letter doesn’t tally with Siddhartha’s as available in annual reports. 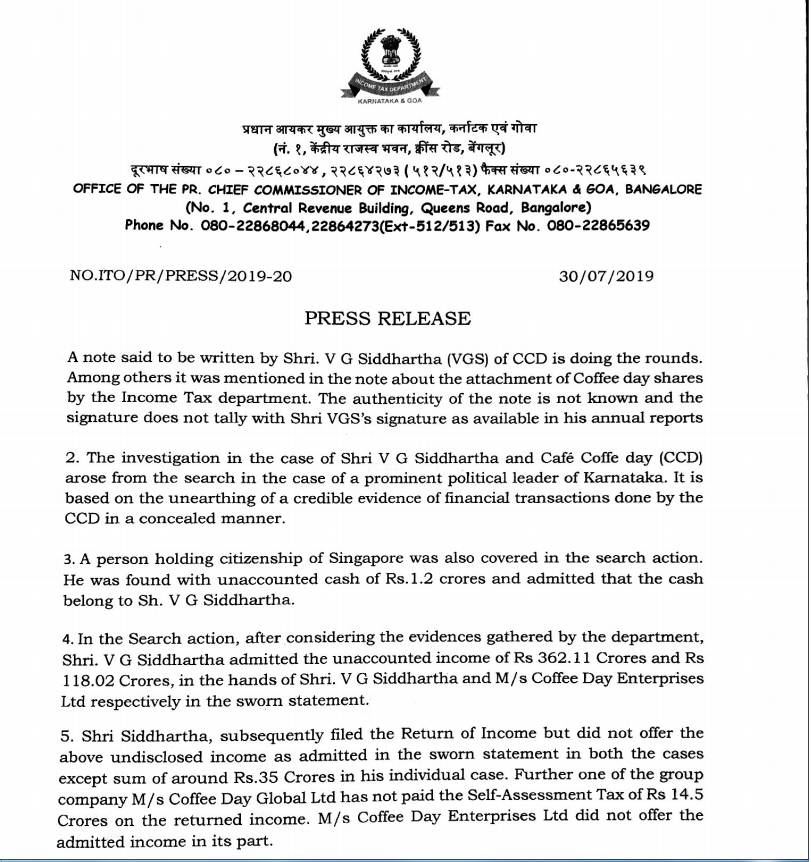 5.00 pm: "The Board had an emergency meeting today. The Board is confident that the professional management of the Company and each of the entities in the Coffee Day Group and their respective leadership team, will ensure continuity of all business operations consistent with past behaviour. In the interim, the Board is evaluating and assessing the situation, formulating appropriate steps to ensure business operations are unaffected, and has resolved to co-operate with authorities," the statement reads.

4.39 pm: Managing Director of Biocon Kiran Mazumdar-Shaw says everyone who knew KG Siddhartha is shocked, the letter reportedly written by him shows his helplessness.

4.10 pm: 'Deeply Saddened' by Disappearance of KG Siddhartha, Says KKR | Global buyout major KKR has said it is "deeply saddened" by the disappearance of KG Siddharth, the promoter of its investee company the coffee chain Cafe Coffee Day since Monday evening. KKR in a statement Tuesday said it had invested in the popular coffee chain nine years ago and part-exited the investment last year.

4.00 pm: Income Tax department officials react to the allegations in the letter purportedly written by VG Siddhartha. Official sources said the Income Tax Department has acted as per law in its probe against Cafe Coffee Day (CCD) promoter.

3.30 pm: The helicopter that was supposed to come from Kochi for rescue hasn't taken off due to adverse weather conditions, said Congress leader UT Khadar. "Even if it takes off now, we don't have much time before day light ends. We are seeing if search operations can continue through the night because 24-36 hours is crucial," he said.

1:55 pm: Rescue teams, sniffer dogs are scanning the bridge over the Netravati river.

1:40 pm: This incident is hard to believe, I've asked for an investigation. He is an asset to the country, we don't know if he is missing or someone has taken him away: DK Shivakumar, Congress on VG Siddhartha, founder-owner of Cafe Coffee Day going missing in Mangaluru.

1:30 pm: Mobile tower signals show that Siddhartha was the bridge over the Netravati River when he made his last phone call: Police sources.

12:35 pm: "Shocked by VG Siddhartha’s sudden disappearance. Hope he is safe & found soon. Siddharth is an exceptional entrepreneur who introduced millions of Indians to coffee. His is the ugliest example of how agency persecution is wrecking India’s growth story. (SIC)," said Congress leader Milind Deora.

12:10 am: The letter purportedly written by Shri VG Siddhartha which is circulating is dated July 27th: DK Shivakumar.

However, I find this utterly fishy and urge that a thorough Investigation be conducted into this matter.

Shri Siddhartha and his family were closely known to me for decades now.

I can't say I knew #VGSiddhartha but I had met him socially a couple of times. He introduced me to his ready-to-go brand of coffee (then called Drizzle, now FiltaFresh) which I still carry with me while travelling. He created an excellent brand.

11:50 am: "We are tying to cover all angles. Our focous is on the search and rescue operation. We have eight teams scoring the river land with NDRF," Deputy Commissioner of Dakshin Kannada,  Shreekanth Sentil, said.

11:40 am: Shares of Coffee Day Enterprises tanked 20 per cent and hit the lower circuit limit as well as 52-week low of Rs 154.05 apiece on BSE after news surfaced that its founder has gone missing.

11:30 am: CCD has confirmed that it's Chairman and Managing Director V G Siddhartha has been missing since Monday evening.

10:30 am: Founder & owner, Cafe Coffee Day (CCD), VG Siddhartha's letter to employees and board of directors of CCD, states, "Every financial transaction is my responsibility...the law should hold me & only me accountable."; He has gone missing from Mangaluru, search operation underway.

Founder & owner, Cafe Coffee Day (CCD), #VGSiddhartha's letter to employees and board of directors of CCD, states, "Every financial transaction is my responsibility...the law should hold me & only me accountable."; He has gone missing from Mangaluru, search operation underway. pic.twitter.com/0GJc5vmvYt

10:00 am: More than 200 policemen and divers on about 25 boats were carrying out searches for him.