The Booklet, Released During Seva Dal Training Camp In Bhopal, Has Claimed That Savarkar Had A Physical Relationship With Nathuram Godse.

A booklet released by All India Congress Seva Dal is making headlines for making several controversial decisions about Hindutva idealogue Veer Savarkar. The booklet, released during a Seva Dal training camp in Bhopal, has claimed that Savarkar had a physical relationship of homosexual nature with Nathuram Godse- Mahatma Gandhi's assassin. The booklet is titled 'How brave was Veer Savarkar'.

The passage in the booklet seems to refer to an incident mentioned in Dominique Lapierre and Larry Collins's book 'Freedom at Midnight'. The booklet said, "Before adopting brahmacharya, there is only one mention of Nathuram Godse's physical relationship. His partner in his homosexual relationship was Veer Savarkar." 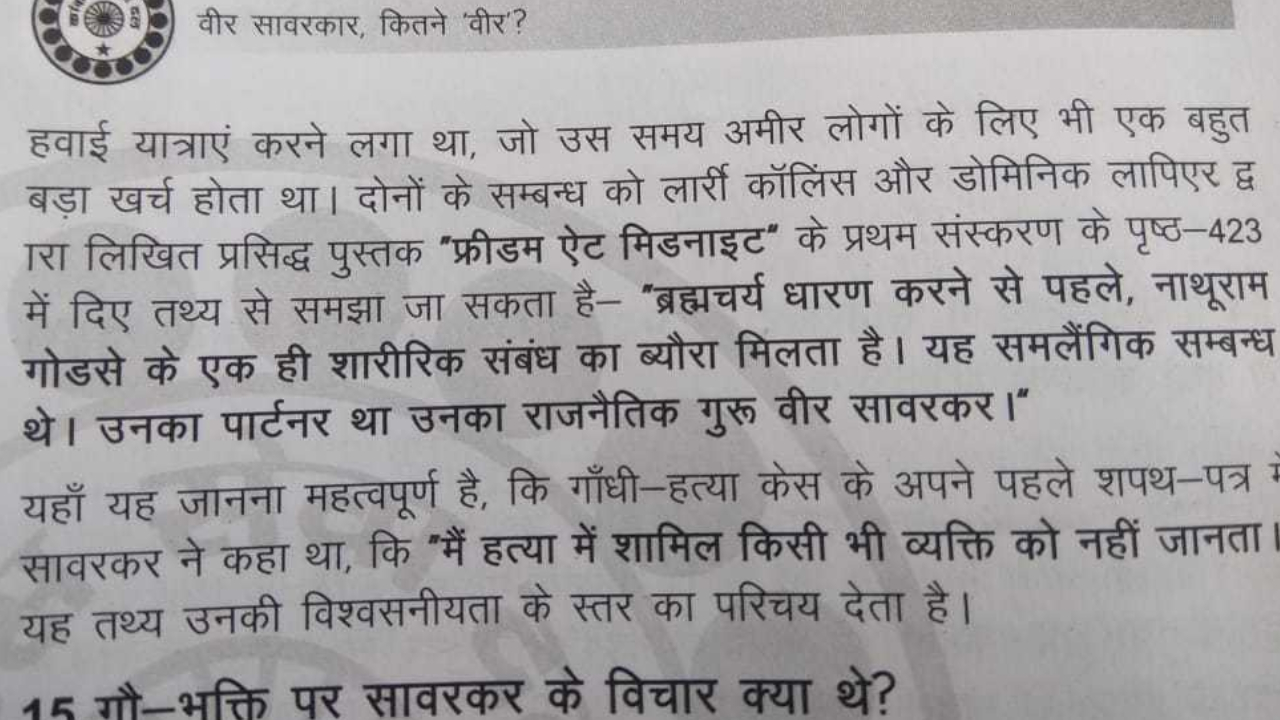 The booklet, published in Q&A format, has other controversial questions and answers also. One of the questions is 'Did Savarkar encourage Hindus to rape of minority women?'. The answer to the question is a 'yes'.

It also states that Savarkar was involved in pelting stones at a mosque when he was just 12 years of age.

The booklet also questioned Savarkar's credentials as a patriot and his reputation for valour, drawing criticism from the BJP. It alleged that Savarkar received money from the British after he was released from Andaman's Cellular Jail.

The booklet has provoked angry reactions from many supporters of Savarkar. Madhya Pradesh BJP chief Rakesh Singh hit out at the Congress over the book, alleging that the Congress was badmouthing patriots, especially those who were the well-wishers of "the majority community".

However, Seva Dal Chief Organizer Lalji Desai has backed the claims made in the booklet. Speaking to ANI, Desai said: "The writer of the booklet has written it on basis of evidence. But that is not important for us. In our country today, everyone has legal right to have their own preferences."

(The screenshot of the book has been taken from Twitter)