IMD Has Predicted Heavy To Very Heavy Rainfall At Isolated Places Such As Boudh, Kalahandi, Sambalpur, Deogarh, And Sundargarh.

Cyclone Fani it will cross the Odisha coast between Gopalpur and Chandbali by Friday afternoon. (File photo)

The IMD has issued a formal cyclone alert for Odisha, West Bengal and parts of Andhra Pradesh, and suggested evacuation of coastal areas.

The Cyclone Warning Division of the IMD said Cyclone 'Fani' (pronounced Foni) lays southwest and adjoining westcentral and southeast Bay of Bengal about 760 km south-southwest of Puri (Odisha) and 560 km south-southeast of Visakhapatnam (Andhra Pradesh) and about 660 km north-northeast of Trincomalee (Sri Lanka). 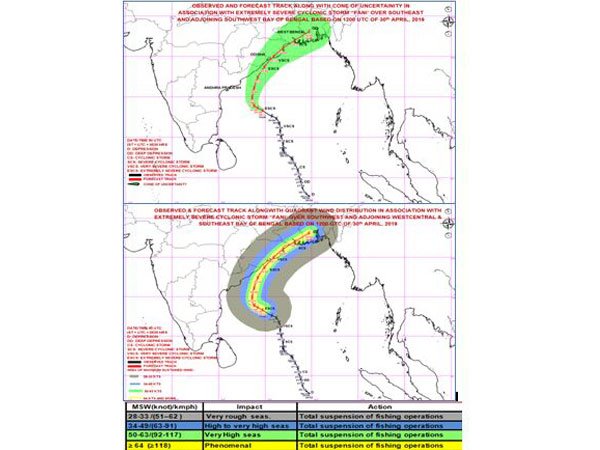 As per the disaster management division of the Ministry of Home Affairs, Cyclone Fani is very likely to move northwestwards on till May 1 noon and thereafter recurve north-northeastwards and cross Odisha Coast between Gopalpur and Chandbali. From there, it will move to the south of Puri around May 3 afternoon with maximum sustained wind of speed 175-185 kmph gusting to 205 kmph.

"It has intensified into an extremely severe cyclonic storm," Additional Director General of the IMD Mritunjay Mohapatra told PTI.

An IMD bulletin in the evening said storm surge of about 1.5 metre above astronomical tide is likely to inundate low lying areas of Ganjam, Khurda, Puri and Jagatsinghpur districts of Odisha at the time of possible landfall.

The sea conditions are very likely to be rough to very rough along and off Odisha Coast on May 2 and become high to phenomenal by May 4.Fishermen have been advised not to venture into deep sea areas of northwest and adjoining West-central Bay of Bengal along and off Odisha coast from May 2 to May 4. The expected damage due to Cyclone Fani includes -- extensive damage to all types of kutcha houses, extensive uprooting of communication and power poles, disruption of rail and road link at several places, extensive damage to standing crops, plantations, orchards, blowing down of Palm and coconut trees, uprooting of large bushy trees and large boats and ships may get torn from their moorings.