A Total Of 26 Teams Of The NDRF And The SDRF Are Patrolling The Flood-hit Areas, In Addition To 796 Personnel Devoted To Relief And Rehabilitation Work.

The death toll increased by 11 since Wednesday, when it stood at 67. The number of casualties, however, remained unchanged for Araria, Sheohar, Purnea, Kishanganj and Supaul districts.

There have been no flood-related deaths in Muzaffarpur, Saharsa and Katihar districts. Altogether 55.04 lakh people, spread across 921 panchayats falling under 97 blocks of the flood-affected districts, are said to have been hit by the calamity. 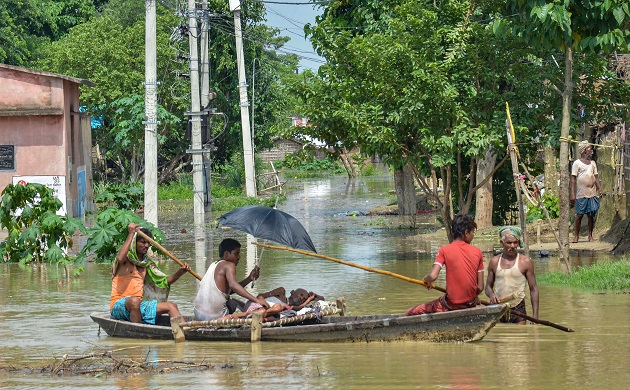 The administration has set up 130 relief camps, 126 of these in Sitamarhi and the remaining four in Madhubani, both of which have accounted for the maximum number of deaths. More than one lakh people are staying at the relief camps in Sitamarhi, while 3,721 have taken shelter at Madhubani, the department said.

The state government has installed 1,119 relief camps, spread across all the 12 affected districts, to ensure proper food and safe drinking water to those impacted by the deluge.

A total of 26 teams of the NDRF and the SDRF are patrolling the flood-hit areas, in addition to 796 personnel devoted to relief and rehabilitation work. They have been equipped with 125 boats for the purpose, the release said. A department official said there has been a let up in the downpur lashing the adjoining country, which has caused water levels to recede, though as many as six rivers flowing through the state are still above danger mark at many places.

Scenes of distress have been emerging from the inundated areas, with news channels flashing images of people carrying children in baskets on their heads in neck-deep waters. Social media went abuzz with activity as the picture of a dead toddler, lying abandoned on a tract of land washed by floods, went viral.

Many compared it with the heart-rending photograph of a three-year-old boy's body in Turkey, which had caught international attention four years ago and highlighted the refugee crisis in Syria.

However, Muzaffarpur District Magistrate Alok Ranjan Ghosh said the child had died, along with two elder siblings, when they were shoved into the swollen Bagmati river by their "mentally unstable" mother in a fit of rage.

Ghosh said Reena Devi (35), a mother of four, had herself dived into the river after a tiff with her husband. One of the children and the woman, however, survived. The incident had taken place in Sheetalpatti village under Meenapur block, and the matter is being investigated by police, Ghosh said.

Another footage, caught on a mobile phone, of a building collapsing like a pack of cards upon being hit by a gushing stream of flood water in Sitamarhi, has also gone viral. At many villages, locals have built bridge-like structures with the help of bamboos to cross canals.