Days after Deepika Padukone’s surprise visit to Jawaharlal Nehru University (JNU) in Delhi which invited widespread reactions, the skill development ministry of the government has dropped a promotional video featuring Chhappak actress where she is speaking about the acid attack survivors and Skill India, according to ThePrint's exclusive report.

The actress visited the university to express solidarity with students who were thrashed by a masked mob on January 5 (Sunday night).

"A promotional video to promote Skill India featuring Deepika Padukone was to be released today (Wednesday). It was being circulated in the Shram Shakti Bhawan (ministry office) too. But after yesterday’s (Tuesday’s) chain of events the video was abruptly dropped," a senior official in the ministry told ThePrint Wednesday.

The skill ministry had facilitated Padukone’s meeting with acid attack survivors before the video was produced.

The ministry has issued a response on the issue. The statement read, "As part of regular process under communication and promotional activity for Skill India, the team keeps getting ideas from media houses and organisations to cross promote each other. The production team had approached Skill India for promoting the subject of the film. In lieu of the same, the actors from the movie had met some acid attack survivors and specially-abled candidates from our ecosystem which are also Skill India beneficiaries inspiring them to do better in life. However, there is no formal engagement with the related party. Ministry does not assign any such stuff it is National Skill Development Authority they are the ones who take the final call."

It is heartening to see people come out and raise their voice without fear, says actor Deepika Padukone as thousands across the country take to the streets to voice their protest against the amended Citizenship Act, the National Register of Citizens and violence in JNU.  The 34-year-old actor, who is in the capital to promote her upcoming release "Chhapaak", said it is necessary for people to express their point of view to bring about change.

Also Read: 'Why Only Artistes, Any Common Man Can Go Anywhere': Javadekar On Deepika's JNU Visit

"I feel proud to see that we aren’t scared to express ourselves... I think the fact that we are thinking about the country and its future.... Whatever may be our point of view, it’s nice to see,” Deepika told NDTV India on Monday night.  "I feel proud about it that people are coming out—be it on the streets or wherever they are—they are raising their voice and expressing themselves as it is important. If we want to see change in life and society, it is important that a point of view be put forward,” she said. 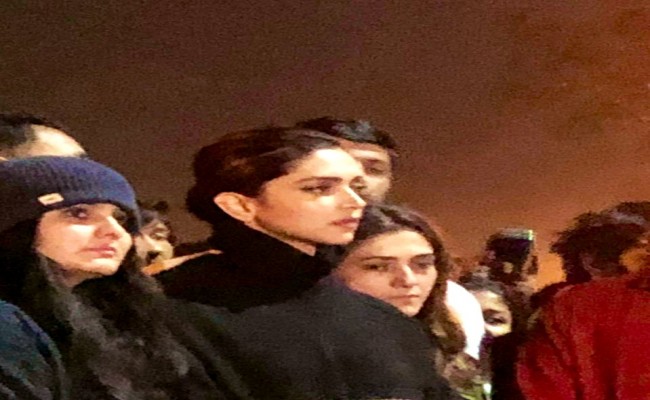 “Chhapaak”, directed by Meghna Gulzar, releases countrywide on Friday.  Meghna, 46, said she can feel the pain of the people even though she is not well versed with the issues.

Which section of JNU students is Deepika supporting? asks VHP

Amid the controversy over Deepika Padukone’s visit to the Jawaharlal Nehru University (JNU), the Vishwa Hindu Parishad (VHP) on Wednesday sought to know whether the Bollywood actor supported those who attacked the students in the campus or those who protected them.

It also termed as a “conspiracy” the manner in which violence was being used by “anti-national forces” in institutions like the Delhi’s JNU and Jamia Millia Islamia. Padukone visited the JNU campus during a public meeting on Tuesday evening and stood in silence behind JNU Students’ Union president Aishe Ghosh, who had received head injuries during a mob attack on Sunday evening.