The Aam Aadmi Party Accused Former Prime Minister Rajiv Gandhi Of â€˜justifyingâ€™ The Killing Of Innocent Sikhs In The 1984 Riots.

Amid talks of an alliance between the Aam Aadmi Party (AAP) and the Congress, the Delhi Assembly on Friday passed a resolution demanding the withdrawal of the Bharat Ratna award given to former prime minister Rajiv Gandhi, accusing him of ‘justifying’ the killing of innocent Sikhs in the 1984 riots. The 1984 anti-Sikh riots refer to the violence against Sikhs following the assassination of former prime minister Indira Gandhi in October 1984.

"Delhi Assembly passes a resolution demanding Bharat Ratna be taken back from late Rajiv Gandhi," the news agency PTI reported. The resolution moved by AAP MLA Jarnail Singh was passed by a voice vote in the House.

Meanwhile, clarifying its stand on the newly-passed resolution, AAP leader Saurabh Bharadwaj said the lines about late Rajiv Gandhi were not part of the original resolution that was placed before the house and one of the MLAs in his handwriting later proposed an addition/amendment to the same. In his tweet, Bharadwaj also added that amendments cannot be passed in this manner.

Here is the resolution where Rajiv Gandhi's name was later included in hand-writing: 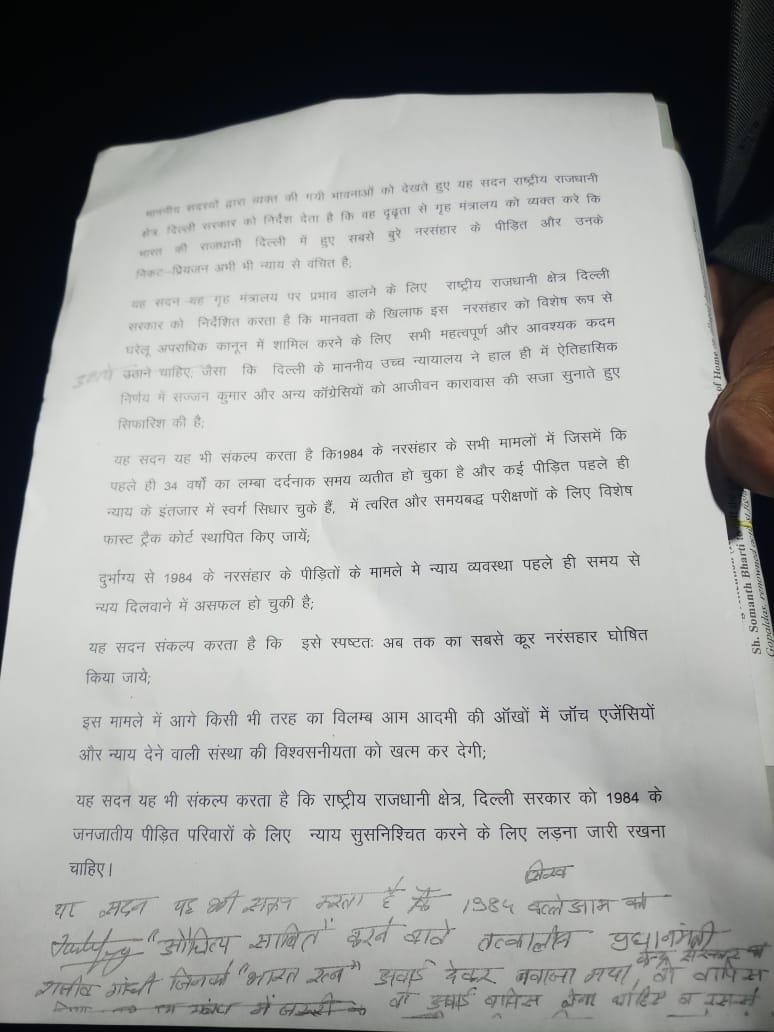 The development came days after Congress leader Sajjan Kunar was convicted in connection to the decade-old violence against the Sikh Community. Since then several AAP MLAs were equivocal in slamming the Congress for not taking action against their leaders who were allegedly involved in the riots. This all-out attack by the Arvind Kejriwal-led party seems to be detrimental for a possible alliance between the rival parties ahead of 2019 Lok Sabha elections due by May.

On November 19, AAP leader and lawyer HS Phoolka along with BJP secretary released the video of the speech delivered by Rajiv Gandhi on Indira Gandhi’s birth anniversary at Boat Club. In an apparent reference to the 1984 anti-Sikh riots the former prime minister said that "when a big tree falls, the earth shakes".

Addressing a press conference Phoolka said, "A prime minister who justifies the killing of innocent citizens, definitely does not deserve Bharat Ratna. We, therefore, call upon the government to withdraw the Bharat Ratna conferred upon Rajiv Gandhi".

"A Prime Minister who takes three years even to count the dead bodies of innocent citizens killed in open broad daylight in the capital, a Prime Minister whose party was responsible for a massacre, cannot be a Bharat Ratna. We demand Rajiv Gandhi’s Bharat Ratna’s be taken back," the AAP leader added.

The 1984 anti-Sikh riots, or what the Sikh community calls genocide, erupted in India with thousands of Sikhs being killed following the assassination of Rajiv Gandhi's mother and former prime minister Indira Gandhi by her Sikh bodyguards on October 31.