In Case The Revision Is Not Possible At This Stage, The Doctors Demanded, AIIMS, New Delhi, Be Made Ex-Officio Member Of The National Medical Commission At Least In Its First Term.

The associations of AIIMS and Safdarjung resident doctors, who have been on a strike in protest against certain provisions of the NMC Bill, decided to withdraw their stir, resuming of all services from Monday, i.e. August 5, 2019. The development comes hours after Union Health Minister Harsh Vardhan met representatives of RDA at his Delhi residence around 7 am this morning.

In a statement, the Resident Doctors Association (RDA) said, "General Body Meeting of RDA, AIIMS was convened today and Executive Committee conveyed decision of withdrawing strike and resuming of all services by Resident Doctors immediately, provided AIIMS clarifies that strike period (Aug 1-3) will be considered as on duty".

During the meeting, the executives of RDA AIIMS put forward the apprehensions of the students and the resident fraternity across the nation regarding some provisions of the National Medical Commission (NMC) Bill. While Vardhan tried to clear their doubts and queries related to the bill, he is further requested to amend the same.

In case the revision is not possible at this stage, the doctors demanded, AIIMS, New Delhi, be made Ex-Officio member of the National Medical Commission at least in its first term.

Meanwhile, Vardhan assured doctors that all the apprehensions, including Section 14(I) para-2, admission into undergraduate courses at AIIMS New Delhi, Section 15(5) admission into AIIMS, New Delhi vide National Exit Test and Section 32 (Community Health Providers) will be duly addressed while drafting the NMC bill after it is constituted.

The doctors are also promised that the representatives of RDS and Student Union of AIIMS will be consulted before framing of regulations of the NMC Bill, vide Section 57 of the bill. 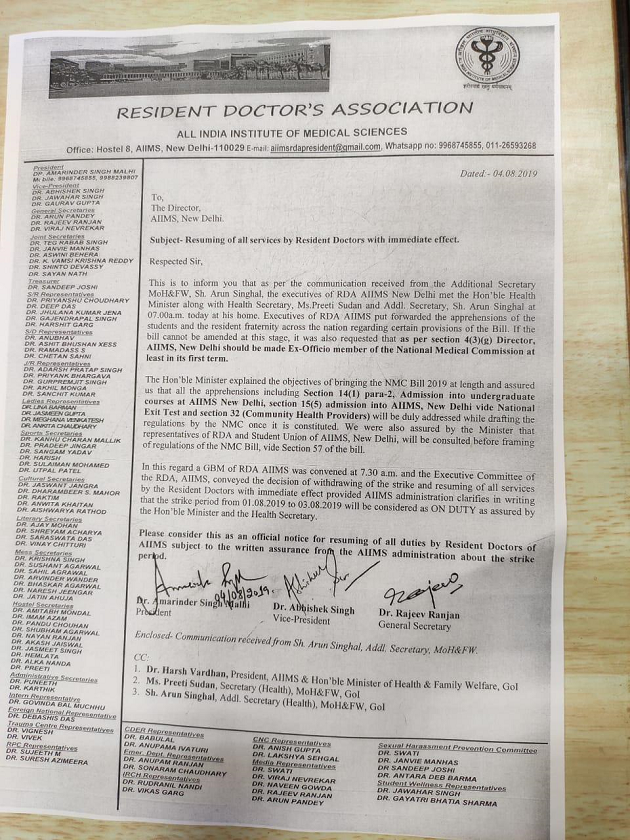 The NMC bill, which seeks to replace the Medical Council of India (MCI) and usher in major changes in the country's medical education sector, was passed 260-48 by a voice vote in Lok Sabha on Thursday. It also proposes a common final year MBBS exam, to be known as National Exit Test (NEXT), for admission to post-graduate medical courses and for obtaining license to practice medicine.

The Bill would act as a screening test for foreign medical graduates. Besides, the national entrance test (NEET), common counselling and NEXT will be applicable to institutes of national importance like AIIMS in order to achieve a common standard in medical education sector in the country.